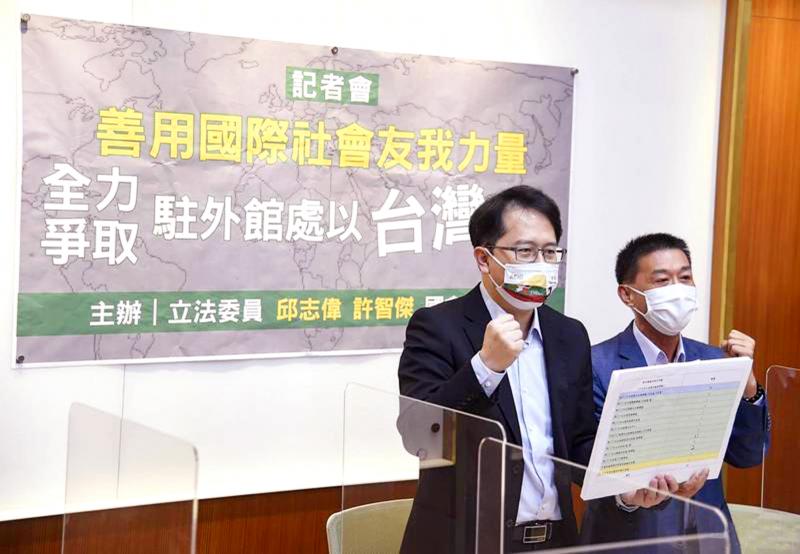 The Taiwan Representative Office in the Republic of Somaliland, inaugurated last year, is the only representative office using the name, and a planned office in Lithuania is expected to become the second.

The lawmakers made the remark at a news conference at the Legislative Yuan in Taipei calling on the Ministry of Foreign Affairs to establish a task force for this purpose.

The Taiwan Representative Office in the Republic of Somaliland, inaugurated last year, is the only representative office using the name, and a planned office in Lithuania is expected to become the second. Official embassies in countries with formal ties with Taiwan bear the name “Republic of China (ROC).”

The nation’s representative offices, predominantly named Taipei economic and cultural offices, have long referred to themselves by the capital’s name instead of the country itself, Chiu said.

These offices should be renamed to underscore Taiwan’s status as an independent and sovereign nation, and its desire to be internationally recognized, he said.

All Taiwan’s representative offices — including those in the US and Japan — should be renamed, Chiu said.

The international situation is favorable to Taiwan at the moment, and the ministry must not let this opportunity to promote the country go to waste, he added.

A European Parliament resolution calling for stronger Taiwan-EU ties is a historic opportunity to rectify the names of its offices in Europe, Hsu said.

A representative office bearing the name “Taiwan” is planned in Lithuania, and the ministry should consider renaming other offices in Europe when that office is established, he said.

Ministry spokeswoman Joanne Ou (歐江安) said that the ministry appreciates the lawmakers’ suggestion, but a representative office can only be renamed with the host nation’s consent.

By Lu Yi-hsuan and Jonathan Chin