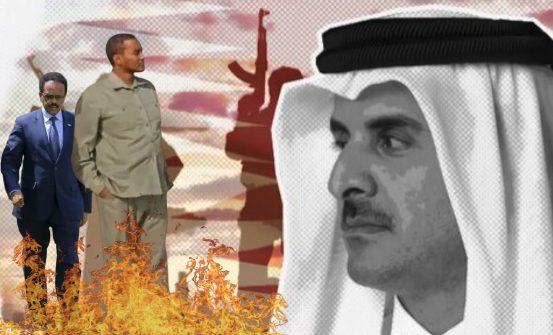 On Wednesday, February 22, 2017, at an inauguration ceremony attended by over 1200 people including two presidents, a prime minister, and more than 100 diplomats, Mohamed Abdullahi Farmaajo, the ninth President of Somalia, promised to restore Somalia’s dignity and bring peace and reconciliation to the country.

In his inauguration speech, the new President also promised to tackle head-on the widespread insecurity and instability in the region as well as to prioritize the elimination of political corruption, address the poverty crisis and deal with the humanitarian catastrophe that is destroying the nation.

During his address, the President also thanked the African Union Mission in Somalia (AMISOM) for securing a transparent and honest election process.

The Special Representative of the United Nations, Michael Keating, was present at the inauguration and delivered the following goodwill message on behalf of the UN Secretary-General, Antonio Guterres…

“The peaceful handover of power is a major step in strengthening Somalia as a federal and inclusive state and towards the goal of achieving one-person-one-vote elections in 2020.”

As we look back at that Wednesday afternoon more than four years ago, two things are crystal clear.

NY May Pay Off Your Home If You Live Near New YorkComparisons.org

One, the optimism of that day has been replaced by the depressing and stark realization that Somalia is in a far worse state than it was before President Farmaajo took office.

And two, every single word (that was) spoken that day was a lie.

For more than four years, the security of our citizens has been ignored in favor of building an administrative environment of nepotism and political exploitation.  For more than four years, our economy has been on the verge of collapse as political instability, the ever-looming threat of terror, and the lack of a viable plan to combat the coronavirus is slowly pillaging the citizen population.  And for more than four years our foreign policy has been, at best, unfocused, as allied states have become alienated and new relationships are being formed with countries willing to submit to the unlawful underground impulses of a man with more regard for his personal wealth and status than the wellbeing of his citizens.

Farmaajo’s four-year term in office expired on February 8, yet he has remained illegally and unconstitutionally holding the office as “Acting President” until the country’s long-delayed presidential election will be held end of the year.  This resulted in a cycle of brutal violence on the streets of Mogadishu and proved beyond a shadow of a doubt that this transition has been anything but a peaceful handover of power.

The legacy of this President will be one of total corruption, collusion, and cronyism.  He has been accused of obstruction of justice in his attempt to shield his Svengali, Fahad Yasin, the Director of the National Intelligence and Security Agency (NISA) of Somalia, from suspicions related to the disappearance of 24-year-old Ikran Tahlil.  He also refused to allow the Attorney General to participate in the investigation, knowing full well that the findings would likely result in consequences that he is not willing or able to face.

The Ikran Tahlil case, unfortunately, is not the first time that the disappearance of a Somali citizen was a leading talking point in the debates of the merits of a Farmaajo administration.  Qalbi Dhagax was a Somali national who was rich with patriotism and filled with naïve aspirations for a better life for his people.  And he willing to die for those beliefs.  A mere six months after the Farmaajo election in 2017, the government illegally extradited Qalbi Dhagax to Ethiopia in what has been alleged to be a sacrificial offering in a sinister plot to establish a diplomatic relationship with Ethiopia.

It is abundantly clear that the rules of established government play absolutely no role in the Farmaajo administration.  In a recent and very public clash with Prime Minister Mohammed Hussein Roble regarding the investigation into Tahlil’s disappearance, Farmaajo blatantly and willingly ignored longstanding Parliamentary rules when he asked the outgoing speaker of the Parliament, Mohamed Mursal Abdirahman to publicly condemn Roble’s decision to swear-in a new security minister, a move largely believed to be coordinated by the President himself.  And a move that dishonors the Constitution and renders the Federal Parliament compromised and ineffective.

All of this is well known to our nation, and now we must make it clear to the global community and to our international friends.  The words of this administration ring hollow when the actions are wholly totalitarian, and the government is clearly being led by a ring of corrupt politicians concerned only about personal welfare and individual wealth.

And all the money being funneled to the Somali government by, among others, the United States and the European Union, under the pretext of humanitarian aid, is simply being used to fund a crooked and contaminated administration.  And the citizens of these countries should be outraged at how their tax dollars are being spent.

This President has caused enough damage.  The only question that remains is can we remove him from office before the destruction he’s inflicted becomes permeant.