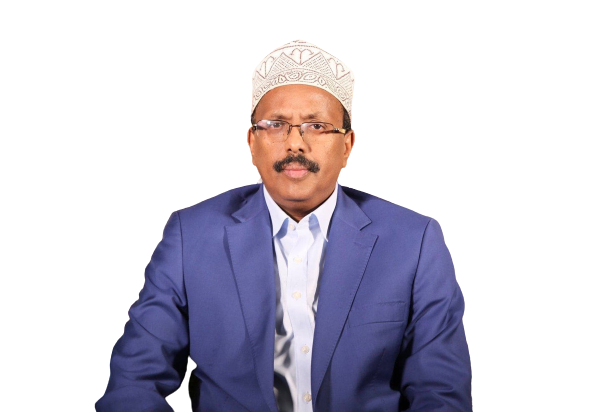 After two decades of repressive dictatorial regime ousted with bloody popular uprising in 1991, the Somali people has been longing for a visionary and competent leader – a “founding father”- passionately committed to establish a democratic state governed by the rule of law and not by the whims of powerholders. The impartial administration of the rule of law for equal justice is the only way to attain a sustainable peace, stability, and development in Somalia. The misfortune of experiencing self-serving, corrupt, incompetent, and divisive leaders has continually frustrated the Somali people’s aspirations for better future. Nevertheless, the struggle and hope for getting the right leader persist despite the current bleak prospect.

In the last four years, Somalia suffered the misfortune of being ruled by a ruthless and remorseless predatory group, controlled by usurper Mohamed Abdullahi Farmajo whose presidential mandate ended seven (7) months ago, hell-bent to exploit the fragile situation Somalia is in for personal gains. Farmajo has sanctioned all kinds of criminal activities – assassinations, arbitrary detentions, intimidations, patronage, fraud elections, and corruption – for instilling fear for control and loyalty.

The predatory group backed by Ethiopia, Eritrea, and the Emirate of Qatar has subverted the implementation of the democratic system of governance and embarked on building an autocratic system of governance. Immediately after his election on February 8, 2017, Farmajo has veered off from the right path of honoring his constitutional obligations for unity and respect of the rule of law and started violating openly and systematically the fundamental principles of the constitution, particularly the separation of state powers between the legislative, executive, and independent judiciary for transparency, accountability, and efficiency, and the power sharing between the federal and state governments.

As a result, indisputably, the situation of Somalia has dramatically worsened. Early on, many independent experts voiced their concerns about the wrong and dangerous direction the country has taken. Unfortunately, the voices of reason and goodwill felt on deaf ears. The report of the AU-UN Independent Commission issued on May 20, 2021 bared the political, economic, and security failures Somalia suffered under Farmajo. Therefore, the commission recommended the extension of the African Union Forces (AMISOM) mandate till 2027. A preliminary agreement on the extension has been signed with AU.

For months, the parents of 5,500 youths illegally recruited and sent to Eritrea for fishy purpose in 2019, and the mother of Ikram Tahlil, a cybersecurity specialist, member of the National Intelligence Service Agency (NISA) last seen riding in NISA car on June 26, 2021 to meet Fahad Yassin and his deputies, have been asking Farmajo and Fahad Yassin information about the fate of their children dead or alive. Because of unwarranted secrecy, no one else in the federal government has had reliable information about both cases. Unfortunately, as it has become the norm, both leaders never bothered to respond to the distressed parents and to the Somali people as required by their duties. This inhuman behavior has angered the public.

On September 2, hours after VOA broadcasted investigative report on the case of Ikram Tahlil, a message posted on NISA Facebook page, later relayed by the federal government media, claimed that Ikram Tahlil was killed by the terrorist group Al Shabab, without shred of evidence. Categorically, Al Shabab denied responsibility. The public angrily rejected NISA’s unsubstantiated claim. Based on credible evidence, the family of Ikram repeatedly declared that Fahad Yassin and three other officials are responsible of their “missing” daughter. The case, which has shaken public conscience, symbolizes long list of victims believed to be killed mysteriously by NISA assassins with no follow up investigation, report, and accountability.

It was absolutely wrong the participation of usurper Farmajo and his camarilla in the Somali politics after May 1, 2021 when the Somali National Salvation Army forced him to rescind the illegal two year term extension announced on April 12, 2012 because the rescindment signified repudiation of his leadership anymore. The mutiny of the Somali National Salvation Army,  triggered by widespread denunciations  of the Somali people and the International Community against the illegal term extension, saved Somalia from bloodshed and destructions.

The banning of Farmajo and his Camarilla from participating in the Somali politics is the only way to avert the dreadful prospect of post elections’ unmanageable disaster. The international partners of Somalia have the primary responsibility of issuing a joint statement decreeing the exclusion of Farmajo and his camarilla from the political process to spare Somalia from turmoil and total collapse.

On April 30, 2021, the New York Times published an article under the headline: “The Bureaucrat from Buffalo who Pushed Somalia to the Brink.” The article affirmed what the Somali people discovered after the first year of Farmajo’s presidency, which is “his failure to transfer the democratic values he learned during the three decades he lived in America to his native country, Somalia, when he was elected president.” He relishes the friendship and advices of the authoritarian leaders over the democratic supporters.

Sadly, today the overwhelming majority of the Somali people regrets Farmajo’s election in 2017 as president for the irreparable harm he has done to Somalia. Anyone who had basic knowledge about government and was familiar with the general situation of Somalia could have easily detected the hollowness and impracticality of the surreal promises and statements Farmajo was making to win election. Many are still sad for why they failed to see his Machiavellianism and meanness.

It’s my guess that the intense political desire to change President Hassan Sheikh Mohamud for different reasons among them to dispel the specter of clan dominance has suppressed the necessity to scrutinize the leadership qualities of candidate Farmajo. After election, Farmajo didn’t waste time to reveal his true aim of power grab with the help of foreign powers for personal gains.

Thus, it is folly to expect that while usurper Farmajo and his Camarilla are in the corridors of power, the elections under way will usher in a peaceful political transfer of power that could revive the destroyed hope of rebuilding the Somali State. The prediction is that the federal elections rigged three years ago will plunge Somalia into unmanageable disaster that will thwart the future feasibility of the Somali State.

It’s tragic and inexcusable the behavior of James Swan, head of UN Mission for Somalia (UNSOM), Madeira, Head of AMISOM, diplomats of US, UK, and EU, officials of the World Bank and IMF to close their eyes on the stalemate, abuses, and corruption that continued for four years under their watch. They wittingly chose to aid and abet the wrongdoing of Farmajo government to the detriment of Somali citizens. They let the Somali people down.

Caretaker Prime Minister (PM) Mohamed Hussein Roble appointed on September 17, 2020 has been nonfeasance for seven months because he kept himself back from fulfilling his constitutional responsibilities as head of the federal government. That changed on May 1, 2021 when the Somali National Salvation Army forced Farmajo to repeal the unlawful two year term extension and return to 17 September 2020 electoral agreement. That marked the resumption of the Caretaker Government period under article 103 of the provisional constitution, which prescribes that “the Prime Minister and the Council of Ministers shall continue to serve in a caretaker capacity to carry out routine duties.”  The Caretaker government is the only legitimate authority which runs the country during the election period. The President and the federal parliament whose terms ended, cease to exist and operate. Articles 60, 90 (o), 91, and 103 stipulate no term extension of federal president and parliament. No law can amend the constitutional provisions.

The public, the leaders of the federal member states, the opposition forces, and the international community have expressed full support to PM Roble first to guard against further wrangling and second to fulfill his overall responsibilities as head of the caretaker government. Unfortunately, Farmajo represents an obstacle to the working of PM Roble and the National Consultative Council. It’s absolutely necessary to rein him in before Somalia descends into abysmal chaos.

It’s worth remembering the words of Chinua Achebe who said, ‘there is nothing basically wrong with the Nigerian character.…The Nigerian problem is the unwillingness or inability of its leaders to rise to the responsibility, to the challenge of personal example which are the hallmarks of true leadership.” PM Roble should rise to his responsibility with courage, determination, and competence, and the International Partners should support unambiguously the Caretaker Government and the National Consultative Council in fulfilling their tasks.