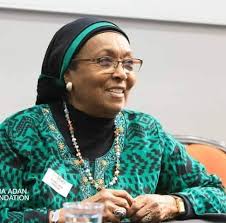 A very special woman was in Salt Lake City over the weekend from a far away land.

She has brought about incredible change to her homeland of Somaliland – a small country located on the horn of Africa.

“This is Somaliland, a peaceful country, that has just celebrated 30 years of stability,” said Edna Adan Ismail.

It’s a time of celebration for 84-year-old Edna Adan Ismail and the people of Somaliland.

They have a brand new, full-service hospital, thanks to doTERRA, an essential oil company from Utah County.

“Once again, (thank you) a thousand times,” she said.

The fully-equipped hospital would also not be possible without the incredible work of Ismail, an activist who has spent her life bringing about change for good – a Mother Teresa-type of Somaliland.

“If I can make a change in the lives of those who had fewer opportunities than we’ve had, why not? That’s what we’re here for, that’s what makes life worth living,” she said.

Ismail is the daughter of a prominent medical doctor and went on to become the first-trained midwife, the first woman to have a drivers license.

She also started a nursing college that has over 1,000 students, 70 percent of which are young women.

The now 84-year-old built a hospital and later became the first female foreign minister of Somaliland.

“It’s us together, men and women, to work together in positive areas of health and development and progress,” said Ismail. “Without that partnership, progress does not happen.”

Ismail was in Salt Lake City over the weekend for doTERRA’s convention and sat down with KSL Radio’s Boyd Matheson.

She believes Afghanistan can now learn a lesson from Somaliland about women leaders.

“They contribute to the development of the country. They partner in community needs. Health needs them. Social services need them,” she said.

An incredible woman in a far away land that has influenced millions.

“We should wake up in the morning and say, ‘What needs fixing today,’ and go and fix that that you can fix,” said Ismail.

She said in 30 years, Somaliland has rebuilt itself.

She said they now have women lawyers, doctors, surgeons and a dentist.