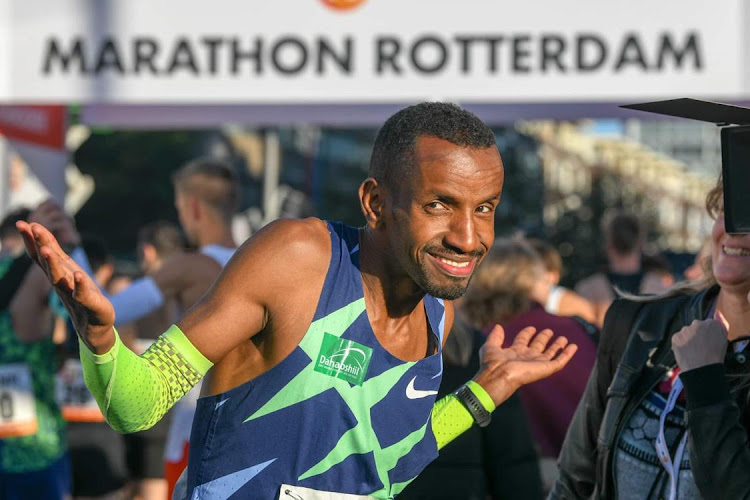 Abdi, who is supported by Dahabshiil Group, also broke the European marathon record of 2:04:16, set in 2019 by Kaan Kigen from Turkey.

Somali born Belgian Bashir Abdi smashed two records to win the 40th edition of the Rotterdam Marathon that was held on Sunday (24) in Rotterdam, Netherlands.

The Somali-born Belgian athlete, who won the marathon bronze medal at the 2020 Tokyo Olympics took, charge of the race at the 38km mark and never looked back to break the course record of 2:04:11 that was set in 2019 by Marius Kipserem, setting a new mark of 2:03:36.

Abdi, who is supported by Dahabshiil Group, also broke the European marathon record of 2:04:16, set in 2019 by Kaan Kigen from Turkey.Two-time winner Kipserem was forced to settle for second place but with a new personal best of 2:04:08.

Dahabshiil group of companies were among the first to congratulate the newly-crowned champion as they took pride in his success.

“We are proud of Abdi’s performance at the Rotterdam Marathon today. His victory is not only for himself but also for Africa. We take pride in associating with such a young successful African athlete. He is an inspiration to the African youth,” Dahabshiil stated.

Most of the big contenders in the men’s race ran as a group in the early stages, passing through 10km in 29:17 before reaching the half-way point in 1:01:57, suggesting Kipserem’s course record of 2:04:11 was under threat.

Soon after reaching 25km in 1:13:33, Kipserem forged ahead and broke up the lead pack, hitting 30km with a 12-second lead over Ethiopia’s Dawit Wolde with Abdi a further five seconds in arrears.

But Abdi and Wolde caught up with Kipserem again by 35km, reached in 1:42:33, while Kenya’s Titus Kipruto was 20 seconds adrift of the lead trio.

Soon after, Abdi made his decisive move and broke away from his remaining opponents before going on to win in 2:03:36.

His winning time took 40 seconds off the previous European record, set by Kigen in Valencia two years ago, and places Abdi 14th on the world all-time list.