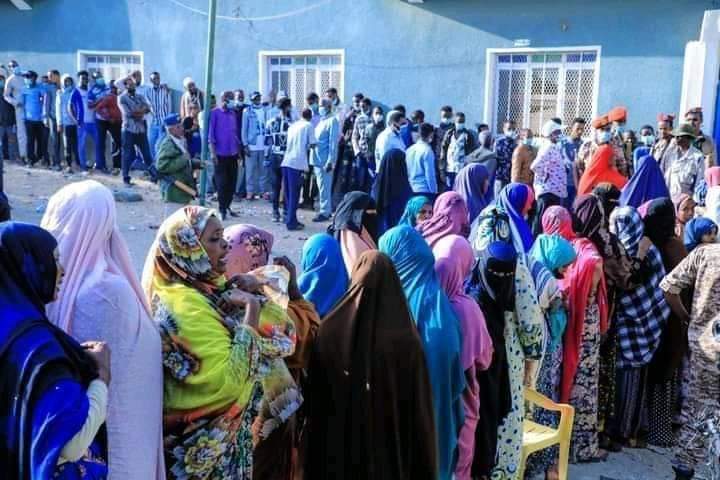 LIEOM Somaliland, part of the international observer mission during the May 31 parliamentary and municipal elections, propose significant changes to the Republic of Somaliland’s electoral process – as advanced and state-of-art as it be. 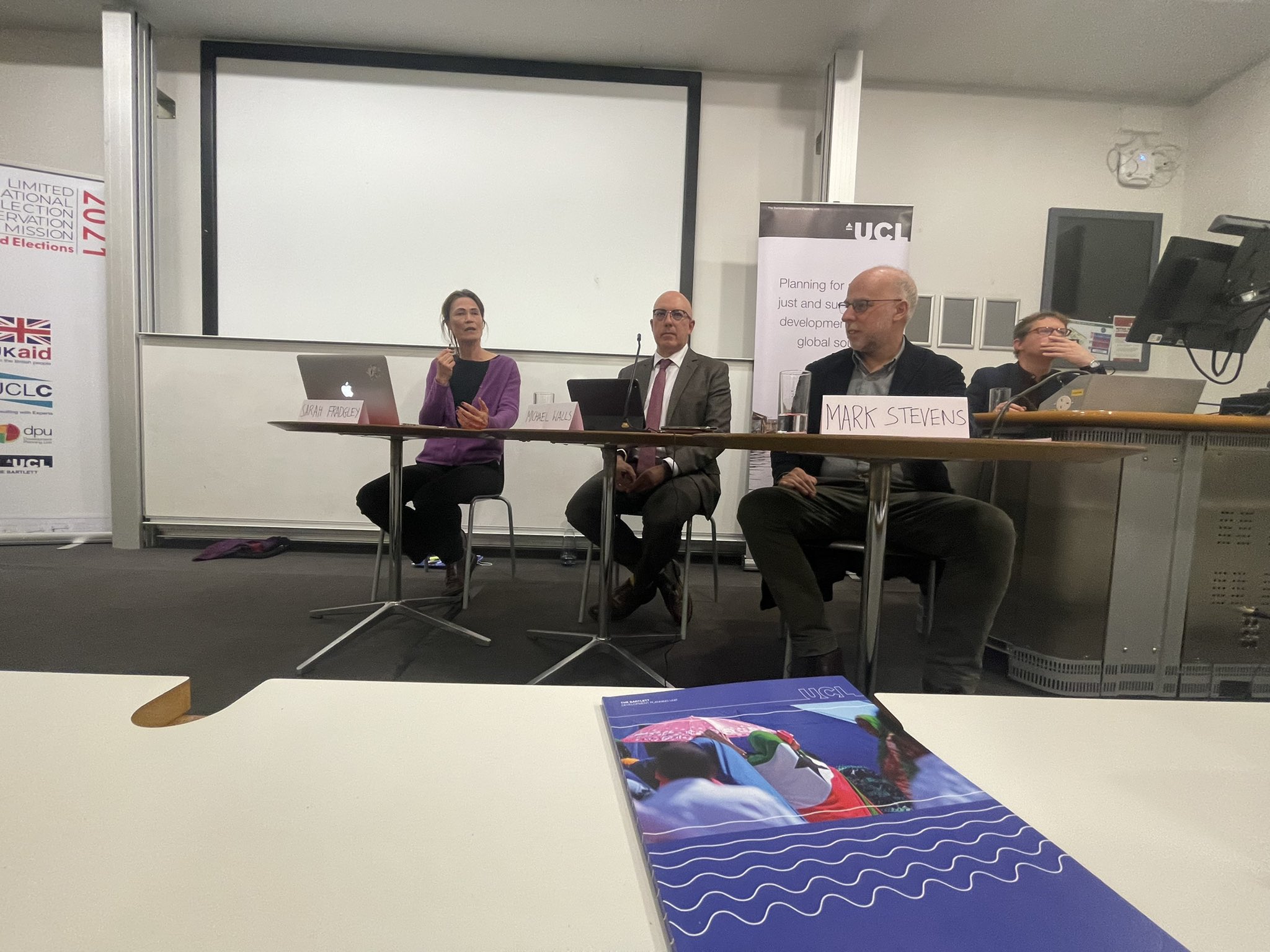 LIEOM points out that, to bring the election process to an international standard, Somaliland needed to give a closer look at a seemingly restrictive registration process, the inclusion or exclusion of female representation to higher elected posts, and an unbreakable commitment to election schedules.

“..the mission calls for three profound changes: reform of the restrictive political system in which only three political parties are permitted to contest elections, which severely curtails democratic representation; Somalilander-led legislative measures to ensure female political representation; and political re-commitment to the agreed constitutional electoral timetable so that future elections are held on time, banishing the long tradition of electoral delay in Somaliland to the past,” a statement the independent body released body stated in part.

““While these elections represent democratic progress, they were held 11 years after the originally envisaged expiration of the parliamentary term, and more than three years after council elections were due. It is good news that they were peaceful and accepted as credible by stakeholders. However, uniquely in Africa, not a single woman was elected to Parliament. This is a serious democratic deficit, even marking a step backwards from past, already low, levels of female representation. While it is cause for celebration that Somaliland has continued to hold elections, it is also time to focus on seeking ways to strengthen the procedures in place for the next poll, due in 2022 and those that take place after that,” Professor Michael Walls of DPU, Chief Observer on the mission said

The LIEOM team heavily underlined, however, that Somaliland held the elections under difficult circumstances seeing to it that its international image as a committed democracy was not blemished.

“The elections, which occurred under the challenging circumstances of the Covid-19 pandemic, and under Somaliland’s consolidated General Law for National Elections and Voters’ Registration, represented progress along Somaliland’s democratic path. There were many positives, notably the election of a member of a ‘minority’ clan to parliament, the improved electoral law (albeit still with too much left to the discretion of electoral and political authorities), and the fact that media coverage was generally regarded as balanced and responsible. Importantly, election day itself and its aftermath passed off peacefully, with Somalilanders once again turning out enthusiastically to vote,” the statement said.

The full report so contrasts a sham selection that Somalia called elections where members of the lower house of the federal parliament of Somalia were being picked from Somaliland-born migrants living in Mogadishu. So-called, masked delegates were herded into a closed space in  one of the former military bases in Mogadishu to select MPs ‘representing Somaliland’.

In Somaliland, Somaliland-born people in Mogadishu are seen as economic migrants, mercenaries and traitors to the people and 31-year-old government of Somaliland.

Neither MPs nor ministers or other members of the Somalia federal government whatever level of authority they might be cannot set foot on Somaliland soil. If they do so and are caught they face the wrath of its judicial system.

The Republic of Somaliland, as this report and many before it attested to, picked its MPs independent of Somalia on a 20-year-old 1person-1vote election process.

The LIEOM report comes exactly five months after the elections were concluded. 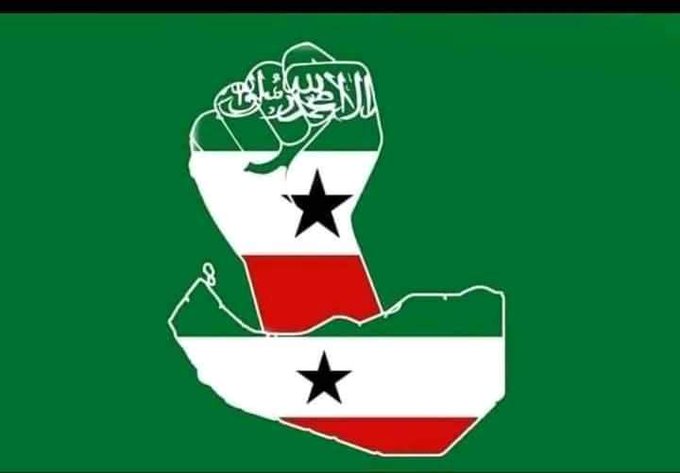 READ THE Press Release on report BELOW: 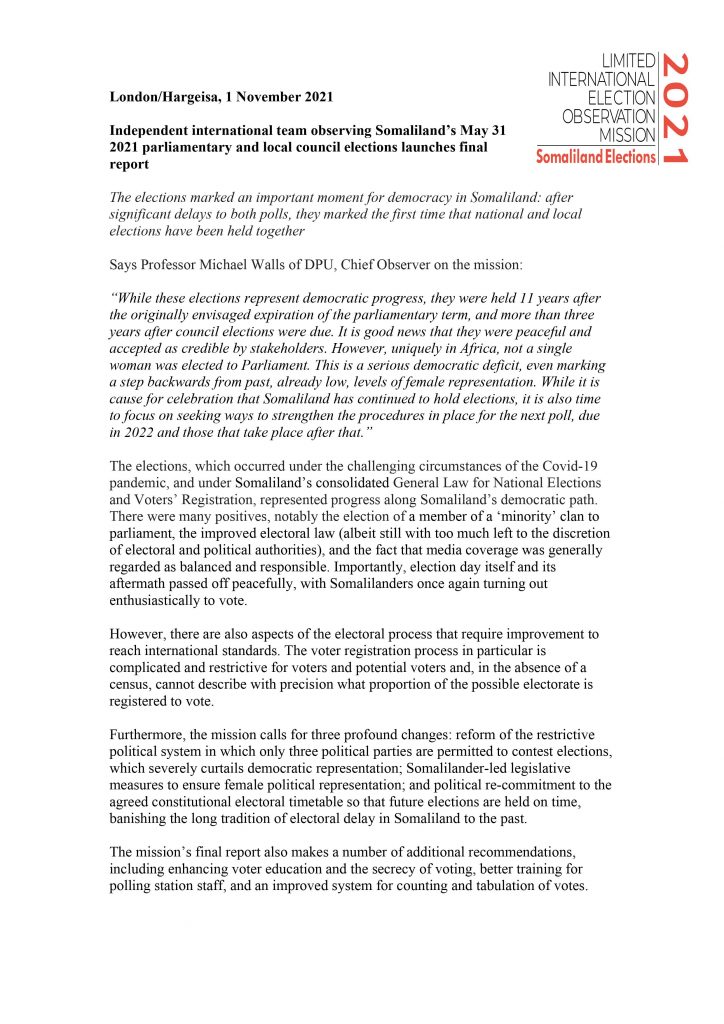 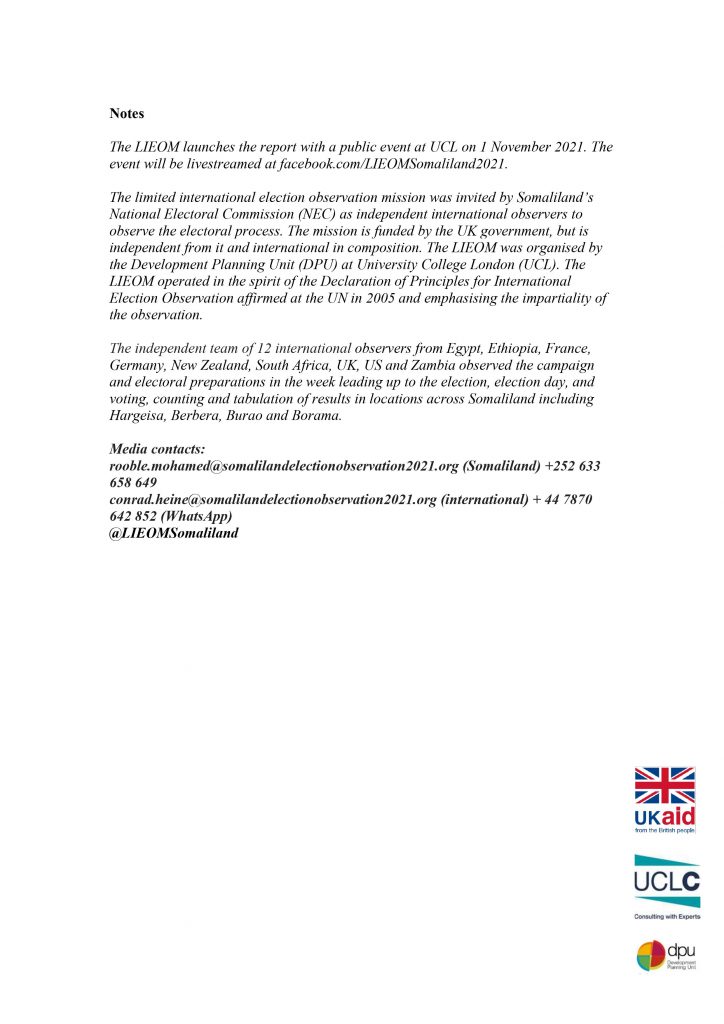