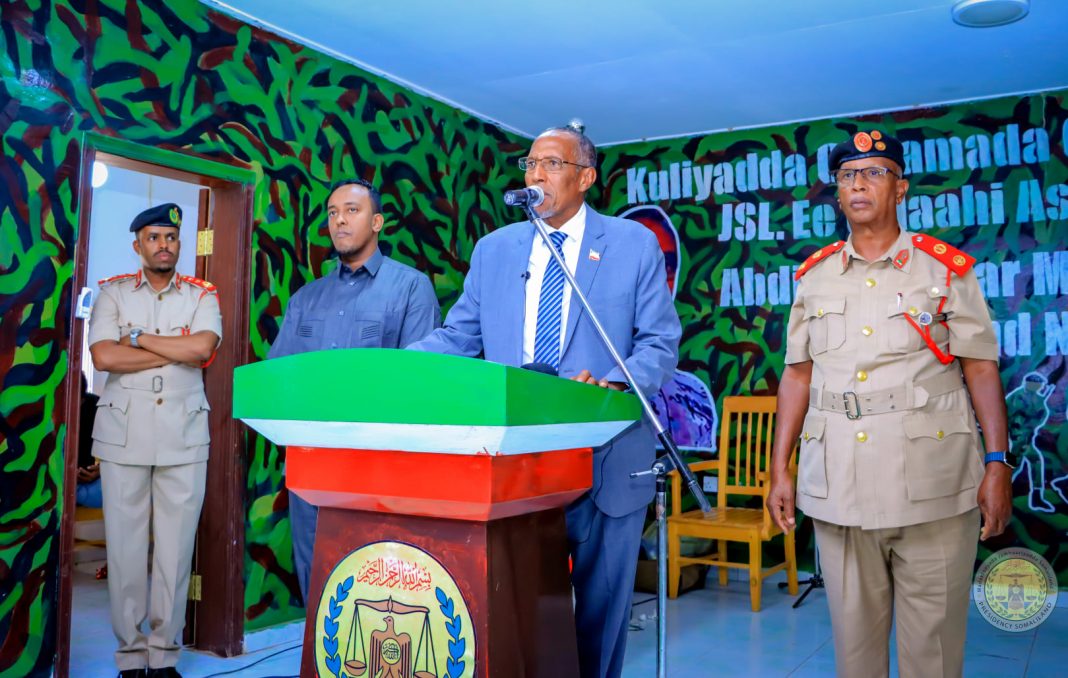 Addressing the seventh graduating batch at the Abdullahi Askar Officers’ Training College of Dararweine, outside the capital, Hargeisa, Monday, His Excellency the President of the Republic of Somaliland, gunned out several heavily loaded messages to the nation and the world, some of which clearly conflicting or laden with controversies.

Congratulating the 410 officers who got promoted to second lieutenants at graduation, the President first underlined the contribution the graduates would make to both the internal and external security of the nation.

By doing so, the President tripped on his words several times.

President stated that the Political Associations and Parties Registration Committee will declare new political association open and, from thereon, will continue its work until it identifies the 3 associations that will be certified as political parties for the next ten years.

“Three elections are slated for the year. The first will be that of the political associations RAC will declare registration of political associations open in June (2022). The three existing parties will have the same rights as the new associations. The associations will run (against each other) in order that 3 political parties to emerge. The presidential election, next, is scheduled for 13 November. How these could be applied is a matter for the state to decide. Following closely is the selection of the Guurti (the upper House of the bicameral parliament) which also entails a lot of work,” President Bihi stated in one breath.

By stating that the political associations election was to be the first of the three elections took almost everyone by surprise because no known consensus has been reached on which election comes first. Opposition parties always maintained that the presidential election was to lead the elections and that they had every right to participate as they were since their political life was to expire a month later in December.

Saying that the existing parties will be treated the same as new associations, the president practically (a) brought the expiry date of the Kulmiye, UCID, and Waddani parties forward; (b) denied opposition parties the right to end their legally mandated term; (c) reduced them to a level that they had to run against new associations – a statement that had legal basis since no law stipulating existed or has been recently passed; (d) created mistrust between the two opposition parties since the President met with Waddani founder and presidential candidate alone recently in a discussion whose agenda has not been released to the public; and, finally (e) the President gave new impetus, new propulsion fuel to proponents of the opening of political associations and their right to run against them in the upcoming presidential election since the old parties had only a month of life after the date slated for the election, and that parties guaranteed of a ten-year term could run in that election.

The president’s statements tilled the ground, planting new seeds for discord and controversy.

Secondly, the President calling the leaders of Russia and Ukraine to unconditionally stop fighting, recalled the horrors of war and the devastation it meted in people’s lives based on the Somaliland experience.

Reminiscing these horrors, President Bihi spoke emotionally of his first-hand experience as a witness.

“Hargeisa in the 1988 bombardment was 17km from east to west and 13 km from north to south. Imagine 60 batteries of artillery guns of every caliber and make and 30 tanks mounted above it letting go of salvo after salvo on a city of civilians. Russia is not shelling Ukrainian civilian targets as Somalia did then,” he said.

Then the president tripped on the second set of contradictions.

“Thank Allah, we have peace and stability today. We offer an olive branch to everyone. But for those that we once shared a state who keep making threats against us, let it be known that we will teach a more telling lesson than we taught their fathers,” he said.

In effect, President Bihi offered peace on one hand and war on the other at the same time.

President Bihi, obviously, was recalling in his mind direct and indirect inferences to the use of force on Somaliland that Somalia’s present and past leaders repeatedly made in order to compel the 31-year-old democratic republic to renounce the restoration of its 1960 independence in a grand conference held in Burao in May 1991. Since then, however, Somaliland rose from the ashes of destruction to build the only viable democracy in the Horn of Africa with little outside help where Somalia is still hand-fed, in turmoil and with no structured, central governance showing despite the billions of Dollars the international community is pumping into it and hundreds of lives the world sacrificed to keep it propped up.

However the political chess pieces are moved, Somaliland, for certain, is in for verbal barrages to be exchanged.