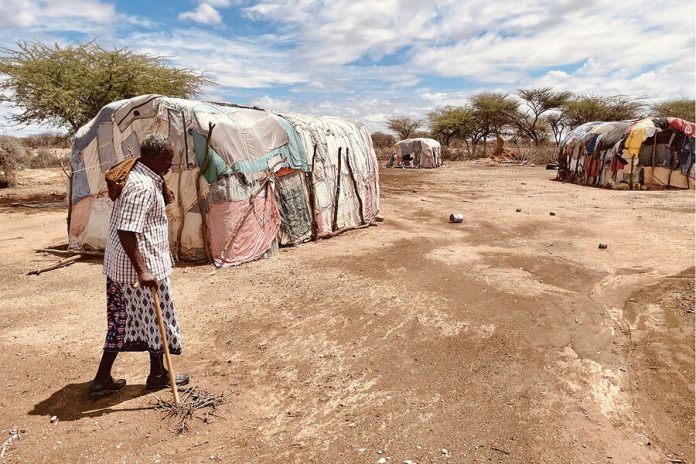 ‘If our animals survive, we do.’ Somaliland grapples with drought.

The downpour was too little, too late.

After weeks of drought, the single night of rain brought more tragedy to Safiya Abdullahi, a goat and camel herder in Somaliland. “We lost a third of our animals. They were so weakened from lack of food and water they got stuck in the mud,” she says, surveying the dead animals outside Qool Cadey, a desert hamlet in Somaliland.

Even as she dragged a dead goat away from the cluster of fabric-covered huts where she and her family live, Ms. Abdullahi remained stoic.

“I should not complain, other families in the area have lost more,” she says. “If things get worse, our neighbors will share their food and water with us, God willing.”

But few of her neighbors have much to share.

Across the Horn of Africa, three consecutive failed rainy seasons, and a slow start to a fourth one, have pushed parts of Somalia, Ethiopia, and northern Kenya to the brink of famine amid the worst drought in 40 years. And the 20 million people in the region who could require urgent food assistance by year-end face a double blow: Russia’s war in Ukraine – a key global exporter of grains –  is pushing food prices to record levels.

In Somalia alone, including the breakaway region of Somaliland, hunger has doubled since the start of 2022. “More than six million people, nearly 40% of the population, face acute food insecurity by midyear,” says Alessandro Abbonizio, communications officer for the World Food Program in East Africa. At least 81,000 people face catastrophic hunger – a situation marked by extreme levels of malnutrition and a high likelihood of death.

In better times, pastoralists like Ms. Abdullahi drink the milk and eat the meat provided by their animals. Now, the drought has forced families to desperate measures. “These days we eat a mixture of shredded wheat, maize, and water, the same food we feed the animals,” says Sahara, a herder living 25 miles south of the regional capital of Hargeisa, as her three young children huddle around her.

Even such meager diets are increasingly difficult to procure. “Things are getting more difficult by the day. The cost of wheat and corn has gone up almost 50% since the beginning of the year,” says Mahamud Hassan, who lives with his parents and five younger siblings in the southern Maroodi Jeex region, an area classified by the Famine Early Warning System as one step below famine.

Herders in the area have lost many animals in recent weeks due to the ongoing drought. But solutions are emerging. “There are ways to make pastoralism sustainable,” says Francesco Rigamonti, an Oxfam official.

That’s partly due to a war taking place over 2,500 miles away. Together, Ukraine and Russia account for nearly 30% of the world’s wheat production and a fifth of global corn output.

“Up to 90% of the wheat consumed in East African countries comes from Ukraine and Russia, so disruptions in global food supply chains hit these communities very hard and at a time when affordable food is most needed,” notes Lia Lindsey, a senior humanitarian policy adviser at Oxfam America.

And the consequences of food shortages extend beyond hunger, says Francesco Rigamonti, a regional humanitarian coordinator for Oxfam. “Parents keep their kids at home because school is expensive. And there’s a dowry system [in parts of the region], which means that some families marry off their daughters at a younger age because the husband’s family pays them a certain amount of money,” he says.

“We also see an increase in violence at home because of the stress the situation places on families.”

Last month, donors pledged some $1.4 billion in emergency aid to help alleviate the food crisis – a huge sum, but one that aid agencies say covers only the bare minimum of needs. And pouring money into such crises doesn’t necessarily resolve long-term issues.

But a growing number of local organizations are offering homegrown initiatives they hope will build resilience against adverse climatic events.

“It is late for those who already perished, but not too late for those that are on the verge of collapse,” Dr. Hussein Haji, director of the Somali Agriculture Technical Group said in an e-mail. Future interventions, he says, should focus on “climate smart agriculture.”

Dr. Haji’s organization is already rolling out solutions that can bolster farmers’ ability to withstand future droughts. They include relatively simple measures, from introducing the use of early maturing, higher-yield varieties of staple crops such as sorghum and maize, all the way to the use of drip irrigation systems, which significantly reduce the use of water.

In southern Somalia, the group hosts demonstration sites where pastoralists learn about techniques to improve fodder production, which could help families like the Abdullahis and Hassans reduce livestock deaths and boost milk yields significantly.

Governments have also taken steps to reduce their reliance on ad hoc aid interventions by international organizations. In response to previous droughts, Kenya and Ethiopia have set up permanent social safety nets through which cash is allocated to vulnerable families. The idea is to create a buffer that helps communities cope with problems before they turn into full-blown crises.

In Somalia, where weak central government authority previously hampered similar efforts, the World Food Program has helped create a population database that is being used to deliver financial assistance to those affected by drought. The organization plans to transfer the system’s operation to the government in the future.

“There are ways to make pastoralism sustainable,” says Mr. Rigamonti, the Oxfam official. For starters, doing so requires empowering rural communities, instead of making decisions over their heads. “Cattle, goats, sheep are so important to people here. People’s identities are closely linked to their livestock.”

It is a sentiment echoed by Mr. Hassan: “If our animals survive, we will survive.”