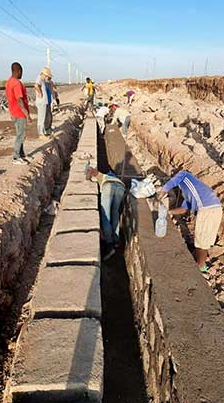 Djibouti was expected to begin the construction but failed to do so, as negotiations with Ethiopian officials took longer than anticipated, and the duo are yet to reach an agreement over the future use of the railway line.

“Djiboutian government wants us to sign a binding agreement to only use their port for the next 15 years, if they construct the line and other facilities,” said an official who is part of the negotiation team.

A year ago, a cornerstone was laid for the construction of a line connecting the Awash Depot with the main railway line, unloading facility, and Awash-2 railway station. It is a part of the railway project that connects the Awash-Wolidia-Kombolcha-Haragebya railway with the Addis Ababa-Djibouti line.

China Civil Engineering Construction Corporation (CCECC), one of the contractors that participated in the construction of the main railway line, is hired as the main contractor of the project a year ago.

Ahmed Tusa, director-general of the Petroleum and Energy Authority, said Ethiopia has completed 30 percent of the project and is expected to be completed next year.

“However, the necessary work on the Djiboutian side has not begun yet. Our progress does not make a difference unless the Djiboutian government does the same at their end,” said Ahmed, admitting the prolonged duration of the negotiation is becoming a roadblock to turn this into a reality.

An attempt by the Ethiopian government through its Ambassador, Berhanu Tsegaye, to settle the difference with Djibouti over the matter also bore no fruit.

“With the current progress, we will be challenged to meet our target to fully substitute fuel trucks with our fuel wagons,” said Ahmed.

Ethiopia has a total of 1,500 wagons, of which 110 of them are dedicated to transport fuel. However, they have not been in use since the railway line was launched.