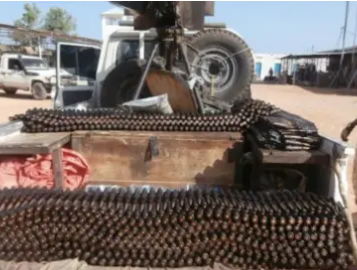 Weapons were directly supplied to the Puntland Security Force in Somalia but after the US withdrew, the group split and fought internally over control of the US-supplied assets.

At least 22 people including 2 children were killed, and dozens more injured, by US-made weapons that were directly supplied to a Somali counter-terrorism force that split and fought internally over control of US-supplied assets, VICE World News can confirm after an independent review of the weapons involved.

The deadly violence took place late last year over days of battles among fighters from the Puntland Security Force (PSF), a militia that the CIA created and which Navy SEALS have been mentoring since the early 2000s. The PSF was built to fight the al-Qaeda-backed militant group al-Shabaab. Its headquarters are in Bosaso, a major port city in Puntland, a semi-autonomous, coastal state in Somalia’s north.

Three of Saciid Shidow’s children – aged 8, 12 and 35 – were killed and four – 6, 8, 9 and 13 – were injured when a mortar hit his house a little after 7AM at the end of December. The children were at home because their school had been closed due to the fighting. Shidow works as a cook for the staff of an infrastructure company outside Bosaso, nearly 500 miles from the city. He told VICE World News he was at work on the morning of the attack and found out after receiving a call from one of his surviving sons. He does not like to speak of what happened, it causes him great pain.

The mortar fire also damaged a hospital, the State House and local businesses, and, along with the overall fighting, caused the reported displacement of about 100,000 people – nearly half of the population of Bosaso. The mortars involved in the fighting were all made in Arkansas.

The violence itself was, at least indirectly, also prompted by US influence: the PSF had split and was in an internal bloody political brawl over the military resources that the US had supplied the group before about 750 American military personnel withdrew in January 2021, in what was one of the final acts of the Trump administration. Earlier this week, less than 24 hours after Somalia elected a new President, US President Joe Biden announced he approved a plan to send “under 500” ground forces back into Somalia, reversing the Trump administration’s decision. The returning troops will be training Somali forces. It is unclear if any will go back to the Puntland area.

When they withdrew last year, US forces took the majority of their arms with them but US-made mortars, as well as guns from other sources like battered AK-47s among other kit, remained. An internal security assessment leaked to VICE World News notes that mortar shelling caused much of the death and destruction in Bosaso at the end of 2021. “A mixture of 81/2 mm, as well as 60 mm mortar shells, were fired into the civilian community, killing and wounding a number of civilians,” the document reads.

Some of the mortars that the US left behind had been made for training purposes, and the PSF also deployed those wildly in the fight. “The shelling seems to have been random, and into civilian areas,” the leaked report says.  Indeed, photos and video from Somali news, and others shared on social media from the time of the fighting show buildings and shops peppered with holes.

One video segment from Puntland State TV focuses on damage to Ayaan hospital, the main hospital in town, and a hospital staffer who was killed. “We were in a very precarious situation, sandwiched between two warring forces,” Dr Hinda Jama Ahmed recalled in the state TV clip. Ahmed said that she and others had slept in the hospital for three days because they could not get out safely. Speaking of Mohamed Abdi, the staffer who was killed, Ahmed said he was “the backbone of the hospital.” According to the doctor, Abdi was killed around 11:30 at night by mortar fire while he was bringing food to others. The doctor also said the clashes prevented the hospital from caring for patients – including wounded soldiers. “We were under siege,” she said. “We couldn’t even send our medical staff to go out and help those in need since firing was coming from both sides.”

The PSF has long been considered one of the most successful militias in countering al-Shabaab, and Puntland is one of Somalia’s most comparatively stable states. At approximately 600-strong, the group is largely autonomous, operating independently of Somali government control. Exactly who then owns the PSF and its many assets – especially a US-funded compound in Bosaso which houses plentiful weapons – has never been explicitly stated. This lack of clarity was a significant contributor to the tension in the PSF when the US withdrew. “The USA trained and equipped forces and left us without making the proper handover and configuration,” a Somali researcher told VICE World News. The researcher did not want to be named out of concern for personal security because of the sensitivity of the topic, which implicates a number of powerful Somali families and the Somali and US government.

When US forces withdrew under Trump, Somalia was mired in an election dispute that just concluded on Sunday, after over a year. The fighting between PSF soldiers in Puntland is an extension of that greater national political turmoil which had been building in the country for the last few years. It has made room for the expansion of al-Shabaab, the fundamentalist insurgent group the PSF and others were formed to combat. ISIS-Somalia also has a small presence in Puntland. During the December standoff, PSF soldiers even moved from frontline positions where they were combatting al-Shabaab, back to their Bosaso headquarters to fight each other. The fighting in Puntland stopped at the end of the year. When it stalled, attention turned to presidential elections in the national capital, Mogadishu. Puntland’s president, Said Abdullahi Deni, was ahead in the pack running for the President of Somalia, though he did not win

When asked if conflict between the PSF in Puntland might resume the Somali researcher said, “Yes, I strongly believe it.” The researcher explained that the fundamental power struggle between the powerful family and the Puntland state, which both claim the PSF and its assets, has not been solved.

The PSF is part of the legacy of the militias that the US armed and backed in the early noughties in the name of combatting terrorism. The CIA began building up the force in 2002, and about a decade ago, Navy SEALS took over the mission of training and supporting the unit. In creating it, the US empowered a single family dynasty, the “Dianos”, that directed the militia for three generations. First Osman Abdullahi Diano, then two of his sons ran the group.  In 2018 Mohamed Diano replaced his brother Asad Diano, who ran against the current President of Puntland for the state leadership role. Their mother was the head of projects and logistic support to the PSF.  Other family members were put in similarly plum positions. This primed the family to stand up various other entities related to security, especially allegedly, a fuel company, which further benefited from American counterterrorism support.

As the US withdrew in early 2021, Somali politics was becoming increasingly tense. At the end of the year, in late November, the current President of Puntland fired the director of the PSF for vague reasons allegedly related to issues with promotions.

The PSF director, however, refused to leave, arguing that his family owned the PSF. The group then itself divided between loyalties to the two directors. Anecdotal reports suggest that most PSF soldiers stayed with the force itself and the new commander, but the ones that remained loyal allegedly had access to the better US-made weapons and controlled the compound, allowing them to mount a fierce fight. “The whole fact that they [the Diano family] went to war with the Puntland state and the argument was ‘this is our own project’ – that kind of tells you,” a Somali analyst told VICE World News over WhatsApp. Like the researcher, the analyst requested anonymity for security reasons. “They thought the PSF belonged to them. They still do.” Before the brawl, in early December, it was reported that traditional elders got involved to try to stymie the bloodshed. Notably, the elders ruled that while the firing was legal, the group decided that the buildings, weapons and vehicles that the PSF uses belong to the Diano family. The ruling was deemed politically motivated, but is, regardless, indicative of the extent to which the US funded one individual family.

“The US’ support to the establishment and maintenance of the PSF clearly has had political ramifications in Puntland, which may not have always been clear to the US or also downplayed at times in the face of counter-terrorism objectives,” Omar Mahmood, the Senior Eastern Africa Analyst for the International Crisis Group told VICE World News. “Oftentimes external actors operating in Somalia want to build institutions, but instead end up more strongly supporting individuals as a means to get there. Support to the PSF appears to have been subject to this familiar trap.”

In response to questions a representative from US Africa Command (AFRICOM) did not deny the presence of US-made mortars. A representative told VICE World News over email, “Though AFRICOM continues to provide assistance to Somali partner forces, the primary tools of our engagement strategy include security force assistance programs, military-to-military engagements, and operations — all activities are closely coordinated with the US embassy country team and the government of Somalia.”

The representative also noted, “US forces were not involved in any partner nation military operations in Puntland during the December timeframe, nor has the command received any civilian casualty claims against the US government.” Neither representatives for the government of Puntland, the PSF nor Puntland officials responded to requests for comment.

“Weapons dispersion stemming from US arms transfers frequently leads to inevitable consequences such as civilian casualties and other negative, unintended effects to US security,” said Jordan Cohen, a defence and foreign policy analyst at the CATO Institute who focuses on arms sales. “This has happened across South and Central America, Afghanistan, and now, Somalia. A significant degree of transfers are being provided to Ukraine right now and these examples show what can go wrong.”

The weapons supplied to the PSF were against UN sanctions. In a 2016 report, the UN Security Council noted “with concern” that the US had not complied with the regulations ahead of supplying the weapons. Jay Bahadur, who served as the arms group expert for the Council until 2019 noted that mortars – the weapons that killed Shidow’s children – are a particularly problematic element in an urban environment like Bosaso. “The introduction of the mortars adds an element to the conflict that you haven’t traditionally seen in Puntland,” he told VICE World News.

In early March, Puntland’s President reappointed Diano to the Directorial position, demonstrating, to a Somali analyst who requested to remain anonymous for safety, “the outsize influence of the PSF that they can force the state to capitulate to them.”

“Ultimately the situation is a clear lesson that every external intervention has a political angle, and that the pursuit of counterterrorism objectives in Somalia should always be considered with this in mind,” Mahmood, of Crisis Group, concluded.

In December the humanitarian organisation Save The Children released a statement saying it “is deeply saddened by the reports of children being killed and displaced in the recent conflicts in Bosaso in the Puntland state of Somalia.” Because of the sensitivity of the topic, Save the Children would not elaborate on the statement.