SomTribune
Home World News/International Politics/Diplomacy Somaliland: Is the US AFRICOM Already Bedding Down in Berbera? 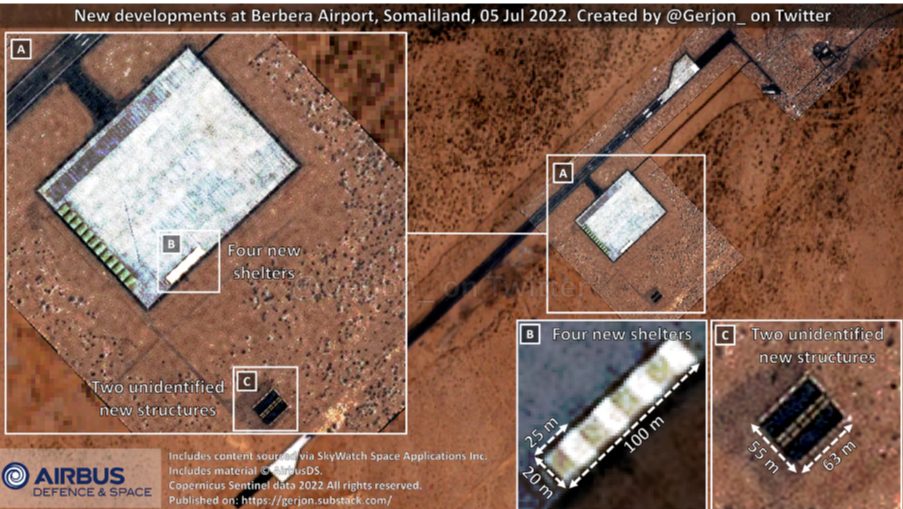 Various sources of information including satellite imagery now suggest this increased partnership may be starting to take shape. In this blog post, I will summarize some aspects of the relationship between the United States and Somaliland and explain why I think this cooperation may be taking shape.

US AFRICOM, Berbera and Somaliland

31 years ago, Somaliland broke away from Somalia and claimed independence. Even though it is a de facto state, independence was never recognized by the international community, including the United States.

On 12 May 2022, a United States delegation visited Somaliland’s capital city Hargeisa, followed by a visit to Berbera, located on shores of the Gulf of Aden. I previously looked into this visit to Berbera. Besides a description of the visit, the thread attached to the tweet below contains more information about the history of the airport, so just click on the post in order to read it.

🇺🇸U.S. AFRICOM forces seen at Berbera Airport in Somaliland. Shown: 1x KC-130J, 1x C-146A, 2x V-22 arriving at the military apron and a group of Land Cruisers driving to the terminal via the runway. This airport has a pretty interesting geopolitical history involving 🇺🇸NASA👇🏻

On the day of the visits, a United States Marine Corps (USMC) KC-130J reg. 169533 was tracked flying over Somaliland, including a landing and take-off at Berbera. This same KC-130J can also be seen in video footage made at the airport.

According to US AFRICOM, the meetings focused on “mutual benefits from closer U.S. cooperation with Somaliland authorities”. They add that a cooperation between “[US] AFRICOM and Somaliland’s military and coast guard will advance shared interests in regional stability, protecting vital trade routes”.

A BBC article summarizes some of the reasons why Berbera is of interest to the United States. First and foremost the airport is located on the shores of the Gulf of Aden, a major shipping route. Furthermore, it “is close to some of the world’s most unstable places, including Yemen, Somalia and Ethiopia, which has been a key US ally in the ‘War on Terror’ but is now wracked by internal conflict.”

The United States currently have a large military presence at Camp Lemonnier, which is located just south of Djibouti–Ambouli International Airport in Djibouti, sharing a runway. According to US AFRICOM, Camp Lemonnier “provides, operates and sustains superior service in support of combat readiness and security of ships, aircraft, detachments and personnel for regional and combatant command requirements; and enables operations in the Horn of Africa while fostering positive U.S.-African Nation relations”.

In recent years, Djibouti has seen an increased presence of Armed Forces from around the globe, including Japan, France, Italy and most importantly China: a Chinese Naval Base is located only about 10 km from Camp Lemonnier. In 2018, there were multiple instances of Chinese lasers interfering with U.S. military aircraft.

Berbera is located about 230 km southeast of Djibouti, and would offer more space and privacy for United States military operations. The United States already recognized the benefits of Berbera in 2021: In Aug 2021, a 50-person US AFRICOM survey team visited Berbera for inspection and “consult[ing] with relevant authorities”, a recent (Jun 2022) United States National Defense Authorization Act (NDAA) report states. In Dec 2021, a U.S. Congress delegation also visited Somaliland, including Berbera.

According to this recent NDAA report, the U.S. Secretary of Defense should provide a report containing “recommendations for expanding the security partnership with Somaliland and its potential contributions to U.S. military objectives in the Horn of Africa and Red Sea Region”. This report is to include “a range of areas for possible cooperation, including port access, military training, joint exercises, and intelligence sharing that can promote regional stability, enhance maritime and border security, and assist in deterring the trafficking of humans, wildlife, weapons, and illicit goods”

From all of this, it becomes very clear that the United States is showing great interest in Berbera Airport.

According to a Berbera News report dated 04 Jul 2022, American troops have taken full control of security at the airport. According to the report, all Somaliland staff has been sent on a 12-day holiday, and “the UAE official1 at Berbera Airport returned home”. They add that “a number of military planes” landed at Berbera on 03 Jul 2022, followed by “a large number of US planes” on 04 Jul 2022.

I have not yet been able to find evidence that these flights did actually take place. It is possible that U.S. Military aircraft would not be using ADS-B, or not even using Mode-S, for the short flights from nearby Camp Lemonnier to Berbera. This would make the flights invisible to the general public.

However, there are indeed signs for recent activity at Berbera Airport. Sentinel-2 satellite imagery shows that something was constructed on Berbera’s main apron in the period following 21 Jun 2022.

A closer look at this structure (using SPOT satellite imagery, dated 05 Jul 2022) reveals that this consists of four shelters or canopy buildings, perhaps similar to those of HTS Tentiq, each at a size of 20 x 25 m, or 20 x 100 m in total. Two more new and unidentified structures are located some 300 m further Southeast.

At this point in time, it remains unclear by whom and for what purpose these structures were created. However, they first appear around the same time American presence at Berbera Airport was confirmed.

The United States and Somaliland are developing increasingly close ties. These ties are relevant to Somaliland in their strive for international recognition of their independence. The United States on the other hand may be looking for a new base on the shores of the Gulf of Aden, to serve as a potential future alternative for the increasingly crowded Djibouti–Ambouli International Airport and Camp Lemonnier.

In the past week, unconfirmed news reports claim multiple flights to Berbera Airport and claim American presence at Berbera Airport. These claims have not yet been proven. However, they do coincide with newly developed structures identified at the airport, seen on satellite imagery. At this point in time, it remains unclear why and by whom these new structures were developed.