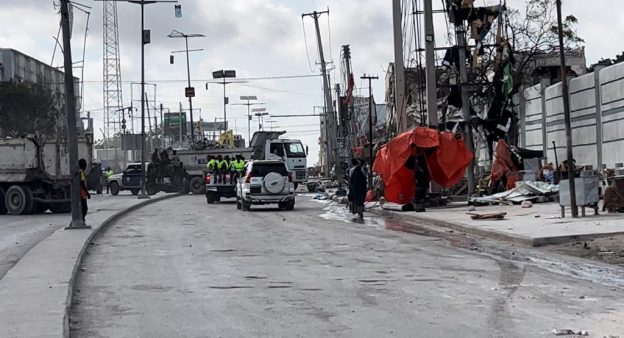 The armed group Al-Shabaab must end its indiscriminate attacks against civilians and the Somali authorities must also ensure that civilians are protected, Amnesty International said today, after a twin car bombing in Mogadishu on Saturday, claimed by Al-Shabaab, killed at least 100 people and injured more than 300 others.

The bombings, claimed by the armed group Al-Shabaab, targeted the ministry of education building and took place on a busy market intersection in the Somali capital. Numerous children and elderly people were among the victims. On Saturday evening, President Hassan Sheikh Mohamud warned that the death toll could rise further.

“Amnesty International sends its condolences to all those who have lost loved ones following Saturday’s appalling and senseless attacks. Al-Shabaab’s callous actions are crimes under international law and it is absolutely crucial that all those suspected of criminal responsibility for this crime face justice in fair trials,” said Muleya Mwananyanda, Amnesty International’s Director for East and Southern Africa.

“Al-Shabaab specifically designed the attack to inflict massive civilian casualties. Intentionally targeting civilians in an armed conflict is a war crime and, as such, all states are permitted to exercise jurisdiction to investigate and prosecute. Al-Shabaab must immediately stop carrying out attacks on civilians, and the Somali authorities must ensure that victims’ families are offered justice, truth and reparation.”

Following the bombings, devastated friends and relatives of victims shared accounts of what happened on social media. Many are still searching for missing family members. Mogadishu’s hospitals are currently overwhelmed as they seek to support those injured in the attacks.

Al-Shabaab must immediately stop carrying out attacks on civilians, and the Somali authorities must ensure that victims’ families are offered justice, truth and reparation

The ongoing conflict between the government of Somalia and Al-Shabaab continues to have a devastating impact on the country’s civilian population, with all parties to the conflict continuing to commit serious violations of international humanitarian law — with no justice, truth or reparation.

In May 2022, Somalia’s new government identified maintaining national security and combatting Al-Shabaab as its top priority. Since then, the armed group has responded with both indiscriminate and targeted attacks against civilians, as well as assassinations and summary killings of those it perceives to be linked to the government. In August, Al-Shabaab carried out an attack on Hotel Hayat in Mogadishu, killing at least 30 people and injuring more than 50 others.

Of 428 civilian casualties reported by the UN in Somalia between February and May this year, 76 percent are believed to be the result of indiscriminate attacks by Al-Shabaab.

Saturday’s attack came five years after another bombing in the same location, which killed almost 600 people and injured more than 300 others in what is believed to be Africa’s deadliest truck bombing. Although widely assumed to have been carried out by Al-Shabaab, the group has not claimed responsibility for it.

Since 2011, Al-Shabaab has increasingly targeted locations frequented by civilians, including hotels and restaurants, for attacks that have killed and injured thousands of civilians.