Home International Africa The trouble with Sudan; is this the end of the road for... 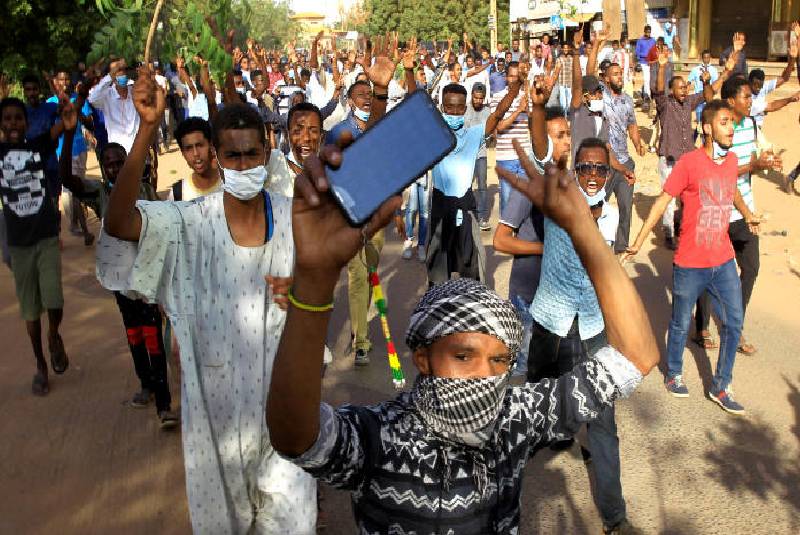 Omar Al Bashir, President of the Sudan for close to 30 years is perhaps facing one of the toughest times of his three decade reign, all in the name of bread.

For a man who has survived civil wars that led to annexation of part of his country, a crippling inflation and a people’s uprising might finally push him out of the seat he has ruled over with an iron fist, sometimes cushioned in velvet gloves.

For close to three weeks, protests have rocked Sudan’s capital Khartoum and other towns previously thought as strongholds of the 75-year-old Bashir.

Officially, at least 19 people have been killed since the demonstrations began in mid-December against sharp commodity price increases, but rights’ group Amnesty International puts the death toll at 37.

Sensing the public outrage against him, Bashir and those around him have been on a charm offensive to try and reign in the protests. On Thursday, the government announced an increase in civil servants’ salaries.

On Thursday, President Bashir marked the country’s independence anniversary with a speech highlighting his government’s achievements – despite the continued protests in many towns and cities. Addressing workers’ unions, he blamed the economic crisis on the loss of oil revenue since the 2011 secession of South Sudan, which he said had been worsened by the impact of US economic sanctions that ended in 2017. The Opposition, demanding that President Bashir steps down after three decades in power, called for another wave of mass protests to take place on Friday.

“He is under a lot of pressure from both within and outside the country. He is willing to go above and beyond to stay in power,” Elzahraa Jadallah a Khartoum-based journalist told the Saturday Standard.

Khartoum has always guarded the information that percolates to the rest of the world. The protests organised by the Sudanese Professional Association, although massive and in multiple locations within the country of 40 million people have hardly been reported on.

Images of major government buildings being set on fire to compel Bashir to step down have not trended on news websites. In a country where the State tightly controls traditional media, it was thought the internet would become a key information battleground.

Sudanese media has previously reported that 13 million people of the country’s 40 million population use the internet and more than 28 million own mobile phones.  However, news agency Reuters says users of the three main telecommunications operators in the country — Zain, MTN and Sudani — said access to Facebook, Twitter and WhatsApp has only been possible through use of a virtual private network (VPN).

“There was a discussion in the government about blocking social media sites and in the end it was decided to block them,” head of Sudan’s National Intelligence and Security Service, Salah Abdallah, told a news conference on December 21.

Harry Verhoeven, author of Water, Civilisation and Power in Sudan, told Bloomberg that Sudan’s political crisis had its roots in the exclusionary style of government and the economic quagmire that it has created.“Having run out of political legitimacy and with no more money to spend, the only instrument of survival the Bashir regime can fall back on is heavy-handed repression,” Verhoeven said.

Heavy handedness is a familiar tactic in Sudan. In 2013, countrywide protests over a reduction in fuel subsidies were violently crushed with close to 200 people dying.

This time though, the protests are not centralised in Khartoum and are in other rural provinces, including Bashir’s home State of Hosh Bannaga and have far more support than the 2013 protests.

In fact, sentiments for refreshed leadership in Sudan can be traced back to the birth of South Sudan and the debilitating effects the secession of Juba had on Khartoum.

“The real problem of the Sudan which led to the separation of the south and conflicts in other regions is failure of the central authority, for many years, to manage diversity of the country on fair and equitable bases, besides external interventions,” Sudanese scholar Hamed Omer Hawi wrote in his paper Post-Referendum Sudan: National and Regional Questions.

“The government could not read the plain words on the wall that something drastic is going to happen unless the centre changes its attitude towards the marginalised regions.”Yet, Khartoum opts to look the other way and ignore current realities.

“His speeches and statements are not reflective of the actual realities. People blame him for the economic sanctions and the ruin of State corporations as a result of privatisation,” Elzahraa says.

Recent history cannot be far from Bashir’s mind. He has seen similar uprisings spark into wild flames in neighbouring countries, sweeping off regimes in large parts of North Africa. But he will also take courage from the fact that some of his contemporaries have weathered the storm and emerged largely unscathed. Burundi and the Democratic Republic of Congo would serve as examples of this.

But at 75, he will surely be aware that even the most trusted of his lieutenants are starting to think of a Sudan without him.

And this should be top of his list of worries. He might have what it takes to quell external pressure, but does he still have the power to stand up to betrayal from within?“It is hard to say whether the protests will bring him down,” Elzahraa says. “But this is the most significant and most widespread protest against him since he took power.”

Citizens, the Sudanese Professional Association and political parties formerly allied to the regime have pulled out of government and are now part of the protests. All demand one thing; the ouster of Bashir and the formation of a transitional government.