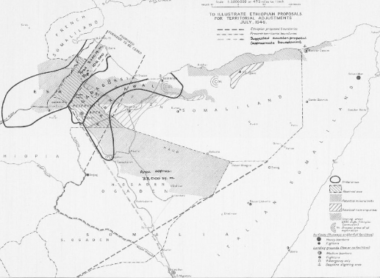 In 1946, Ethiopia proposed to the British colonial office that it grant it access to the sea through Somaliland territory all the way to the port of Zeila.

Following up on earlier proposals on the same purpose which kept circulating to and from between the colonial office, the foreign office and the office of the Prime Minister in the ’30s, Ethiopia formulated a plan that merited a more serious consideration of the British.

Of course, and unbeknown to the local Somaliland clans, this was the second, under-handed violation to the tenets and spirit of the ‘Protectorate’ treaties the British entered with Somali clans which allowed them to set foot on Somaliland territory.

Ethiopia, for an exchange of part of the Haud north and northeast of the Webi Shabelle, wanted Great Britain to grant it a 100-mile wide corridor connecting mainland Ethiopia to the to the sea aiming to annex Zeila as a major Red Sea outlet for the landlocked Abyssinian Kingdom.

A memorandum, jointly submitted to the British Cabinet on 6 August 1946, by the Secretary of State for Foreign Affairs, Ernest Bevin, and the Secretary of State for the Colonies, George Henry Hall (1945-46), advised that the Ethiopian proposal be seriously considered to (a) keep Anglo-Ethiopian relations intact if not stronger; and (b) to return some grazing land to Somaliland clans which will lead to the realization of a ‘United Somalia’

“In the event, it will be remembered that his Majesty’s Government decide not to proceed with the United Somalia project at this stage, but considered that it should not be abandoned altogether…They (Ethiopians) have now come forward with the proposal that iof a corridor to the sea, to the port of Zeila in British Somaliland, could be given to Ethiopia, they would, in return, be prepared to cede to British Somaliland part of the Ogaden in exchange,” the memorandum underlined.

The British, however, noted that the width of the corridor which the Ethiopians proposed was much wider than the need projected. In exchange for a narrower area, the British were prepared to accept a lesser area of the Ogaden than Ethiopia wished to offer.

It concluded that: (a) The Ethiopian offer should be followed up without delay, and (b) that negotiations should be opened on the thesis of a more limited exchange of territory, but that…negotiators be given some latitude to make adjustments in the light of Ethiopian reactions to our opening offer.

The two Secretaries, specifically, proposed that the Ethiopian Corridor be limited to the road leading from Ethiopia to Zeila, covering Essa land, on the one hand, and the land to be ceded to the British by Ethiopia be a trip of the Haud as opposed to the larger area which covered the Ogaden Reserve area, too.

Somalis were not in the equation. It was what the British wanted, and what the Ethiopians proposed and how the reactions of the French lording over French Somaliland (Djibouti) could be once an adjacent area to that of their responsibility was taken over by Ethiopia, replacing Britain as its neighbour.

Prime Minister Abiy Ahmed, with a Somalia, history-dull leader in tow, is reviving the Abyssinian ambition.

Confidential reports have indicated that, in the guise of a proposed African Security taskforce whose mandate partly covers the Red Sea, asked President Farmajo of Somalia to give him Zeila. Abiy had a dual purpose: to effect a corridor to the sea which his predecessors could not bring through; and to build a strong naval base at Zeila ahead of the United Kingdom and Russia who had made similar intentions for the Somaliland port known.

Farmajo jumped at the idea, the reports indicate. He saw in the Abiy proposal a second and a third term in Somalia’s Villa Somalia office if the PM could – by guile, might or coercion bring Somaliland back to his fold in another, much worse, Somalia-dominated union.

And, of course, again, people who owned the land, Somalilanders, were not in the equation.

The day – as luck and the determination of a hardened people may have it – was saved by the Somaliland public who declared they would rather take up arms again en masse than be shepherded back to a union that had already wasted 60 years of their time. The situation encouraged the President, his government, political party leaders, and the Houses Speakers of the bicameral parliament to take a bold stand and reject the seemingly unprofessional, undiplomatic blitz machinations of the young Ethiopian PM and his friend at Villa Somalia.

Partly realizing its folly – or shelving its ambitions for another opportune moment – Addis Ababa hurried to mend fences with Hargeisa sending a key, well-respected Minister to touch base with President Bihi and his government reassuring them of a non-repetition of a miscalculated misstep.

Britain, according to the reports, also woke up to the ramifications of the Farmajo-Abiy (derisively called on the streets as Abiy-hii –his father) waltz, doing some behind-the-scenes pulling a number of strings.

If that is true, the UK still owes Somaliland. May 1897 was the first, major violation to the treaties with Somaliland. It gave Ethiopia to carve much of the Somali territory into its own.

There is no time like the present for Britain to tell the world that the giant has woken from its slumber. Somaliland can be the ringtone it is looking for.

At this stage, there is no time like the present, too, for the Republic of Somaliland to hammer political and diplomatic nails home due to the opportunities laying themselves bare for it to grab.

The time for a negotiated diplomatic recognition is here but it remains to be seen whether the incumbent government can take full advantage of. 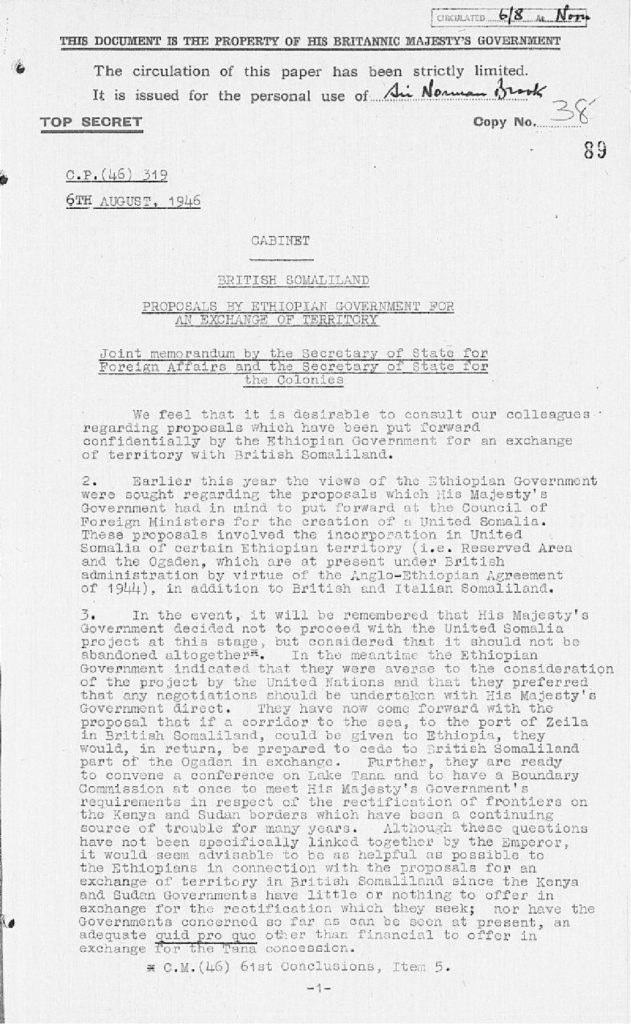 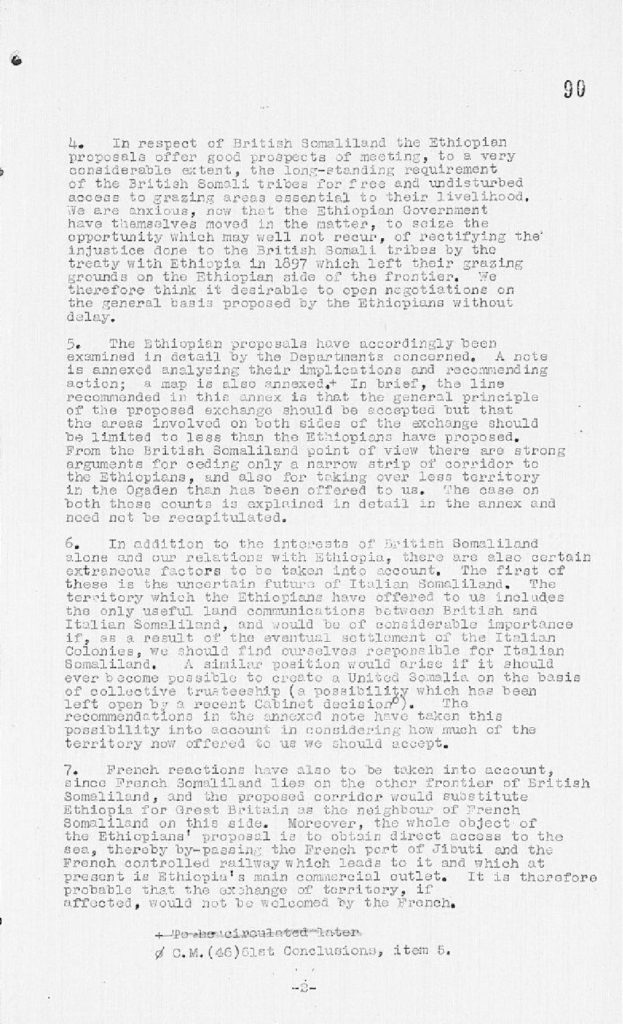 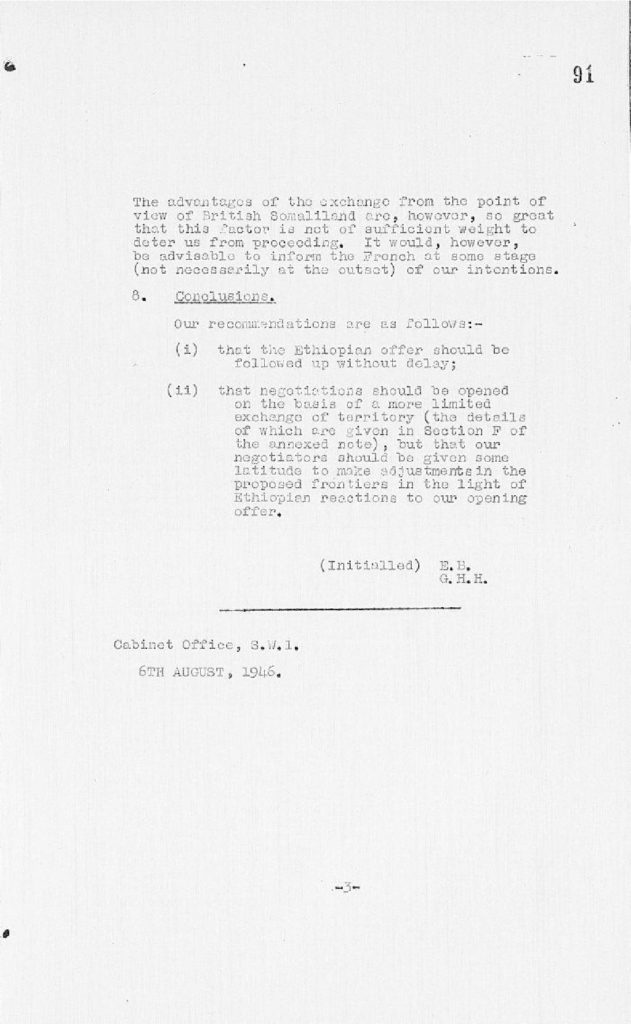 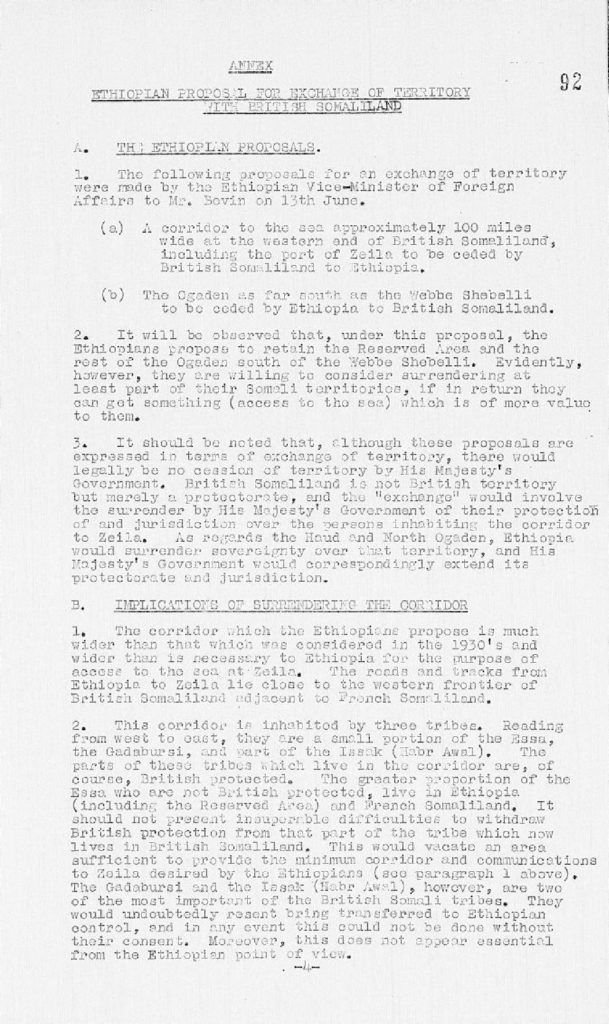 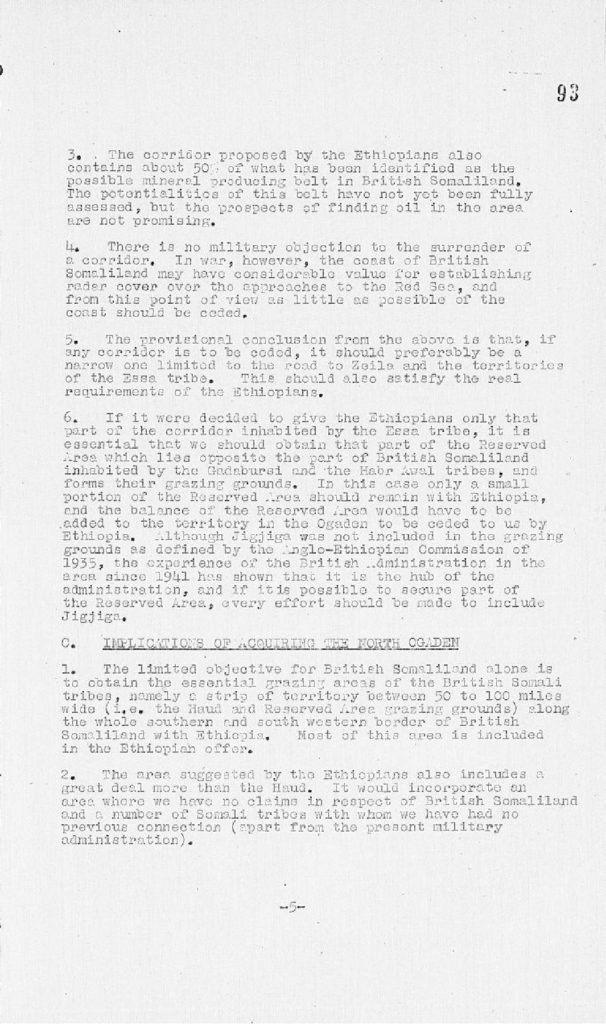 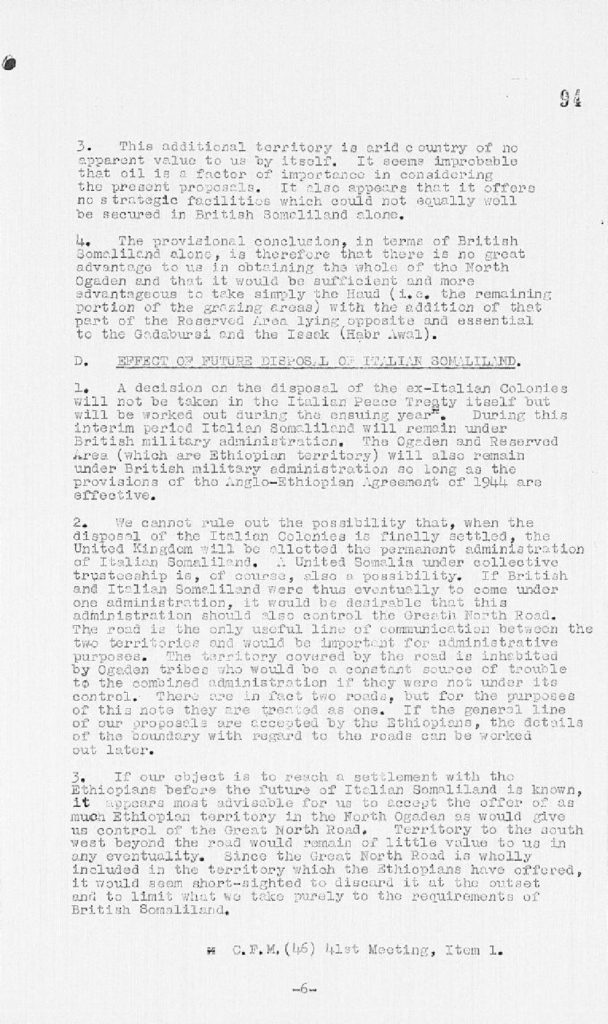 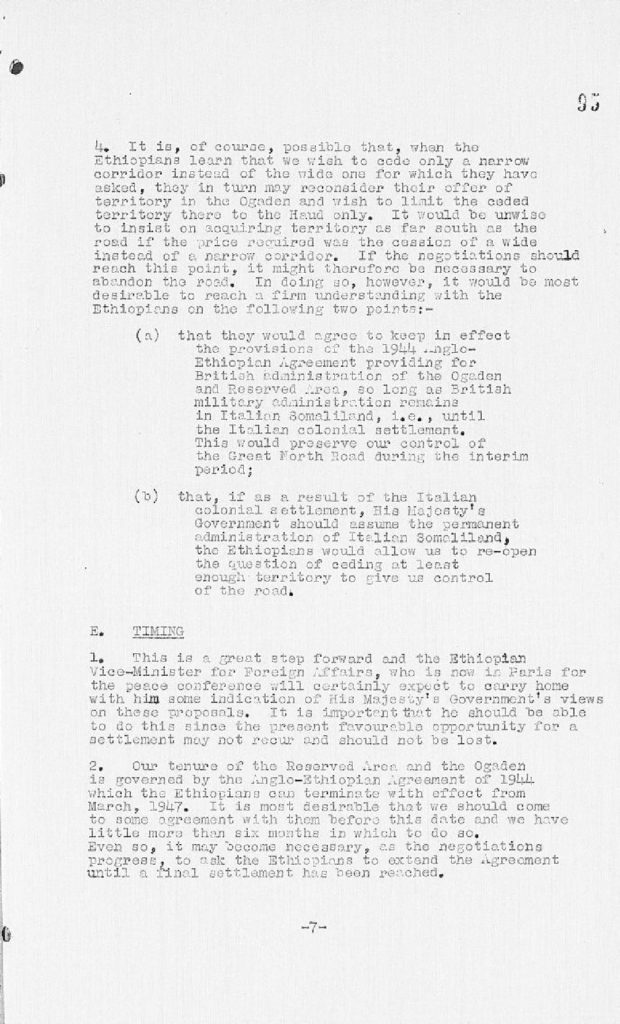 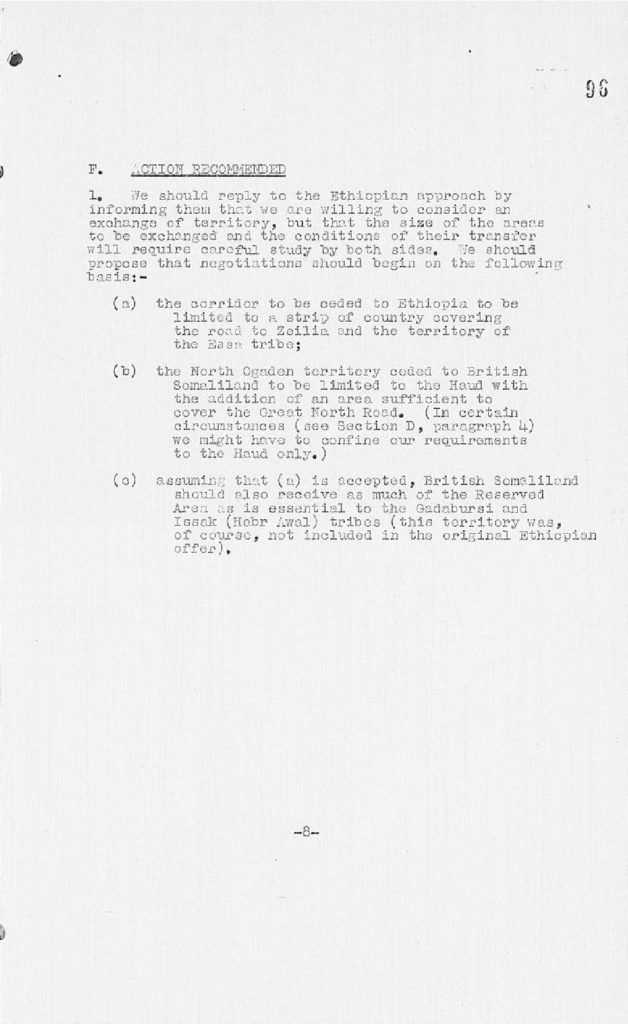 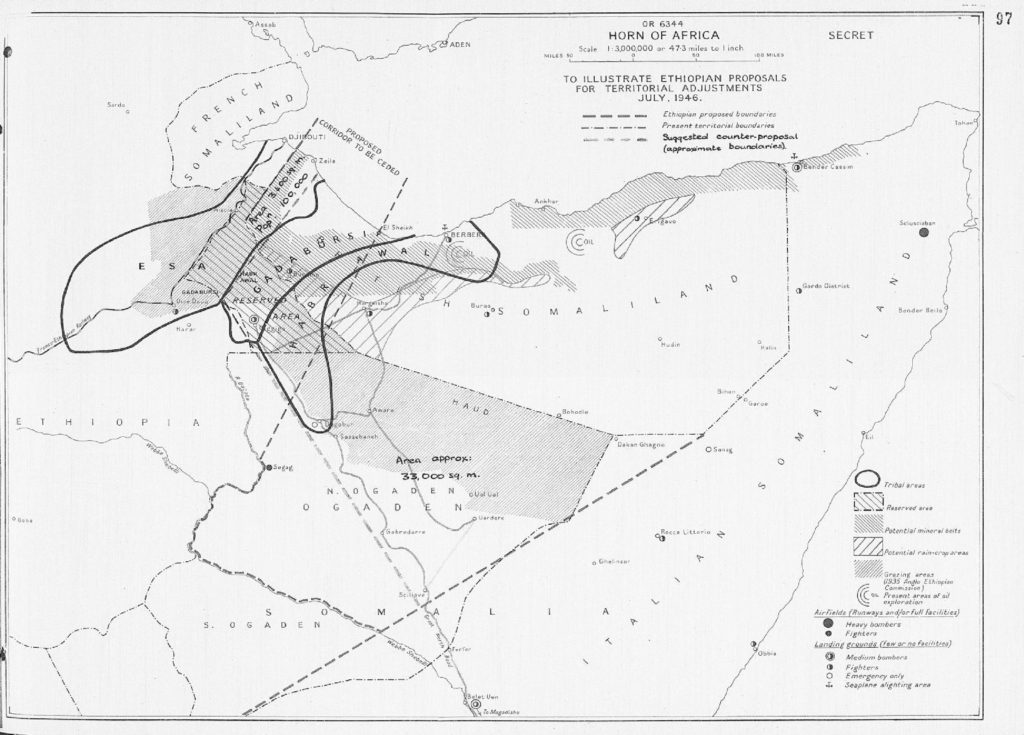