SomTribune
Home Somaliland Somaliland must put the world to task based on the Montevideo Convention...

Professor Ahmed Ismail Samatar speaking to Somaliland Diaspora communities in London on Eid el Fitr advised the government of Somaliland, international lobbyists for Somaliland diplomatic recognition, active members of the Somaliland academia and Diaspora members to hold the world to task on its insouciant – quite often ignorant and/or belligerent – attitude towards Somaliland’s  inalienable right to self-determination.

The Professor led his captivated audience on a very detailed step-by-step journey of Somaliland History. He spoke of the Anglo-French Treaty, for example, of 1888, the Anglo-Italian Protocol of 1894 and the Anglo-Ethiopian Treaty of 1897.

The Professor’s aim was to highlight Somaliland’s right to statehood as it was an  internationally recognized statehood in 1960 before some political leaders mesmerized by a would-to-be Greater Somalia hijacked it to Mogadishu – and a 40-year long second citizenship for Somalilanders.

Professor Samatar cited the conference on which American States’ rights and claims to statehood is largely based on. 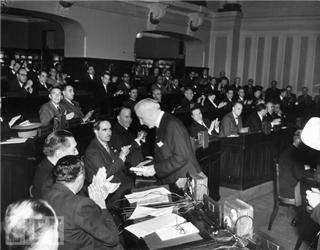 The Professor was, of course referring to the Montevideo Convention on the rights and duties of States (above) at the end of which 16 articles were agreed upon and signed (see copy below).

The treaty, according to the official page of the American Council for Foreign Relations (CFR), was signed at the International Conference of American States in Montevideo, Uruguay on December 26, 1933. It entered into force on December 26, 1934. The treaty discusses the definition and rights of statehood.

The outcome of that conference is one of the most respected instruments used as yardsticks for new states.

Article 1, alone, stands a steadfast witness, testifying to a dereliction of obligations on the part of an international community that would rather bear the shame of hypocrisy and double standards than step forward and defend its afore-concluded principles and instruments to serve humanity and prevent oppression, social strife and human rights abuses on a mass scale.

CONVENTION ON RIGHTS AND DUTIES OF STATES

The Governments represented in the Seventh International Conference of American States:

Wishing to conclude a Convention on Rights and Duties of States, have appointed the following Plenipotentiaries:

Who, after having exhibited their Full Powers, which were found to be in good and due order, have agreed upon the following:

The state as a person of international law should possess the following qualifications: a ) a permanent population; b ) a defined territory; c ) government; and d) capacity to enter into relations with the other states.

The federal state shall constitute a sole person in the eyes of international law.

The political existence of the state is independent of recognition by the other states. Even before recognition the state has the right to defend its integrity and independence, to provide for its conservation and prosperity, and consequently to organize itself as it sees fit, to legislate upon its interests, administer its services, and to define the jurisdiction and competence of its courts.

States are juridically equal, enjoy the same rights, and have equal capacity in their exercise. The rights of each one do not depend upon the power which it possesses to assure its exercise, but upon the simple fact of its existence as a person under international law.

The fundamental rights of states are not susceptible of being affected in any manner whatsoever.

The recognition of a state merely signifies that the state which recognizes it accepts the personality of the other with all the rights and duties determined by international law. Recognition is unconditional and irrevocable.

The recognition of a state may be express or tacit. The latter results from any act which implies the intention of recognizing the new state.

No state has the right to intervene in the internal or external affairs of another.

The jurisdiction of states within the limits of national territory applies to all the inhabitants.

Nationals and foreigners are under the same protection of the law and the national authorities and the foreigners may not claim rights other or more extensive than those of the nationals.

The primary interest of states is the conservation of peace. Differences of any nature which arise between them should be settled by recognized pacific methods.

The contracting states definitely establish as the rule of their conduct the precise obligation not to recognize territorial acquisitions or special advantages which have been obtained by force whether this consists in the employment of arms, in threatening diplomatic representations, or in any other effective coercive measure. The territory of a state is inviolable and may not be the object of military occupation nor of other measures of force imposed by another state directly or indirectly or for any motive whatever even temporarily.

The present Convention shall not affect obligations previously entered into by the High Contracting Parties by virtue of international agreements.

The present Convention will enter into force between the High Contracting Parties in the order in which they deposit their respective ratifications.

The present Convention shall remain in force indefinitely but may be denounced by means of one year’s notice given to the Pan American Union, which shall transmit it to the other signatory governments. After the expiration of this period the Convention shall cease in its effects as regards the party which denounces but shall remain in effect for the remaining High Contracting Parties.

The present Convention shall be open for the adherence and accession of the States which are not signatories. The corresponding instruments shall be deposited in the archives of the Pan American Union which shall communicate them to the other High Contracting Parties.

In witness whereof, the following Plenipotentiaries have signed this Convention in Spanish, English, Portuguese and French and hereunto affix their respective seals in the city of Montevideo, Republic of Uruguay, this 26th day of December, 1933.

The Delegation of the United States of America, in signing the Convention on the Rights and Duties of States, does so with the express reservation presented to the Plenary Session of the Conference on December 22, 1933, which reservation reads as follows:

“The policy and attitude of the United States Government toward every important phase of international relationships in this hemisphere could scarcely be made more clear and definite than they have been made by both word and action especially since March 4. I [Secretary of State Cordell Hull, chairman of U.S. delegation] have no disposition therefore to indulge in any repetition or rehearsal of these acts and utterances and shall not do so. Every observing person must by this time thoroughly understand that under the Roosevelt Administration the United States Government is as much opposed as any other government to interference with the freedom, the sovereignty, or other internal affairs or processes of the governments of other nations.

“In addition to numerous acts and utterances in connection with the carrying out of these doctrines and policies, President Roosevelt, during recent weeks, gave out a public statement expressing his disposition to open negotiations with the Cuban Government for the purpose of dealing with the treaty which has existed since 1903. I feel safe in undertaking to say that under our support of the general principle of non-intervention as has been suggested, no government need fear any intervention on the part of the United States under the Roosevelt Administration. I think it unfortunate that during the brief period of this Conference there is apparently not time within which to prepare interpretations and definitions of these fundamental terms that are embraced in the report. Such definitions and interpretations would enable every government to proceed in a uniform way without any difference of opinion or of interpretations. I hope that at the earliest possible date such very important work will be done. In the meantime in case of differences of interpretations and also until they (the proposed doctrines and principles) can be worked out and codified for the common use of every government, I desire to say that the United States Government in all of its international associations and relationships and conduct will follow scrupulously the doctrines and policies which it has pursued since March 4 which are embodied in the different addresses of President Roosevelt since that time and in the recent peace address of myself on the 15th day of December before this Conference and in the law of nations as generally recognized and accepted”.

The delegates of Brazil and Peru recorded the following private vote with regard to article 11: “That they accept the doctrine in principle but that they do not consider it codifiable because there are some countries which have not yet signed the Anti-War Pact of Rio de Janeiro 4 of which this doctrine is a part and therefore it does not yet constitute positive international law suitable for codification”.

Peru:
(with the reservation set forth)
ALFREDO SOLF Y MURO