There were no missteps this time — no falls, no stumbles, no alarming moments of insecurity. Mo Farah of Britain, who had tripped on the Olympic track twice in the past week, won the 5,000 meters on Saturday night with a sure-footed show of confidence, cunning and blistering late speed.

It was a vintage, imperial performance by Farah, 33. Starting the race at the rear of the group, he picked off his competitors, one by one, over the course of 12½ laps and surged across the finish line, well clear of the pack, in 13 minutes 3.30 seconds. 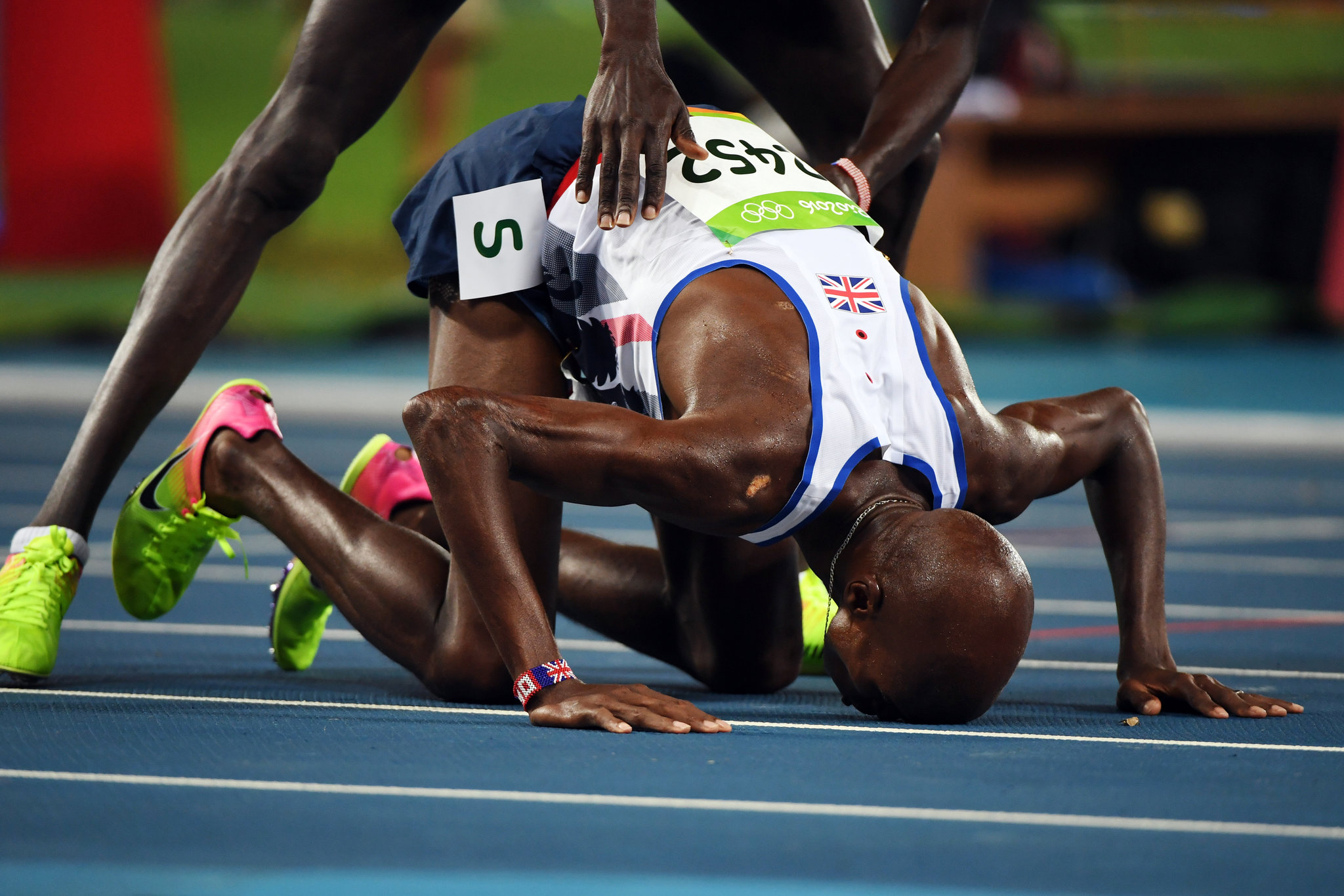 The win put him in impressive company: He became the first man in 40 years to win gold medals in the 5,000- and 10,000-meter races in two separate Olympic Games.

“It means so much to me, and I can’t believe I did it,” Farah said. “Mentally I had to be on top of my game. The guys were out there to get me. I just had to be alert.”

Paul Chelimo of the United States won the silver — after some confusion. After finishing behind Farah in 13:03:90 with a thrilling late push, Chelimo was informed during a postrace interview on NBC that he had been disqualified for a lane infringement and that Hagos Gebrhiwet of Ethiopia would move up to take the silver and Bernard Lagat of the United States would win the bronze.

However, Chelimo was later reinstated, with officials saying he had not broken any rules. Gebrhiwet, who finished in 13:04:35, was awarded the bronze. Mohammed Ahmed of Canada was also reinstated, to finish fourth, and Lagat was bumped from third to fifth place. 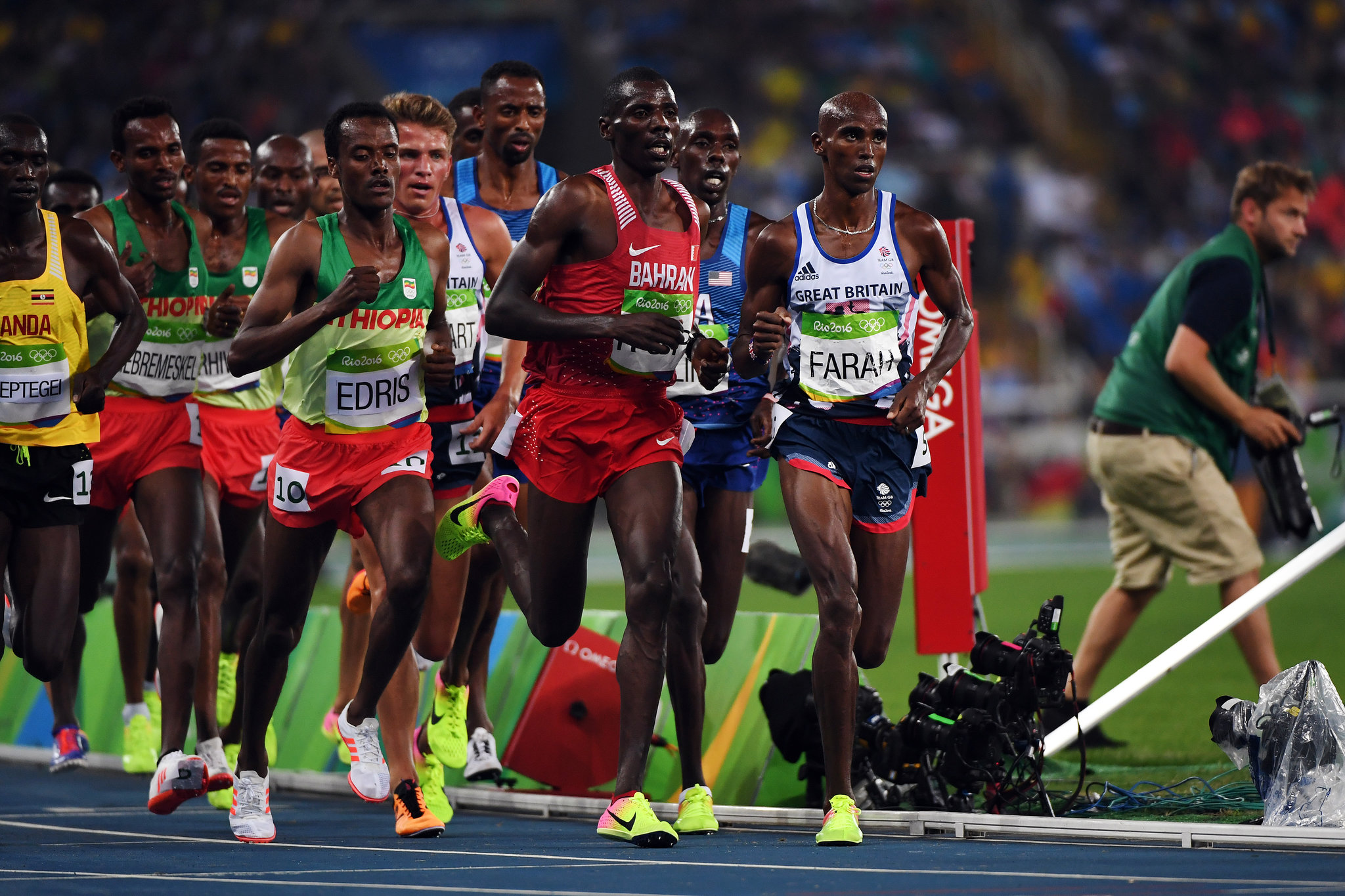 James Hill for The New York Times Chelimo’s silver was the first medal for the United States in the event since the 1964 Tokyo Games.

Farah, who won gold in the 5,000 and the 10,000 at the 2012 Games in London, had performed as well as expected in Rio de Janeiro heading into Saturday night, but he had to endure some nervous moments in his earlier races.

Running in the 10,000 a week ago, Farah stumbled toward the track after becoming tangled with Galen Rupp of the United States, his friend and training partner, on the 10th lap of the race. Nevertheless, he finished in 27:05.17 to win the third gold medal of his career.

On Wednesday, in his 5,000-meter heat, Farah tripped again when he collided with Hassan Mead of the United States with about 150 meters to go. Farah regained his balance and finished in third to qualify for the final. 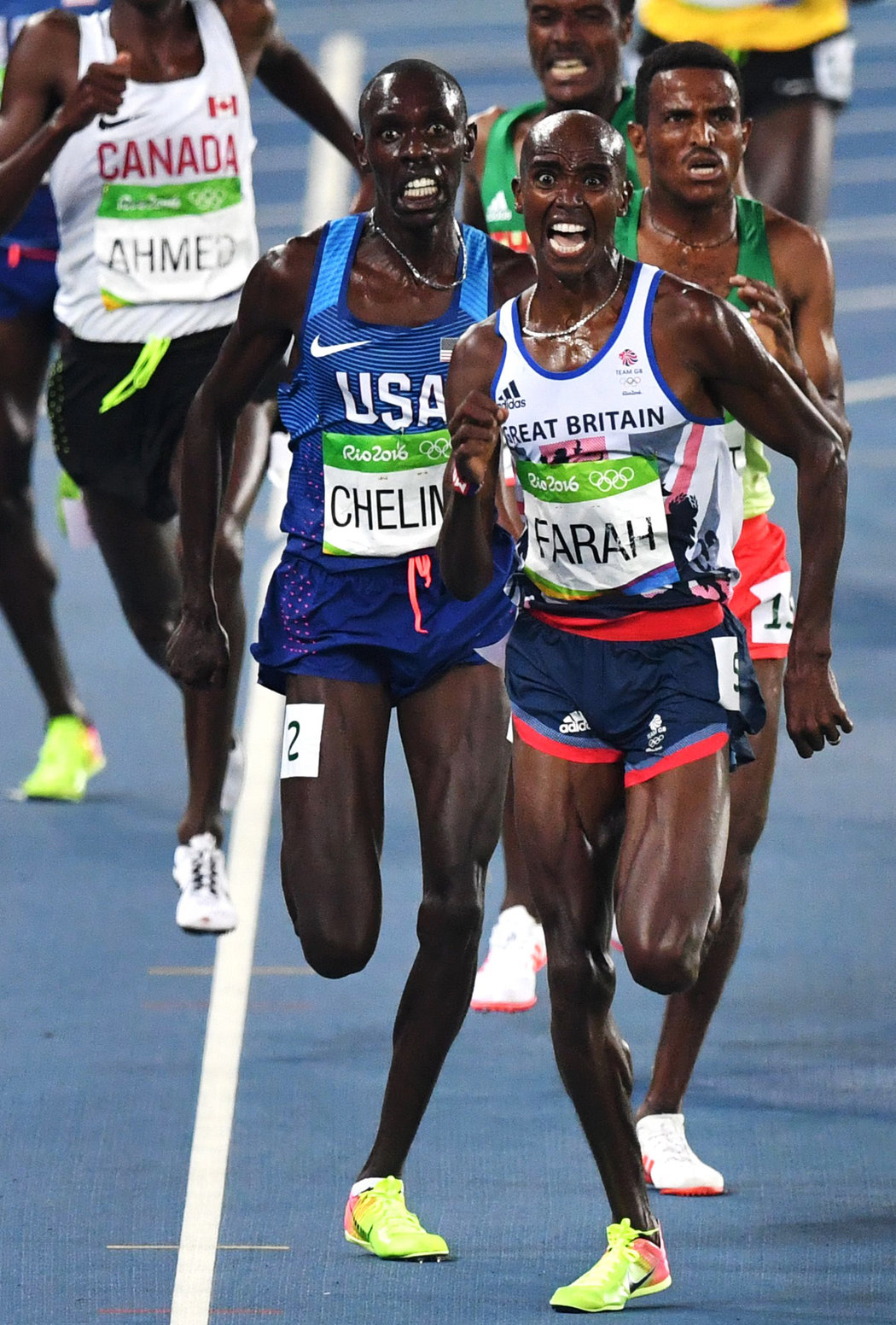 On Saturday night, there was no such awkwardness. Farah slunk to the back of the pack at the beginning of the race and began gradually working his way up after one lap.

After four laps, he was cruising in the middle of the pack. About 3,000 meters into the race, Farah crept all the way to the head of the group, and he fought off every challenger the rest of the way.

“Once I got going, I went to the front. I was like, ‘I know these guys are thinking about me, so I’m going to control this.’ and I controlled it,”Farah said. “I wasn’t going to let anyone pass me.

Farah, who is known for his long strides and late sprinting ability, ran his final lap in 52.83 seconds. He crossed the finish line with his arms spread wide, and soon after he dropped to his knees to kiss the track. 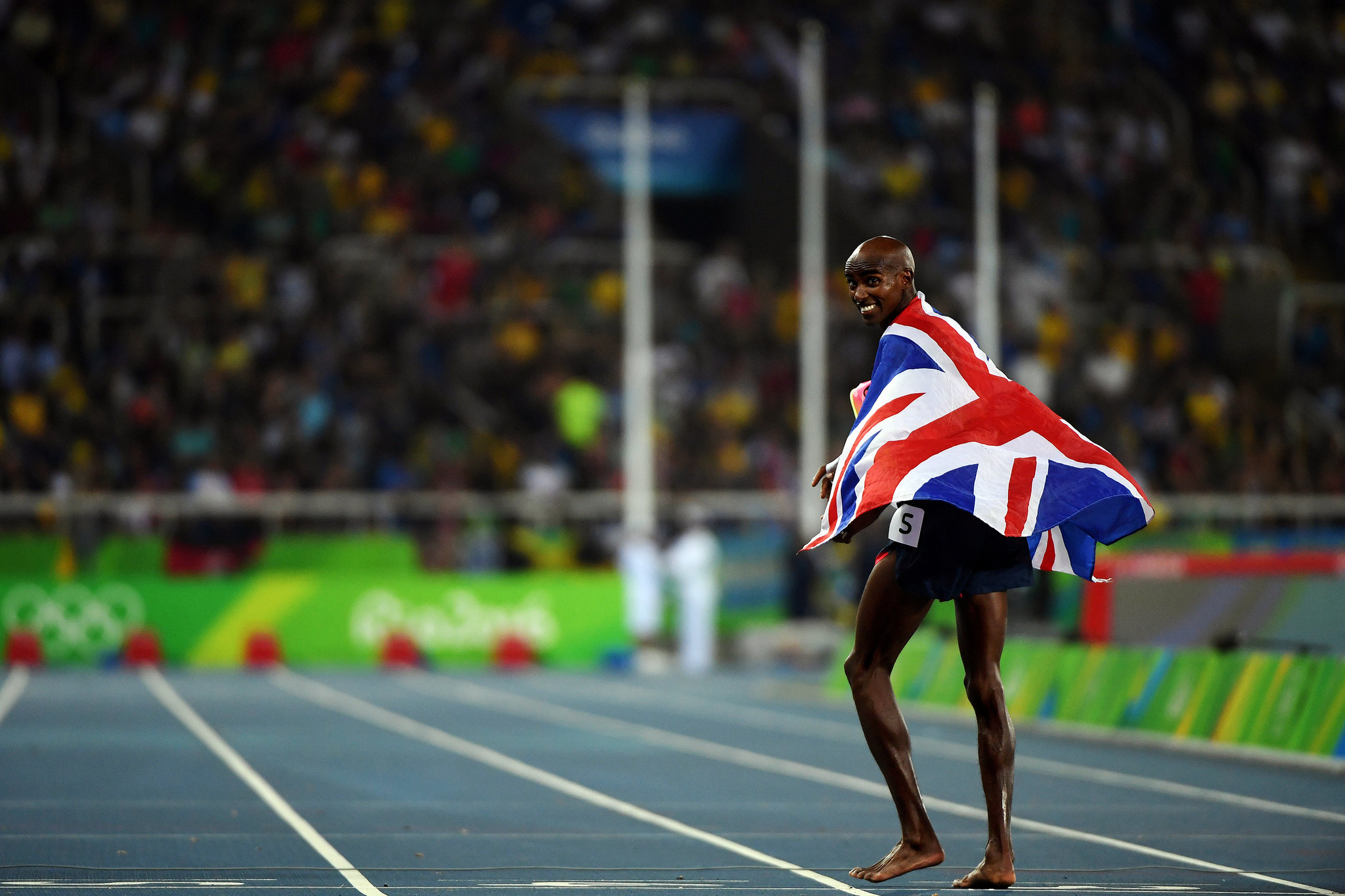 Farah is coached by Alberto Salazar, who runs the prominent Nike Oregon Project. Salazar is under investigation by the United States Anti-Doping Agency. He and his athletes have emphatically denied any ties to performance-enhancing drugs.

After the race, Chelimo seemed perturbed that the news of his initial disqualification was delivered to him on live television. “That was the most heartbreaking thing in my life,” he said. “I don’t know why they did that. They should have told me what was happening.”

He had to wait 20 minutes before he knew he was reinstated, which he called “the longest wait of my life.”

The gold medal winner never seemed in doubt. Farah, who moved from Somalia to Britain when he was 8, has been invincible in the last five years. He has lost only one 5,000-meter race since 2011, when he moved to Oregon to work with Coach Alberto Salazar: the 2013 Prefontaine Classic in Eugene, Ore., which he ran while battling a stomach virus.

It has been reasonable to wonder, given Farah’s age, if his form might begin to show some decline. But there was no sign of that on Saturday.