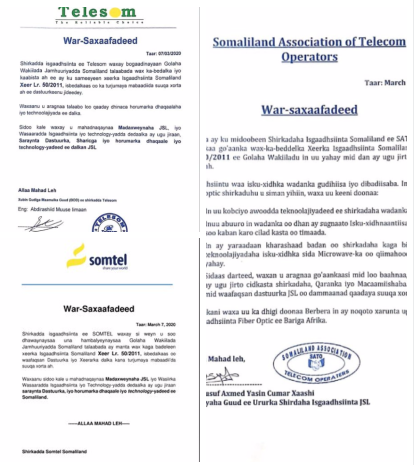 The House of the Representatives of the Republic of Somaliland, Saturday, took off all fetters from the free provision of Internet Fibre optic services in the market.

Law No. 50/2011 has, since that year, closed the market in honour of a 25-year concession it gave to a relative newcomer to the telecommunication market, Somcable, a firm whose core competence lay in the provision of a fibre optic Internet subleased from the Djibouti Communications network.

His Excellency the President, Musa Bihi Abdi, proposed an amendment to that law, passed by the same sitting parliament on a majority vote as it did today, which a brief deliberation, the House ratified.

Both Somaliland telecom giants, Telesom and Somtel, tried time and again to break the tethers from what they saw as an unfair monopoly which put at the mercy of a less experienced competitor.

In September 2016, Telesom signed an agreement with OmanTel, the Omani national telecom operator and a leading wholesale carrier in the Middle East, in partnership with Ethio telecom and Gollis to lay a submarine fibre optic cable. The cable, to be built by Xtera Communications Inc. – an optical transport solutions company – was planned to originate from Salalah in Oman to Bosaso in Puntland and Berbera in Somaliland, with a terrestrial extension to Addis Ababa in Ethiopia.

The then government of Somaliland blocked the initiative.

In October 2018, Somtel entered a partnership agreement with Djibouti’s Telecom on its Djibouti Africa Regional Express 1(DARE1) cable. The high-speed cable aimed to boost internet services in the region all the way to Mombasa, Kenya.

TE SubCom, a main supplier and an industry pioneer in undersea communications technology and marine services, won the contract to lay the submarine cable and build on land relay stations along its path in Somaliland, Somalia’s Bossasso and Mogadishu, and at Mombasa of Kenya.

Again, the government of Somaliland turned away a ship laying the cable as recently as 22nd January 2020 – a wake-up action which, perhaps, decided the turnabout in government standpoint on the issue.

The approval of the amended copy of the law, according to observers, is a reiteration of Somaliland’s constitutional viewpoint on free trade and free markets as it is a blow for cheaper, more competitive high-speed Internet services.

Both Somtel and Telesom warmly welcomed the government’s change of heart calling it a positive blow struck for private sector development fostering free markets in a crucial sector.

Sato, the Somaliland Association of Telecom Operators, pointed out that the move did not only provide subscribers with a wider choice but it also scaled the huge costs the providers incurred in maintaining a credible service in a difficult environment.

It is not clear, yet, if all three providers – Somcable, Somtel, Telesom – would stay with their old agreements or look for more ways to stay ahead of the pack.

Market observers have predicted thar a change of government appriach to dealing with telecim-related challenges will transpire if the relecom giants played their cards right. Apparently, they did.

The government, they now say, would be a visible partner in the new ventures to, if nothing else, use its clout to effect inter-connectivity ti say nothing of the revenue in taxation and hefty profit returns. 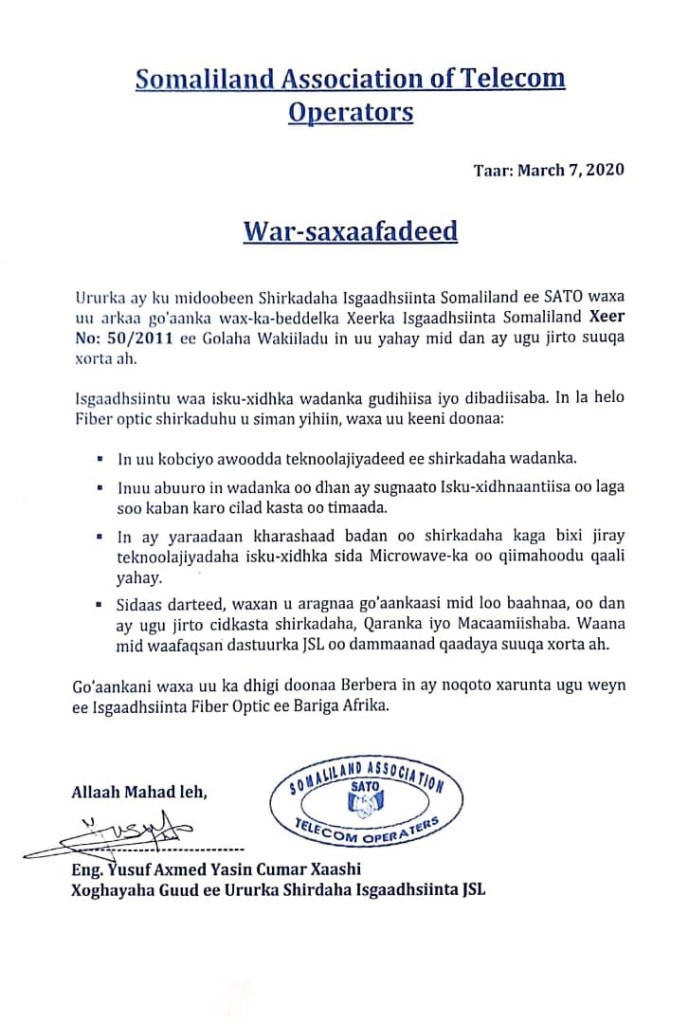