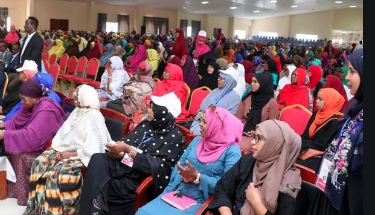 Women in Somaliland say they are determined to contest in the parliamentary elections due to be held in May 2021, despite a refusal by the parliament to set aside a quota for women.

MPs dismissed on 27 September a cabinet recommendation to support the women’s quota, which would have made it possible for at least 18 women to overcome the huge social and political hurdles towards getting elected.

Nafiso Yusuf Mohamed, the head of Negaad, an umbrella group for women’s organisations in Somaliland, described this as an unexpected setback for women ambitious to bring positive change in their society.

“The traditional elders and the religious authorities have been impeding our efforts. The elders only want men, not women, to represent their communities,” she said.

“However, after standing our ground, we have won over some elders who were prepared to put forward women representatives.”

Currently, there is only one female MP in the 163-member parliament.

“We are fighting to have more women in parliament to push our interests forward because men don’t care about the issues that concern us. We have been holding forums for women to sensitize them and encourage them to run for office,” said Nafiso.

The Somaliland Minister for the Environment, Shukri Haji Ismail Bandere, told Radio Ergo that she had spent 10 years lobbying for the women’s quota. The claim that applying the quota would require a constitutional amendment was not convincing.

“Women were not involved in drafting the constitution in the first place,” she said. She cited the clan-sharing formula, and renewal of the period for the house of elders, as examples of changes that were implemented without reference in the constitution.

Luul Hassan Mataan plans to run in the next parliamentary elections, believing that many social ills, including violence against women and children, would be addressed if there were more women representatives.

“There has been a rise in rape cases and other transgressions against women and minors. If we had only 20 women in parliament, I’m sure the rights of all vulnerable groups would have been upheld. The MPs, who are men, don’t care much about social issues so there are no laws passed in that regard,” she argued.

Luul said she was even more determined to make her bid now and would be appealing directly to voters, especially women, to unite behind female candidates.

“As women intellectuals and as candidates, we have made the firm decision to push on and compete with men, come what may,” Luul declared.