SomTribune
Home World News/International Politics/Diplomacy Donald Trump Is Back. Democrats Should Be Sweating 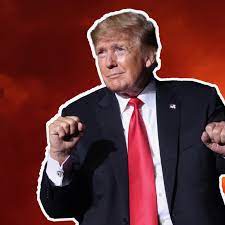 Former President Donald Trump has repeatedly hinted that he may run for president again in 2024 and a recent rally in Iowa has fueled further speculation about his intentions.

Iowa is a key state in the early stages of a presidential race as it is the first in the nation to indicate a preference for the Oval Office. A poll from The Des Moines Registerreleased before Trump’s rally on Saturday, October 9 showed that 53 percent of Iowans approved of him.

There have also been other potentially positive factors for Trump. Two leading bookmakers, BetOnline and Betfred, placed him as the favorite to win the 2024 presidential election on Tuesday. This was the first time he had been in this position since before the election in November 2020.

Trump enjoyed 47 percent compared to Biden’s 46 percent, though his lead was within the poll’s 2.7 percent margin of error.

A potential political comeback for Trump cannot be ruled out at this point and Democrats facing difficult midterm elections in 2022 may be concerned at both Trump’s influence over the Republican Party and his chances in 2024.

Biden has seen a difficult start to his presidency. Now approaching his ninth month in office, the president’s approval rating has declined significantly since taking office on January 20.

Poll tracker FiveThirtyEight, which tracks Biden’s popularity based on analysis of a wide range of polls and its own system of pollster ratings, gave Biden an approval rating of 44.5 percent as of October 13. Disapproval of the president stood at 49.2 percent.

The president’s approval rating has been on a downward trajectory since August 30—the day before the final deadline for the withdrawal of U.S. troops from Afghanistan.

Since then, Biden’s agenda has stalled in Congress and divisions within the Democratic Party have held up the passage of a $1.2 trillion bipartisan infrastructure bill and fierce debate continues about a separate $3.5 trillion social spending bill, called the Build Back Better Act.

All of these issues could be good news for a Trump reelection bid, but experts who spoke to Newsweek made it clear that the former president is not guaranteed to be successful.

“On the Republican side, one could make the case that hardline MAGA supporters have grown even more resolute about putting their man back in office since last year. For some elements of the base, January 6, a never-ending vortex of conspiracy theories, and continued claims of election rigging have only amped up the rage many felt when Biden was inaugurated.

“On the Democratic side, a current administration that seems increasingly rudderless on both domestic and foreign policy can only help Trump’s chances of staging a comeback,” Gift said.

“Over the last year, Americans have witnessed a botched withdrawal of troops from Afghanistan, a crisis at the U.S.-Mexico border that’s worsened, and a signature infrastructure proposal that remains in limbo—despite Democrats controlling both chambers of Congress.

“Rightly or wrongly, the perception that the Democratic Party is increasingly subject to the whims of far-left progressives—focused more on pressing a ‘woke’ agenda than addressing bread-and-butter concerns of working-class voters—could be yet another boon to Trump’s 2024 aspirations,” he said.

The Center of Attention

Mark Shanahan is an associate professor at the Department of Politics and International Relations at Reading University and co-editor of The Trump Presidency: From Campaign Trail to World Stage. He told Newsweek that the former president was a “risk” to Biden.

“Donald Trump always wants to be the center of attention and Joe Biden‘s current problems in trying to hold his party together over the infrastructure bill, the Build Back Better Act and managing the debt ceiling have given him the opportunity to garner the column inches and broadcast mentions again,” Shanahan said.

“The former president operates continually in campaign mode and loves nothing more than getting the attention of his base as he continues to tour those parts of the country still willing to enable his election-steal narrative.

“If one was to make a logic-based case for a Trump run in 2024, the chances would be that 45 would be far more likely to be in a courtroom than a presidential debate in the run-up to November ’24,” Shanahan went on.

“Court proceedings are swirling around him; the outcome of the probes into the January 6 Insurrection are unlikely to favor him, and many Republicans in Washington would love to move on from the bandwagon-of-madness the Trump Show imposed on the country from 2015 onwards. But Trump doesn’t operate on logic. He sees the world only through a lens of how events can benefit him personally, and he’ll currently be seeing Trump ahead of Biden in the polls for the next presidential election.”

“The fact he’ll be an even less fit 78-year-old in three years’ time; that he has alienated many of the donors he drew into his 2016 and 2020 campaigns and that he still hasn’t regained the social media accounts that amplified his lie-ridden rhetoric for so long should give him pause and the Democrats succor,” he said.

“But none of the negatives will unduly bother him. As he is now, Trump will play on any opportunities the Democrats offer him. If Biden fails to land his infrastructure and economic recovery agenda, that will fuel Trump. If the midterms burn Team Schumer and/or Team Pelosi, that will fuel Trump. And if Biden’s popularity remains underwater, that will provide a putative Trump campaign with rocket fuel.

“Donald J. Trump should be a burnt-out political case,” Shanahan said. “In a year’s time, he may well be. But for as long as possible he’ll tease, he’ll rant and he’ll covet the media’s attention. Treading that very narrow tightrope between celebrity and notoriety he’ll continue to do what he does best: making himself the story. As long as politicians, the media and voters are reacting to whatever he says or does, he will be a risk to the Biden administration.”