The two opposition parties of Waddani and UCID released a 4-point communique urging the international community and foreign investors not to deal with the incumbent government abrogating its legitimacy ahead of a scheduled meeting between the opposition and the government.

“Starting from today Musa Bihi and his cabinet of ministers do not have the legitimacy to continue running the country in accordance with Article 88(1) of the Constitution. Continuance of his administration is tantamount to rule by force and autocracy,” a joint statement of the two parties said.

The parties, in their third point, descended Somaliland to a stage of existence and use of language reminiscent of Somalia’s stalemated political tug-of-war between the incumbent President, Hasan Sheikh Mohamud, and the then reigning President, Mohamed Abdullahi Farmajo.

“We only recognize Musa Bihi as the ‘President whose term expired’ and the ‘Chairman of Kulmiye Party’ alone,” it said.

The parties said they categorically recognized the legitimacy of the House of Representatives, the local councils, courts, and the institutions delivering social services.

“We call on the international community and foreign companies to neither enter any agreement with the outgoing president whose term in office expired, cooperate with him in any form nor support him or his cabinet of ministers in any way,” the statement said.

“We urge the armed forces and security agencies to abide by the Constitution as stipulated by Article 123(1, and not to take unlawful orders/directives from the outgoing President,” the statement added, not explaining who the parties would recommend would be giving requisite orders in lieu.

According to former minister, Ali Mohamed Waran Adde and Mayor Abdikarim Ahmed Moghe, there was a scheduled meeting between the opposition and the government and that the opposition statement was premature jumping the gun.

The meeting was to have happened at 10:00 a.m. on Monday. How the opposition press statement would impact on that remains to be seen.

Opposition parties, too, have played an undeniable part in the delay of a sequence of actions banking on extending their support as contentions escalated and words were exchanged fully well knowing that the government stood more to blame losing face and credibility as issues dragged on no matter what.

It is also a first that opposition parties condone anarchy and a state of ‘statelessness’ to further their cause without giving the least thought to the welfare and stability of a country whose only currency with the outside world was its undivided unity to safeguard its stability and mechanisms of conflict resolution.

Despite an extension of two years that the Somaliland parliament’s Upper House made for the government, President has been repeating that his government was going to hold elections within the nine months previously set by the national electoral commission. But this assertion struck no chords with either the public, the opposition, or international partners since he showed acute reluctance to dialogue and mediation which never failed to defuse tensions on earlier stalemates. 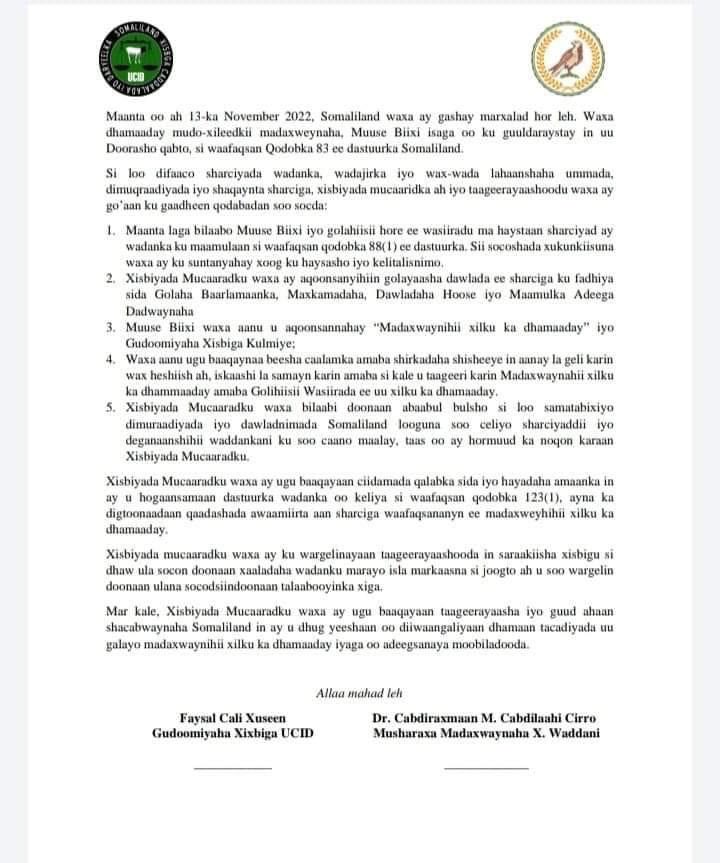