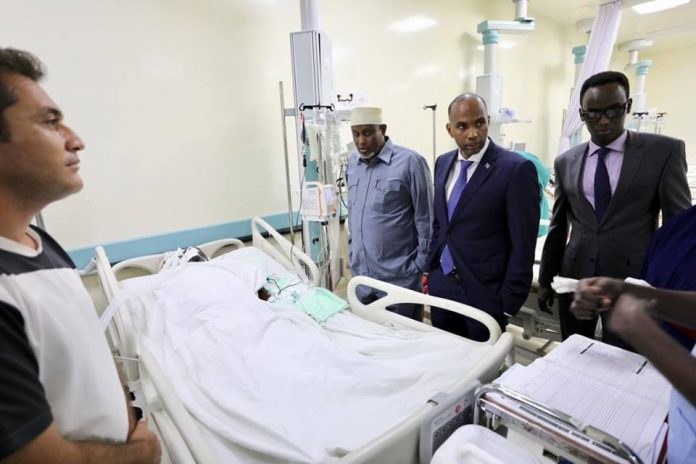 Member of Somalia Federal Parliament, Mohamed Mursal Mohamoud ‘Barrow’ was critically injured, Saturday evening, by a car bomb planted under the driving seat of his car.

The car was passing by the recently rehabilitated National Theatre, at the bottom of one of the roads leading to Villa Somalia, when the bomb was triggered. A relative-cum-bodyguard at the wheel died shortly afterwards as his life-blood oozed out onto the street before paramedics reached the scene.

MP Barrow was rushed to the nearest hospital but later transferred to the more equipped, better-staffed Recep Ordugan hospital, ex-Digfeer.

Hassan Ali Kheyrre, the Federal Government of Somalia Prime Minister, accompanied by a Lower House of Parliament Deputy Speaker, and other members of the SFP, visited the heavily sedated, semi-conscious MP, praying to Allah that he be spared of the deadly assault.

The PM wished him a speedy recovery, saying that his government will closely follow the MP’s case, and may even send him to Turkey for further treatment if so developments warranted.

MP Barrow is among those representing the Southwest Federal State (Ex-Bay) at the Lower House of the Somalia two-House parliamentary system.

Despite a gargantuan effort which the international community put into saving Somalia from itself, little progress can be reported on security as the Qaeda-linked Al Shabaab fighters keep making their presence felt in and around the beleaguered federal capital, Mogadishu, at all hours using a variety of methods.