It is a world that is walked by the dog where the dog should have been walked by the world. If there is another explanation, it eludes me.

Take the case of the Republic of Somaliland (ROS).

History testifies to the fact that:

The prevalent attitude of the world if it continues would only help Mogadishu keep dreaming more and more of what it is not, naturally leading it to fall off the precipice on its somnolent sleep-walk.

Despite all the glaring facts on the ground and the stark contrast between Hargeisa and Mogadishu, the world unfairly bestows undeserved attention and resources on a losing cause – Mogadishu. It sends a string of diplomatic envoys to non-existent, symbolic ’embassies’ in Mogadishu. It sends abundant resources and economic opportunities to a receptacle that cannot possibly hold it. It sends technical advisers and military hardware. It re-builds schools, roads, bridges, airports and seaports and stuffs fat banknotes that have a way of emptying themselves as soon as they are filled.

The world helps Mogadishu loot all the reserves and assets that should have been rightfully divided between the ex-British Somaliland and the ex-Italian Somalia since these resources and rights have come to be during their ill-fated union.

The world, above all, helps Mogadishu deny the existence of Somaliland and its people over which it has the least right to patronize – a path that would only lead to another bloody confrontation between Hargeisa and Mogadishu which will certainly spill over to all neighboring regional administrations.

The world helps Mogadishu claim jurisdiction over Republic of Somaliland seas and territories which, again, has ominous portending for the region.

The world, by humoring Mogadishu even when it recognizes its erring ways, is only earning the wrath and scorn of the people of the Republic of Somaliland day after day, making them lose faith in the shallow, bold-faced lies of the world relating to democracy, human rights self-determination and the like that has so far drew the line between barbarity and civilization.

Does that world look or sound fair to you? NO? Fabulous!

On Tuesday, 7 April, the Guardian, falling for one of  Mogadishu’s monkey escapades, wrote “Somalia lends support to Saudi-led fight against Houthis in Yemen“. It went on to relate that:

Abdisalam Hadliye, Somalia’s foreign minister, said on Tuesday his country had “officially approved its airspace, land and territorial waters to be used for the air invasion to prevent the Shia Houthis’ takeover of Yemen”.

The so-called FM typically included ROS territory in his sweeping of ‘support’ that he dreamed of giving – and so the Guardian report went on to say.

Sources in Mogadishu said Bosaso in north-east Somalia and the Berbera seaport in the breakaway region of Somaliland are to be used for the operation because of their proximity to Yemen. They said: “The approval came with a leasing of Somalia’s airspace by the oil-rich Gulf states.”

Another example that the world should look at and analyse is the continued claims – at all levels – of a world spoon-fed weakling in Mogadishu over a stronger, more democratic, self-reliant, fully functional democracy embodied in the fact and constitution of a twenty-four year old Republic of Somaliland.

The Mogadishu police command website, for instance, has a page showing “The semi-autonomous administration of Somaliland’ police force, posting pictures of past and present Police Commanding generals of the Republic of Somaliland.

The page shamelessly portrays Somaliland as one of Mogadishu’s many emerging federal tin-pots it ‘rules’ – which it is not and will never be according to the referendum the people of Somaliland, again, overwhelmingly votes to restore its afore-lost sovereignty.

The screenshots below should convince the world of (a) the fallacy of its values, and (b) the continued, naked aggression of Mogadishu against a Republic of Somaliland that is here to stay – whether Mogadishu or the world concedes it or not. 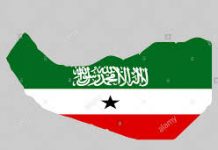 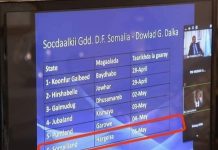 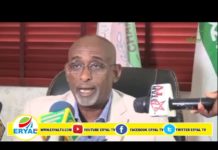 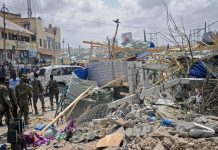