Every day trucks loaded with the narcotic plant khat, grown in northeastern Ethiopia, hurtle along rough roads through the desert to make fresh deliveries to eager customers across Somaliland. 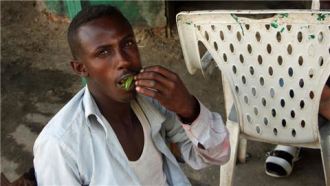 It’s estimated that 90 percent of adult males in the autonomous region of Somaliland chew khat for mirqaan, the Somali word for its euphoric effect.

Khat has become so enmeshed with Somaliland’s culture and daily life it has become an important tax earner for the government. In 2014, khat sales generated 20 percent of the $152m budget.

But despite this windfall, plenty of critics highlight the disrupting influence khat has on family life – from financial waste to domestic violence – and on the society at large.

“The problem comes down to the man not being part of the family and the woman being left to do everything,” said Fatima Saeed, a political adviser to the opposition Wadani Party, who previously worked for 15 years with the United Nations.

Saeed highlighted potential side effects of khat chewing. “It can bring about hallucinations, sleeplessness, loss of appetite, deaden sexual urges – while in others it increases them.”

Others noted the flipside of the economic impact.

“Khat is a massive burden on Somaliland’s fragile economy since it means that a large percentage of its foreign currency is used to purchase khat,” said Rakiya Omaar with Horizon Institute, a Somaliland consultancy firm helping communities transition from underdevelopment to resilience and stability.

Somaliland spends $524m a year – about 30 percent of its gross domestic product – on khat from Ethiopia, said Weli Daud with the Somaliland Ministry of Finance.

Khat has a long history in the Horn of Africa and surrounding region. Its leaves were viewed as sacred by the ancient Egyptians, while Sufi religious men chewed khat to remain awake to study the Quran. Now khat is very much in the mainstream.

“It’s better than alcohol as you can still function normally afterwards,” said Abdul, a journalist in Hargeisa, Somaliland’s capital, who previously lived in the US and chews khat when on deadline.

“It affects people differently. It depends on your personality. After khat some like to read, others to work.”

The sun-blasted streets of Hargeisa are dotted with khat stalls. Many display a colourful number incongruously emblazoned against a bright pink heart shape, identifying a stall’s particular khat supplier to cater to customers’ preferences.

“There’s about 5,000 numbers,” said a customer at a stall selling khat from supplier 725. Customers typically spend between $6 and $10 for a day’s worth of khat.

This amounts to more than $1m spent on khat daily, Daud said.

“Business is good,” said Zahre Aidid, a so-called “khat mama” of 22 years who runs a stall beside a dentist’s office in central Hargeisa.

Originally she owned a shop and small café but decided to enter the khat trade as a way to expand her business prospects, Aidid explained. Other women had less choice.

“Many entered the khat business after the civil war as the only way to earn money to provide for their families,” Aidid said.

“After they started doing it, they knew how to do it well – so they continued. An unaccountable number of women now sell khat.”

Somaliland has a chronic unemployment problem – about 75 percent of its workforce are jobless – although this doesn’t deter people from a monthly khat habit that can cost $300 a month.

“My friends lend me the money,” said unemployed Abdikhalid in Hargeisa. “Once I’m employed again I will return the favour.”

And what of the 10 percent not chewing khat?

“I don’t chew as I know the effects,” said 24-year-old university lecturer Abdukarim at a busy Hargeisa coffee shop.

“Initially you feel happy, confident, strong and high. The problem is the result. At the end you are weak. It should be banned, but I don’t want to say more here.”

During the afternoon khat lull it turns into a ghost town. Despite a relatively busy small modern port operating on its outskirts, in the old town centre buildings are crumbling, its economy flatlining.

Saeed supported the 2014 khat ban implemented in the United Kingdom because of the negative impact khat was having on the Somali diaspora community.

“Khat would arrive at 5pm on the plane and by 6pm men had left homes and wouldn’t return until 6am,” Saeed said. “After the ban it was like people woke up from a deep sleep. They started looking for jobs, being part of the family.”

Another concern in Somaliland is the rising number of teenagers chewing khat while smoking shisha, exacerbating health risks, Saeed said. She estimated about 20 percent of Somaliland women already chew khat – a figure which continues to rise – although they do so out of the public eye.

An outright khat ban in Somaliland simply isn’t achievable, Saeed said, although regulation of when it’s imported and sold during the day would help ameliorate problems, as would implementing an age limit – currently there isn’t one.

But, she added, the government won’t take any action because of the amount of money earned and vested interests involved.

Others are ready to defend khat, arguing it plays an important communal role.

“In the West it’s often difficult for people to interact, but here they learn about their neighbours and what problems they have.”

Such cultural cohesion, however, has its limits, said Omar, a British Somalilander who returned to Hargeisa to open a printing press.

“The problem is we need to develop this country, and for that you should be working eight hours a day. But that’s not happening here,” Omar said, explaining how most employees work half a day and then head for their khat.

When asked about khat-related problems Aidid replied: “I don’t insult khat as it’s my business.”