arie Antoinette may or may not have said “Let them eat cake” at the outset of the French Revolution 200-plus years ago, but former United Nations General Secretary Kofi Annan just made Marie Antoinette’s alleged dictate seem downright magnanimous. Pointing his finger at America and other Western democracies, Annan this week said Americans should begin eating insects to do our part to address the fictitious global warming crisis. 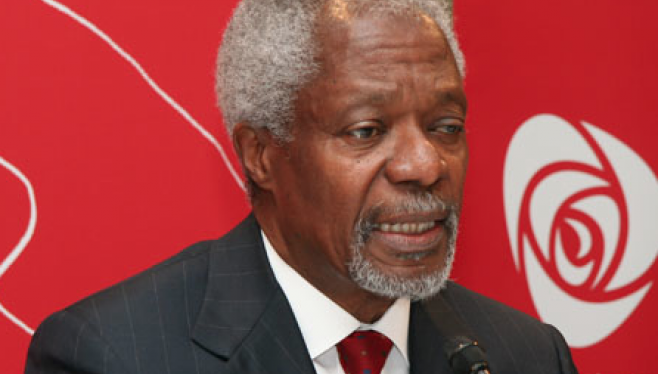 Complaining about a “rapidly growing middle class,” Annan told the Guardian that more people being able to afford beef and chicken is causing “a major threat to the climate” because raising livestock produces global warming emissions. “There are alternative sources of protein,” said Annan. “Insects have a very good conversion rate from feed to meat.”

Insects “make up part of the diet of two billion people and are commonly eaten in many parts of the world. Eating insects is good for the environment and balanced diets,” said Annan.

Annan misses a very important point. People in poverty-stricken Third World nations generally do not “choose” to eat insects to “balance” their diets. They resort to eating insects because they live in abject poverty and cannot afford steak or chicken Florentine.

Make no mistake, Americans empathize with people in Third World nations who are malnourished and go to bed hungry. It is for this reason that our government sends billions of dollars in foreign aid to such nations and, additionally, individual Americans give generously to charities such as Save the Children. However, it’s one thing to empathize with people in Third World poverty and quite another thing to expect Americans to devolve into a similar life of misery.

“We need equitable and effective polices, which ensure that the world’s richer countries support the aspirations of developing countries to follow a sustainable development path,” Annan asserted.

Apparently, in the worldview of Annan and the United Nations, it is not “equitable” that Americans currently give mere billions of dollars to other countries around the world. According to Annan, they have a right to much more. Only hundreds of billions of dollars – or even trillions – in global entitlement payments would satisfy Americans’ “fairness” debt, according to Annan.

Annan’s asserted plans help explain why the United Nations continues to assert a global warming crisis even while hurricanes, tornadoes, droughts, and other extreme weather events become less frequent in our modestly warming world, and while global soil moisture, crop production, and foliage dramatically improve. It was never about climate, temperatures, or the environment; it has always been primarily about punishing Western democracies and our freedom-centered, wealth-creating values.

Marie Antoinette probably did not utter the seemingly heartless declaration, “Let them eat cake,” But even if she did, Kofi Annan has taken dietary cruelty to another level.