A bill that would give Congress a voice in any nuclear agreement between world powers and Iran passed the Senate overwhelmingly on Thursday afternoon.

The measure, which was approved 98 to 1, withstood months of tense negotiations, White House resistance, the indictment of one of its sponsors and a massive partisan kerfuffle over a speech to Congress by Israeli Prime Minister Benjamin Netanyahu just as an accord was coming together. The lone vote against the bill was cast by Senator Tom Cotton, Republican of Arkansas. 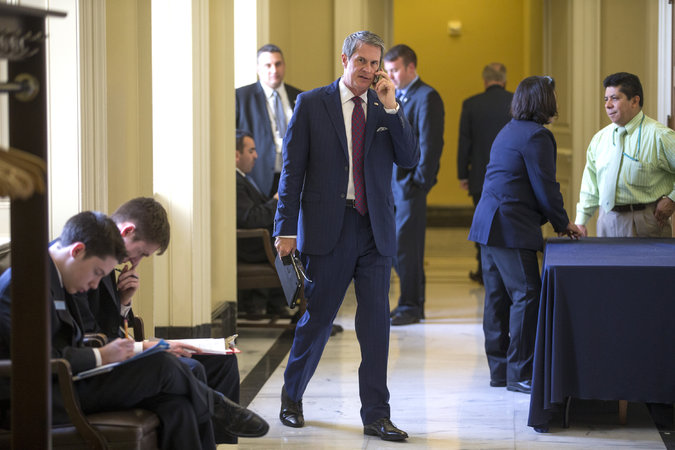 The House is expected to take up the Senate measure as early as next week. “I look forward to House passage of this bill to hold President Obama’s administration accountable,” House Speaker John A. Boehner said in a prepared statement.

Republican infighting prevented a debate of significant amendments to the bill, leaving some members deeply unhappy that they were unable to weigh in further on a matter that many said was the most significant of their careers. But in the end, a bipartisan accord that seemed nearly impossible in the upper chamber just a few months ago came together by a convincing margin.

“Let me be clear,” Senator Mitch McConnell, Republican of Kentucky and the majority leader, said on the Senate floor Thursday, as he encouraged senators to approve the bill while noting the procedural fights that hobbled the process. “Our response to this should not be to give the American people no say at all,” adding, “Make no mistake that will this not be the end of the story.”

Republicans and Democrats had gingerly worked out a deal to allow votes on a few amendments to the bill. But that arrangement fell apart when Senator David Vitter, Republican of Louisiana, used procedural moves to stall the bill Wednesday.

Mr. Vitter, long an antagonist to Senator Harry Reid, Democrat of Nevada, when he was majority leader, became one for Mr. McConnell this week. The majority leader wanted to show both parties that he could pass legislation with ample room to debate amendments, but Mr. Vitter refused to go along with his colleagues, ending the process Thursday.

“I am deeply disappointed by the direction this debate has taken,” said Senator Marco Rubio, Republican of Florida and a candidate for president, who had wanted to debate an amendment that would force Iran to recognize Israel.

Mr. McConnell desperately wanted to get through the Iran matter on the Senate floor to move on to a difficult and contentious trade agreement before critics rip it to shreds.

The interim agreement reached between Iran and six world powers would dismantle much of Iran’s nuclear program, dispose of most of the nuclear material that could be used to make an atomic weapon, strictly limit Iran’s enrichment of uranium and set up an international inspection regime in exchange for a lifting of economic sanctions.

The bill that passed the Senate Thursday would require that the administration send the text of a final accord, along with classified material, to Congress as soon as it was completed. It also halts any lifting of sanctions pending a 30-day congressional review, and culminates in a possible vote to allow or forbid the lifting of congressionally imposed sanctions in exchange for the dismantling of much of Iran’s nuclear infrastructure.

“I think the American people want the United States Senate and the House of the Representatives on their behalf to ensure that Iran is held accountable,” said Senator Bob Corker of Tennessee, the chairman of the foreign relations committee who shepherded the bill.

The bill in question, originally introduced in February by Mr. Corker and Senator Robert Menendez, Democrat of New Jersey, enjoyed bipartisan support because its central concern was congressional prerogative. But the politics of the bill were immediately scrambled when Mr. Netanyahu gave a speech to Congress against the wishes of the White House and the majority of Democrats.

Soon after, Mr. Cotton, wrote a confrontational open letter to the Iranian government and got most of his Republican colleagues to sign on. Then, in another twist, Mr. Menendez was indicted and stepped down from the committee, leaving Senator Benjamin L. Cardin of Maryland, who is far less hawkish, in charge of the Democrats’ role in the bill.

Subsequent fights over amendments ended Thursday with nothing of significance done to change the final measure.