Shares of MoneyGram International Inc. surged as much as 41 percent Wednesday after a report that Western Union Co. was in talks to acquire its Dallas-based rival.

The stock pared much of those gains, however, when Western Union denied the report.

“In view of the high level of market activity in our stock today, Western Union states that current news reports indicating that our company is in discussions to acquire MoneyGram International Inc. are not accurate,” the company said in a statement Wednesday.

Bloomberg reported Tuesday that Western Union is in early-stage talks to buy the company, as both contend with competition from upstart money-transfer companies.

Talks may still fall apart, said the people, asking not to be identified because the matter is private. One potential hurdle is whether antitrust regulators would block the deal, the people said. Winning approval would have been less feasible several years ago before new competitors fragmented the once heavily consolidated remittance industry, they said. 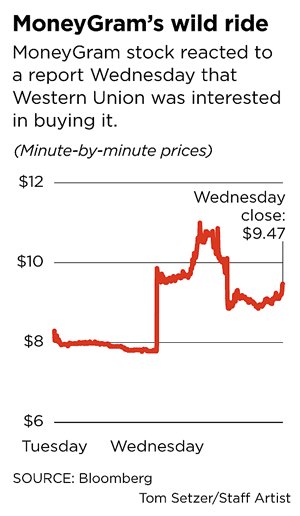 Western Union and MoneyGram — the two dominant players in the remittance industry — are facing price competition as companies including WorldRemit, TransferWise and Wal-Mart Stores Inc. give their customers new options for moving cash. MoneyGram reported a loss of $72 million in the first quarter, compared with a profit of $39 million in the year-earlier period.

In an acquisition Western Union would also have to take on about $960 million of MoneyGram’s debt.

MoneyGram lost a key relationship with Wal-Mart in 2014 when the retailer decided to start its own money-transfer business. MoneyGram’s market value dropped by half in the three years through Monday.

Though Western Union has fared better, its shares are still well off highs seen before the global financial crisis. The Englewood, Colo.-based company has a market value of about $11 billion.

MoneyGram, controlled by Thomas H. Lee Partners LP and Goldman Sachs Group Inc., explored a sale in 2013, drawing bids from Euronet Worldwide Inc., Carlyle Group LP and TPG Capital, Bloomberg News reported at the time. The company was also the target of an unsolicited offer from Euronet in 2007.

Thomas H. Lee and Goldman Sachs bought MoneyGram in 2008 in a deal valued at $1.65 billion including debt, outbidding Euronet.

What A Western Union, MoneyGram Merger Will Mean To Africa

Shares in MoneyGram International, one of the largest money transfer firm s in the world, rallied as much as 41 percent after Bloomberg, citing sources close to the deal, reported that the industry leader Western Union was in “early stage” talks to acquire MoneyGram.

Western Union later denied that such talks were taking place and said the Bloomberg report was “not accurate”, but by then MoneyGram shares had closed 21 percent higher.

Marrying the two companies would have meant almost all transfers across the world would be going through one company and would have had profound consequences for competition in the remittance market especially in Africa, where remittances are a very important part of most family incomes and a big source of governments foreign exchange.

In a 2014 report by Overseas Development Institute (ODI), a UK-based think tank,  said Sub-Saharan Africa receives nearly $15 billion in remittances from Africans living abroad and pays about 12 percent, or $1.8 billion, of this in transfer fees.

A big chunk of these transfer is channeled through large established firms like Western Union and MoneyGram, while other smaller rivals including WorldRemit, TransferWise and Wal-Mart Stores also get some share of this cash.

Online mobile money transfer service WorldRemit founder and CEO, Ismail Ahmed, said if the deal between Western Union and MoneyGram is approved it would create a “monstrous monopoly” that would affect the way Africans living abroad transfer money back home.

“Their extortionate fees amount to an annual ‘super-tax’ costing Africa alone an estimated $1.8 billion every year. In many corridors, the merger would eliminate the limited competition that currently exists,” he added.

Traditional money transfer avenues have come under stiff competition in recent years from competitors that are using alternative technology such as Bitcoin transfer and mobile money remittances — increasingly becoming popular in Africa — to reach the consumers at much cheaper costs.

Services such as online money transfer, using Bitcoins  or in other form, have picked up over the last half decade with companies like WorldRemit reaching over 250,000 money transfers per month.

In the face of such competition offline firms like Western Union are looking for ways to maintain their market dominance and mergers and acquisitions are always on the card.

MoneyGram, which made a loss last year, was in the market looking for a buyer in 2013 but rejected offers from interested parties like Euronet Worldwide, Carlyle Group and TGP Capital, Bloomberg reported.

“Online services such as WorldRemit are drawing away their customers with greater convenience and honest pricing, but more than 95 percent of remittances are still sent offline, primarily through these two companies,” Ahmed said.

“We call on regulators to block this deal unconditionally – in the interests of migrants and expats around the world who rely on international money transfer services to support friends and family in their homelands.”