Burundians danced in the streets of their capital Wednesday morning after General Godefroid Niyombare announced a military coup against President Pierre Nkurunziza. Niyombare, an army officer who was Burundi’s intelligence chief until Nkurunziza fired him three months ago, declared President Pierre Nkurunziza’s bid for a third term illegal, and announced that the president had been deposed. 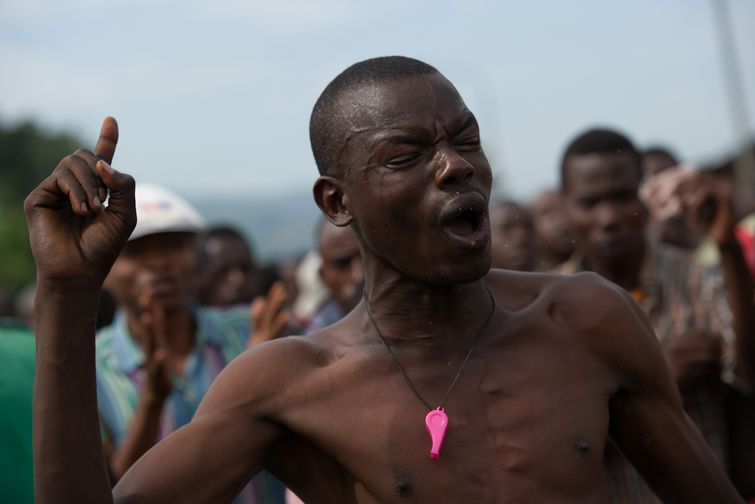 Since late April, protests against President Pierre Nkurunziza’s legally-controversial reelection campaign have rocked the country’s capital, Bujumbura. At least 19 people had been killed — and the UN estimates a staggering 50,000 have fled from their homes as a result of the violence.

The coup attempt arose out of those weeks of tension. There was widespread concern that Nkurunziza’s attempt to hold on to power could spark much more serious violence, perhaps even a civil war or mass killing of civilians. It is not yet clear whether the coup attempt will calm the situation, or if it will cause the election-related violence to escalate into a more dangerous conflict.

The coup attempt follows weeks of growing tension and violenceGeneral Niyombare’s coup attempt appears to have arisen out of Burundi’s mass protests, themselves a reaction to President Nkurunziza’s bid for a third term in office. On April 25, Nkurunziza’s party, CNDD-FDD, nominated him for a third term as president in the country’s elections, scheduled for June. The next day, protesters took the streets, calling the move an illegal power grab.

It’s actually a little bit tricky to say whether Nkurunziza’s run for a third term is illegal. Nkurunziza got the Supreme Court to approve his candidacy for a third term by arguing that because he was appointed to his first term, he has only run for president once, and is thus eligible to run again.

But protestors saw it as a violation of the 2000 Arusha Agreement, the peace accord that set the terms for Burundi’s political order after the country’s civil war ended in 2005. The accord, which the constitution is supposed to implement, says “no one may serve more than two presidential terms” — seemingly ruling out a third term.

Nkurunziza’s opponents have reason to distrust his intentions. For the past five years, the president has pushed opposition leaders out of the country and restricted the press, the rights of independent political parties, and the freedom to protest. “This present electoral problem is the result of the last five years’ rule of President Nkurunziza,” Thierry Vircoulon, the project director for Central Africa at the International Crisis Group, writes via email.

The protests, which have occurred more or less daily since Nkurunziza was nominated for his third term, have at times devolved into clashes between police, government-aligned youth, and protesters. The US and EU have called for the elections to be delayed — on Monday,Belgium went so far as to suspend aid, arguing both that an election could not be held under current conditions and that Burundian police were killing protestors without justification.

Wednesday morning, Niyombare decided to try to put an end to the conflict. “The masses vigorously and tenaciously reject President Nkurunziza’s third term mandate in accordance with the constitution and the Arusha Accord,” the general said, per the BBC. “President Pierre Nkurunziza has been relieved of his duties. The government is overthrown.”

Burundi was already at risk of civil war, and the coup attempt could defuse the situation — or cause it to escalate

It’s still not clear whether the coup attempt has succeeded — that is, whether forces aligned with the general can successfully keep Nkuruziza out of power. But there’s another concern — whether the struggle for power in Burundi escalates into a broader, more deadly conflict. Burundi is still politically fragile, and lacks the strong institutions necessary to address the legacy of years of violence. In that climate, any number of different sparks could set off another round of serious violence.

“I think the risk of civil war–level violence is pretty high,” Cara Jones, a professor of political science at Mary Baldwin College who studies Burundi, said when we spoke on Monday, before the coup attempt was announced. While Jones and other experts have suggested the army’s move might be end up stabilizing the country, as Burundians generally trust the military, it’s far from clear that the army will succeed at 1) holding on to power, 2) preventing violence from breaking out after the coup, or 3) successfully setting up a peaceful transition to a non-military government.

The potential reaction of the Imbonerakure, the youth wing of Nkurunziza’s CNDD-FDD party, is a particular concern. One chilling May 8 Reuters report, for instance, claimed that members of the Imbonerakure, the CNDD-FDD party’s youth wing, were going through refugee camps and painting red marks on the doors of people “to be targeted” by government forces. If they respond violently to the coup attempt, that could have devastating consequences for civilians.

Although some media reports warned last week that a genocide could be imminent, it is more likely that the violence would be targeted along political lines rather than ethnic ones. The divide between Nkurunziza’s party supporters and opponents doesn’t pit the Burundian majority Hutu group against the Tutsi minority: members of each group are on both sides of the conflict. The divide instead reflects civil war–era splits between rebel groups that evolved into parties, as well as patronage networks (people who get benefits and payoffs from the government and people who don’t).

Violence targeted on political lines would not meet the legal definition of genocide, but it would still be extremely dangerous for Burundi’s civilians. “Mass atrocities [don’t] have to be about ethnicity,” Stephanie Schwartz, a former program specialist at the US Institute of Peace and current PhD student at Columbia who studies Burundi, notes. “If you’re looking to eliminate all your competitors in a planned, methodological way, then you’re still labeling a category of people” to be exterminated or driven out of the country.

The violence could also provoke a regional refugee crisis. Given that 50,000 Burundians have already fled the country, Jones thinks the total number displaced could get as high as 350,000 if the conflict escalates.

That would be both a humanitarian and security crisis. According to both Schwartz and Jones, massive refugee flows in Africa’s Great Lakes region, where Burundi is located, tend to have destabilizing effects on the entire region. The massive population shifts put a huge strain on government resources and make it easy for violent militias to travel from country to country, expanding their bases of operations.

Burundi’s conflict, then, isn’t just a concern for Burundians: it could potentially threaten the entire region.