Galaydh, Qoorsheil, Nageeye, Indhosheil and co. practically revealed their moles in Somaliland calling for support of the mass rallies that Waddani’s Irro and Seed called for. Galaydh, the elader of the group, asked all of Somaliland to stand behind Waddani party and take part in the so-called “peaceful” rallies knwoing all too well that once party thugs come out to the streets one would expect anything but a peaceful, serene walk by of responsible party members.

Waddani like any other part has all the right to call for rallies. But at this time – with people like Galaydh Indhosheil, Qoorsheil and Nageeye pushing it? What a laugh!

The latest, open support of the EU rep in Somaliland/Somalia for disrupting the Somaliland peace and for sabotaging the 24th anniversary of the Somaliland independence on 18 May, is another indication that the so-called protests against the extra 4-month extension that the Elders appended to the government tenure is anything but that.

The Galaydh et al neo-USP members in Mogadishu, the Hassan Sheikh disrespect of Somaliland-Somalia talks, the Waddani call for protest marches/demonstrations, the unconstitutional Madasha and its inflated, puerile, self-important views of its ‘role’ in Somaliland politics,  the unacceptably hollow media ‘briefs’ of Irro, the ill-concealed, alarming support that Michele Cervone d’Urso, the EU head of Mission in Somalia/Somaliland lent Waddani, the Madasha, Puntland and Hassan Sheikh all point to one thing: that a hitherto underground pro-Somalia union movement has come to the open. 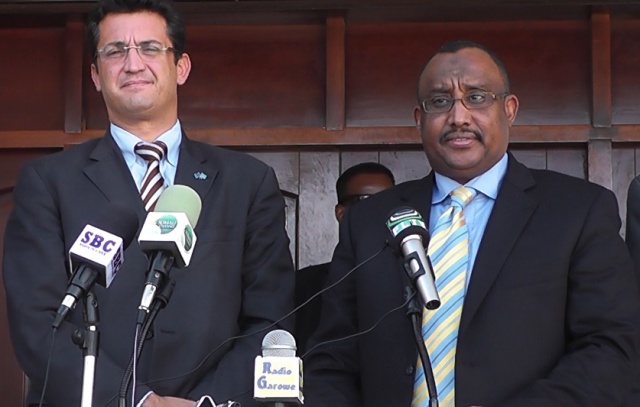 Nicholas Kay, Ambassador Nicholas Kay, the Special Representative of the UN Secretary-General and Head of UN Assistance Mission in Somalia (UNSOM), too, is part of this conspiracy, showing  his hand in the latest tweet on Somaliland elections he put on the Twitter today.

Deeply concerned by move to postpone #Somaliland elections by 22 months. Urge reconsideration. Time to set a positive example for democracy

It has become very obvious, too, that the incumbent House Speaker of the Somaliland House of Representatives, the Chairperson of Waddani Party has little regard for the stability and unity of Somaliland, but is being, instead, a consenting victim of political manipulation by his juniors and subordinates in party on top of the more sinister, more subtle pressure exerted on him by Mogadishu and the EU. The man is said to be particularly under the rule of thumb of junior officers such as Buubaa and Fatima Saeed (below).

In light of above, Somalilanders need to look deeper into the matter and re-arrange their national and international approaches to the issue of our sovereignty, a sovereignty that is bashed, beleaguered, feebled, bruised, battered and pummeled by its own. Needless to say that ‘its own’ are being exploited by other forces that have found chinks in the armour through the politicaol and material greed of Somaliland-born people like Irro, Galaydh, Fozia and the rest – some of whom are avowed, openly hostile traitors to the popular Somaliland cause: its independence.