Islamist militants fromSomalia attacked two police patrols in neighbouring Kenya on Tuesday, triggering a gun battle in a rural area hit by a string of cross-border raids, both sides said.

Somalia’s al Shabaab fighters said they had killed 25 Kenyan officers, an account contradicted by the police force that said one of its men had died and four had been wounded.

The al Qaeda-linked militants said they ambushed the police about 70 km (40 miles) north of Garissa, a town where the Islamists raided a university and killed 148 people in April.

Al Shabaab militants, fighting to overthrow a Western-backed government in Somalia, have launched several attacks inside Kenya, trying to force it to pull troops from a African peacekeeping force in their homeland.

The assaults have piled political pressure on the Nairobi government, which has promised to carry on with its Somali mission, and devastated Kenya’s tourism industry, one of its main sources of foreign income.

Police said one officer had died from his wounds after the attacks in the Fafi and Yumbis areas, one was critically wounded and three others suffered minor injuries.

“A contingent of officers responded for reinforcement and on arrival at the scene, engaged the attackers in a heavy fire-fight,” Inspector General Joseph Boinnet said in a statement.

Kenyan media had earlier reported that as many as 20 officers could have been killed, and al Shabaab said 25 died.

“We took all their weapons. There were some Kenyan forces that escaped in the course of the ambush fighting,” al Shabaab’s military operations spokesman, Sheikh Abdiasis Abu Musab, said. 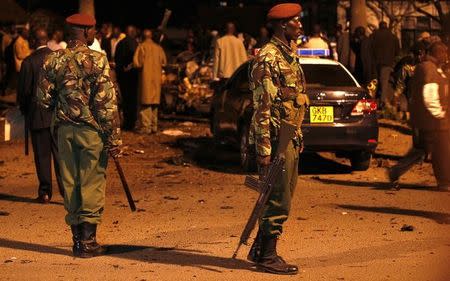 Last week, al Shabaab attacked Yumbis and hoisted its flag on a mosque where fighters held prayers before heading to another nearby village.

Al Shabaab has killed more then 400 people on Kenyan soil since Kenya’s President Uhuru Kenyatta came to power in April 2013.