At the end of 1920 His Excellency The Governor of Somalia, Sir Geoffrey Archer, embarked on cost-cutting and revenue-raising activities.  He successfully argued that Dervishism had been overthrown and so the Indian contingent in the Somaliland Camel Corps (SCC) was declared redundant and warned-off for return to India.   This left the SCC at a planned strength of 300 mounted Somalis with one base at Hargeisa.  It was maintained that as there was no external threat internal troubles could be countered by mobilizing reservists and calling upon tribal levies.  His Excellency also wished to raise revenue by the introduction of a poll tax.  Neither of His Excellency’s policies were properly thought out, but Whitehall and its place-men wanted efficiency savings plus increased revenue, and that was all that mattered.

Resentment was quickly displayed towards the poll tax.  Inhabitants of the town of Adadleh were prominent in their refusal to pay, and in early September 1921 the SCC (which at that time still included some Indian Sepoys) encircled Adadleh, issued a warning, fired Stokes mortar bombs into the town and then burned property.  Only around 40% of the bombs detonated and one detonated prematurely killing three Sepoys.  However morale and discipline within the SCC was maintained throughout.

Burao now became a centre for dissent against the poll-tax.  His Excellency was in the town on 24th February 1922 discussing the question of the tax with leading local Somalis when an affray took place between the Rer Segullah and Akils of other Burao tribes.  Captain Allan Gibb DSO DCM, an officer in the Civil administration, was in Burao at the time.  Allan Gibb had served throughout the Great War firstly in the SCC and then as Commander of the Tribal levies.  He went forward with his interpreter to the Tug southwest of Burao Fort to halt the disturbances.  A Corporal from the SCC, in civilian clothes because he was on leave, ran forward to warn of the mood of the crowd and the danger of approaching armed tribesmen.  Undeterred Allan Gibb went forward and was immediately shot dead.

As a security measure all Europeans now entered Burao Fort which was occupied at the time by “B” Company SCC.  His Excellency wired SCC Headquarters at Hargeisa instructing that all other available men move to Burao.   By this time all the Sepoys in the SCC had been re-patriated to India. “B” Company SCC was then ordered out of the fort to take action in aid of the civil power against the killers of Captain Gibb.  When ordered to open fire on hostile inhabitants of Burao the “B” Company soldiers declined to do so. 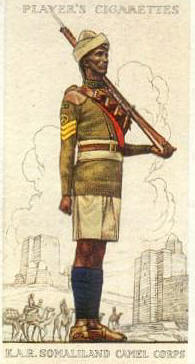 This refusal to obey orders caused consternation in Whitehall and throughout the Protectorate.  The 41st Dogras (Indian Army) were immediately moved over from Aden to garrison the forts and to protect the Europeans in Somaliland.  The subsequent Court of Inquiry recorded its opinion that Somali troops could be relied upon to enforce a government fine of stock (as they later did in collection of a fine imposed as a result of Captain Gibb’s death), but that without support from a foreign garrison Somali troops could not be entirely relied upon for every kind of service required of them within the Protectorate.

The selection of Yao Askari from Nyasaland

The decision makers now decided to disband “B” Company SCC and replace it with a company of Yao Askari from the 1st King’s African Rifles (1KAR).  1KAR, a Nyasaland-based regiment, was at that time garrisoning Nyasaland and western Tanganyika Territory and it had two companies recruited from the Yao tribe.  From these a composite company was formed of 3 British officers, 125 Askari, 1 African clerk and one African hospital-dresser.  The selection of Yaos was an interesting one as the tribe did not herd stock apart from a few goats, and it did not have a word for camel in its language.  Nevertheless the Yaos made splendid soldiers and were physically strong, loyal, disciplined and adaptable.  Nyasaland troops had previously served in the Protectorate with distinction during the Dervish campaigns.  Each Askari was allowed to take one wife and one child-in-arms.

The SCC disbanded the old Somali “B” Company, discharging many men and posting the remainder to “A” Company which remained purely Somali.  When the Yao company arrived it was titled “B” (Nyasaland) Company, SomalilandCamel Corps, King’s African Rifles.  Within three months, and with the help of Somali experts, the Yaos learned about camels and how to ride, manoeuvre, care for, water, feed and generally look after them.  The company’s two Vickers machine guns and three Lewis Guns were all successfully carried and brought into action on camels.  “B” Company quickly learned the rules and procedures of military support in aid of the civil power and became adept at capturing livestock and burning tents and shelters when ordered to do so.

The operation at Baran

One operation in June 1925 involving “B” (Nyasaland) Company was a little more serious.  Sultan Isman Mahmud ordered some of his Northern Mijjertein tribesmen to repair and occupy an old fort at Baran on the as yet undemarcated border with Italian-controlled territory.  There were sound political and commercial reasons behind this action of the Sultan’s as the fort controlled the only waterhole for a considerable distance.  The fort itself was very strongly constructed with stone walls to a depth of four and a half feet containing cunningly-sited loopholes.  A well was located inside the fort.  The powers-that-be in British Somaliland decided that the Sultan’s men had to be evicted and the fort destroyed, and a force was raised comprised of:

On the approach of the SCC the fort’s defenders withdrew to occupy commanding ground nearby.  The 12-pounder, which was an old naval gun hauled by six mules and manned by camel-mounted Somalis from “A” Company SCC, came into action and deeply impressed the Mijjertein.  The Camel Corps soldiers dismounted and captured the commanding ground, killing one Mijjertein in the process.  The fort was now demolished by using 120 pounds of gun cotton that had been brought for the purpose.  The force then withdrew to a suitable location about three miles south of the fort to build a defensive camp with a stone breastwork, and awaited a response from the Mijjertein.  No reponse came (except from the Italians who were irate) and so after a month on the ground the SCC withdrew from Buran.

In 1931 “B” (Nyasaland) Company SCC was motorized.  In 1940 when the British Forces withdrew from Somaliland as a consequence of the Italian invasion 2nd King’s African Rifles (2KAR), a Nyasaland regiment that had been fighting in the Protectorate, took “B” Company SCC with it to Aden and incorporated the Nyasaland SCC Askari into 2KAR.  The Link between Nyasaland and the Somaliland Camel Corps was finally terminated.