It had been downgraded to a dwarf planet. It looked like a fuzzy blob in our best telescopes. And it was often referred to as just an icy orb. Even scientists working on the first mission to Pluto expected to find an old, pockmarked world.

But Pluto is turning out to be full of surprises.

The first zoomed-in image of Pluto was released on Wednesday, a day after the spacecraft made its closest pass over Pluto, cruising about 7,700 miles over the surface. The probe traveled more than 3.6 billion miles to snap the photo, and scientists think it was well worth the trip.

“They would stand up respectably against the Rocky Mountains,” said John Spencer, a planetary scientist on the New Horizons mission.

The height of the mountains is important because it’s a clue that there may be water on Pluto. Scientists know that Pluto’s surface is covered with nitrogen ice, methane ice and carbon monoxide ice. But Spencer says, “You can’t make mountains out of that stuff. It’s too soft.”

That leaves H20 — water ice like we have here on Earth.

“The steep topography means that the bedrock that makes those mountains must be made of H2O — of water ice,” said Stern. “We can be very sure that the water is there in great abundance.”

“Who would have supposed that there were ice mountains?” said Hal Weaver, another New Horizons project scientist.

Before New Horizons was launched, scientists thought Pluto probably had a rocky core surrounded by a mantle of water ice. But they were having a hard time finding evidence of the water ice, Weaver said. He he expects more data from the spacecraft will confirm that the ice mountains mean there is lots of water on Pluto.

“That’s the only way to get these huge mountains, and that’s a big surprise I think.”

Finding water on another world is important because water is considered one of the key ingredients to life as we know it.

Weaver says they’ll learn a lot more about the makeup of Pluto’s ice mountains in the days ahead. It will take about 16 months to download all of the information gathered by New Horizon’s seven instruments during the flyby.

Where are the craters?

Another striking thing about the close-up image of Pluto is what’s missing: impact craters.

Pluto is in the Kuiper Belt, a region of space filled with other icy objects. The New Horizons team expected that Pluto’s surface would have been pelted with some of these objects.

“I would never have believed that the first close up picture we get of Pluto didn’t have a single impact crater on it,” said Spencer. “That’s just astonishing.”

That lack of craters means the surface of Pluto is young, less than 100 million years old, the researchers said. That’s a small fraction of the age of the solar system — 4.5 billion years.

Before the flyby, New Horizons co-investigator Cathy Olkin thought the moon would be an ancient terrain covered in craters.

“Charon just blew our socks off,” Olkin said as the new image of the moon was flashed on the screen at a news briefing.

“It’s a small world with deep canyons, troughs, cliffs … dark regions that are still slightly mysterious to us.”

She said Charon has a series of troughs and cliffs that extend 600 miles across the surface.

Besides Charon, Pluto has four other small moons: Styx, Nix, Kerberos and Hydra.

New Horizons captured the first images of Hydra. It’s just pixels, but NASA is very excited about it because it shows the elongated moon’s size. 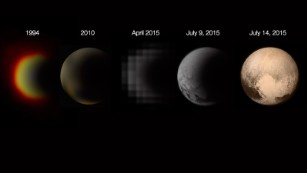 Photos of Pluto taken over time show how the planet has come into focus.
Even before New Horizons made its close flyby, a more distant image on Pluto caught the public’s imagination: a prominent, bright heart-shaped region.

That region is being named the Tombaugh Reggio in honor of Clyde Tombaugh, the man who discovered Pluto in 1930.

The spacecraft was launched on January 19, 2006, before the big debate started over Pluto’s status as a planet. In August of that same year, the International Astronomical Union reclassified Pluto as a dwarf planet.

But Stern has always disagreed with the IAU’s decision.

“I don’t know what to call this thing except a planet,” Stern told CNN.

New Horizons is now more than a million miles on the other side of Pluto. The probe will keep flying out into the Kuiper Belt. NASA may extend its mission and send it to explore another small world.

The New Horizon’s mission completes what NASA calls the reconnaissance of the classical solar system, and it makes the United States the first nation to send a space probe to every planet from Mercury to Pluto.

CCF Tells US Republic of Somaliland Was Not Somalia