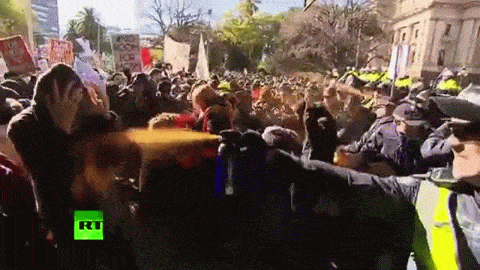 Police in the city of Melbourne used pepper spray to break up scuffles between nationalist supporters from the Reclaim Australia movement, protesting against the Islamization of Australia, and the participants of an anti-racist counter rally.

The Reclaim Australia lobby is holding rallies in numerous cities across the country, which are predicted to attract thousands of supporters, including members of the nationalist movement. The events are also being attended by those opposing the marches, who deem them to be racist.

In Melbourne, the Reclaim Australia supporters managed to gather around 200 members of the Patriot Defense League, who gathered near Parliament House. However, they were vastly outnumbered by around 3,000 anti-racism demonstrators, from the No Room For Racism group.

Police reported clashes between the two groups and they had to use pepper spray to try and quell the demonstrators from both sides. Officers added that some people needed medical attention. A heavy police presence across the country prevented the protests from spiralling out of control.

The Reclaim Australia activists, some of whom praise far-right ideologies, are calling for the protection of national values and basic rights for Australian citizens, such as freedom of speech. They are also protesting against what they perceive is the Islamization of the country.

Reclaim Australia? It looks like the racists have already got control of the country pic.twitter.com/Apk4JuQkhF

They want English to be the country’s primary language and have the right to celebrate national traditions and in particular, Christian holidays. The far-right group is also calling for so-called ‘traitors,’ who betray the country’s values to be deported.

There were huge counter-rallies held by supporters who are appalled by the nationalist and racist stance of the Reclaim Australia activists. They staged their own demonstrations under the slogans ‘no room for racism’ and Australia is ‘not yours to reclaim.’

Half an hour until Reclaim, Anti racist protesters are warming up with chants. #ReclaimAustralia #noroomforracism pic.twitter.com/4JfFWcMu5q

“Claiming to be a patriot is one thing and being too patriot is another. We [Muslims] are a two percent minority here, so to say that radical Islam is taking over Australia is completely false, there’s no reality to it,” Waseem Razvi, the President of Australia’s Islamic Research and Education Academy, told RT.

One of the organizers of the anti-racist demonstration, Mel Gregson, told RT that both Australia’s major parties use the Islamophobic rhetoric in order to “demonize refugees, and to justify the invasion of countries of the Middle East, to basically destruct people and use Muslims as scapegoats.”

“What we’re doing today is stopping the growth and the rise of this movement (Reclaim Australia) that is attempting to essentially build a far-right neo-Nazi movement on the back of the racism and Islamophobia of the government,” she told RT.

Both sides are scheduled to hold more rallies over the weekend.