Amid gunfire, Mohamud Hagi Ibrahim jumped from a fourth-floor hotel window in Mogadishu, Somalia, to escape an attack by the militant group al-Shabaab. Today, still bearing injuries suffered in the fall, he’s back on a Toronto-area soccer field, coaching the sport he believes can change the world.

Ibrahim — or Coach Khalif to his players — is both a coach and mentor to a team of Somali players competing in the Metro Toronto Soccer Association that he founded in 1990. His players have praised him for not only teaching them the game, but keeping them in school and out of trouble.

But after successfully starting the team, Ibrahim was asked to return to Somalia to coach a team. Despite the political unrest and deadly presence of al-Shabaab, he agreed.

Ibrahim, who was a high-level player in Somalia during his youth before turning to coaching, led Benadir Football Club, a local team in the national capital of Mogadishu. 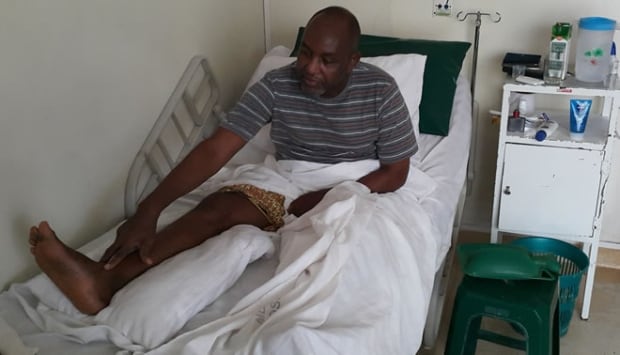 A jump from a hotel window during a militant attack in Mogadishu, Somalia, left Coach Khalifani with broken bones. The Somali-Canadian coach recovered from his injuries in a hospital bed in Nairobi, Kenya. (hiiraan.ca)

His plan was to inspire young men with sport to keep them from turning to al-Shabaab. On the field, his players won several tournaments, and he also headed the football and arts department for Somalia’s national police force. His program helped to shield some children from the influence of al-Shabaab.

On March 27, Ibrahim experienced what he was up against. The hotel he was staying at, Maka Almukarrama, was attacked by militants from al-Shabaab.

A reported 15 people died in the attack.

Ibrahim escaped by leaping from the window moments before militants broke into his hotel room. He survived the jump and was able to make his way to safety, but broke his femur, hip and foot.

He recovered in a hotel room in Nairobi, Kenya, where he received a visit from the Canadian ambassador to Kenya, David Angell.

It would take a $20,000 fundraising effort to pay for Ibrahim’s medical care and get him back to Toronto. He arrived at Pearson International Airport in a stretcher earlier this summer.

Today, he’s still watching the action from a wheelchair, but Ibrahim said he’s doing everything he can to get back out on the field.

“Telling is not enough. You have to show,” he said, with a smile.