One of Sundar Pichai’s clearest memories of growing up in Chennai, India, involves picking up the results of a blood test for one of his parents. It was the early 1980s, and though the family lived in a middle-class neighborhood, they didn’t have a telephone, automobile or television. There was no way to get the results other than to retrieve them in person.

Pichai had to take a city bus two and a half hours across town to the hospital and wait in a long line. When the results weren’t ready, he returned home empty-handed. In the U.S., “technology happens so fast, change is more continuous for people and sometimes they don’t internalize it,” he said in a Bloomberg Businessweek interview in 2014. “For me, it happened in these discrete moments.”

“In the technology industry, where revolutionary ideas drive the next big growth areas, you need to be a bit uncomfortable to stay relevant”

From that relatively hard-scrabble upbringing (his family got around by piling onto a Lambretta scooter,) Pichai attended the Indian Institute of Technology, won a scholarship to Stanford University, worked at the early Silicon Valley blue chip Applied Materials Inc. and joined Google Inc. as a product manager working on the toolbar, an important early window into Google’s services that appeared on the top of Web browsers like Internet Explorer.

That was 10 years ago. On Monday, Pichai, 43, was tapped to be chief executive officer of Google itself, the dominant unit of the new holding company Alphabet Inc., a stunningly rapid ascent to the top echelon of U.S. business. Now comes the hard part. His new role will be about positioning Google for the future, which hands him some of the toughest jobs in all of tech — like shifting the profit engine from the desktop to mobile and combating the rapid growth of Amazon.com Inc. in e-commerce and cloud computing and Facebook Inc. in social networking.

“The challenge is how to sustain revenue growth and profit enhancement in the face of slowing search growth,” said Brian Wieser, a senior research analyst at Pivotal Research Group LLC. “When you are 90 percent of the market, it’s hard to get much bigger.”

The promotion announced Monday was the latest for an Indian-born executive in technology, with Satya Nadella named CEO of Microsoft Corp. in 2014 and George Kurian appointed CEO of storage company NetApp Inc. in June. Kurian’s twin brother Thomas Kurian is president of product development at Oracle Corp., while Shantanu Narayen is CEO of Adobe Systems Inc.

Pichai’s rise says a lot about the newly globalized world, the spread of productivity enhancing technology and the way Larry Page sees the future of the company he co-founded. The new structure allows Page and his co-founder, Sergey Brin, to focus on the moonshots, like life-saving technologies at Calico and Internet-spreading gadgets at the Google X division.

Never one to embrace the formal duties of running a tech giant, Page prefers to look beyond the pillars in front of him, so he can position Google for the future. That has led him to gradually hand off more duties to his most trusted lieutenants.

“In the technology industry, where revolutionary ideas drive the next big growth areas, you need to be a bit uncomfortable to stay relevant,” Page wrote in a blog post. 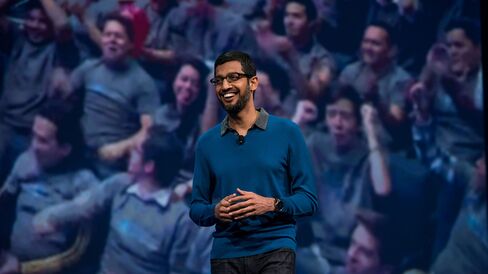 Over the past few years, no lieutenant has been as trusted as Pichai. He launched the Chrome browser, took over the Android operating system and, barely a year later, all of Google consumer products, save for YouTube. In the process, Pichai proved himself an effective product manager who shipped on time and a peacemaker inside Google and with partners like telcos and media companies. He also demonstrated an encyclopedic knowledge of Google’s products and businesses. “He’s basically committed to memory almost every statistical fact about Google and can extract details about those facts,” said Alan Eustace, a former Google senior executive, last year.

Pichai’s father, R.S. Pichai, a retired engineer who once oversaw the factory floor for a company that made electrical relays, said he used to speak with his older son about his job and its challenges. “Even at a young age,” the father said in an e-mail last year, “he was curious about my work, and I think that really attracted him to technology.”

In Sundar’s senior year of high school, he competed in the National Talent Search Examination (which included tests in mathematics and science) and received a scholarship awarded to only 750 students nationally. He got a coveted spot at IIT, but the family’s true sacrifice came when he won the scholarship to Stanford in 1993.

While the senior Pichai remembers making careful preparations to furnish Sundar with the 25,000 rupee for airfare, plus additional expenses for living, his son recalls that his parents basically ransacked their bank account to send him to the U.S.

In the U.S. for the first time, Pichai immediately commented that the fields looked remarkably brown (“‘no, they’re golden’”, he said his host family corrected him) and started missing his girlfriend Anjali, back home (she’s now his wife and mother of their two kids.) At Stanford, he got unfettered access to computers, and to the Internet, for the first time. The rest is history.

He talked last year about the necessity of making dramatic changes in life, and in business. “I believe we have clear momentum but the ground underneath is constantly shifting and evolving,” he said. “Either you adapt, and you are at the forefront and you drive this. Or someone else takes it over.”