QUEUES at the pumps were only a few minutes longer than usual. There was little evidence of stockpiling. Aside from minor grumbling, July 31st passed like any other Friday in the United Arab Emirates. But the following day, petrol prices rose by almost 30%, to something close to their market value. 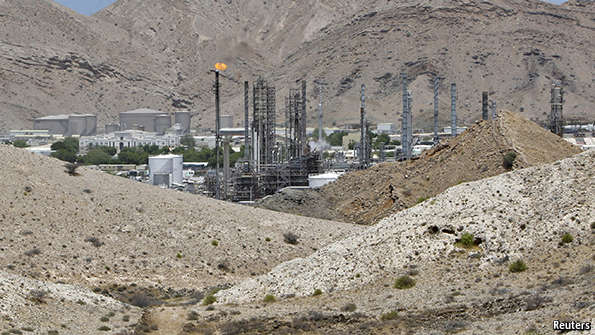 The relaxing of fuel subsidies—which in 2013 cost the government some $7 billion—puts the UAE at the vanguard of a long delayed reckoning in the Gulf. With falling global oil prices, the Arab Gulf states will miss out on an estimated $380 billion in export earnings this year, the International Monetary Fund estimates. Only Kuwait and Qatar will scrape by without a budget deficit, and all the region’s petrol states are being forced to look at cost-cutting.

What makes the UAE unique is its audacity in tackling the commodity many residents in oil-rich states see as their birth right: cheap petrol. The reforms, announced a week ahead of time, have pushed the price of their petrol to the highest level in the Gulf. In the next-highest, Oman, it is only about half as dear. The UAE’s prices are not completely deregulated; they will be set monthly by a committee based on international prices. But August’s price is only 13 cents below the American retail price.

How can the Emirates get away with changes that make other Gulf monarchies shiver? For one thing, much of the burden will fall on expatriates, who make up nearly 90% of the population. Their complaining would only be a problem if they sought better conditions and moved elsewhere.

But there are few better options to be had. With much of the region in turmoil, Middle Eastern and North African youth have named the UAE as the most popular place to work for each of the past four years, according to the Arab Youth Survey. Even for Western workers, Dubai’s streets seem paved with gold; the consultancy Mercer recently found the city was the most-searched international destination for American job-seekers.

Emirati nationals, meanwhile, continue to benefit from a generous welfare state that assists them with everything, from education and health care to housing and even the cost of marriage. Many local supporters of the new fuel price point out on social media that the rise has been offset by public-sector wage increases in previous years. (Four out of five Emirati workers are employed by the government.) “It’s a wealthy population, and even after the fuel prices rise, petrol is still not a big part of household budgets,” says Robin Mills, head of consulting at the Dubai-based Manaar Energy Group.

Fellow Gulf states do not face such a rosy picture; the few who have tried to raise tariffs have faced public uproar. In the days following the UAE’s announcement, Kuwaiti and Qatari authorities quickly quashed rumours that they too would cut subsidies. Kuwait’s government tried to raise diesel and kerosene prices in January, only to walk back the measure halfway after a public outcry. Oman and Bahrain have raised natural-gas tariffs for industrial users this year. But in an attempt to minimise unrest, Oman’s “strategy seems to be that subsidy reform would be focused toward industrial and commercial users first and individuals last,” says Prasad Ananthakrishnan, the IMF’s mission chief for Kuwait and Oman.

Unwilling to cut government spending, Saudi Arabia has already drawn some 244 billion riyals ($65 billion) from its reserves to cover spending in the first six months of the year. The government has also issued its first bonds since 2007. The country spends the equivalent of 8.3% of its GDP on fuel subsidies. Economists hope the UAE’s move will embolden other regional authorities. Now is the time; with oil prices low, cutting subsidies won’t hurt nearly as much as it would if oil still hovered over $100 per barrel.