SomTribune
Home Social Issues Health The toll of a tragedy: Ebola in Graphics 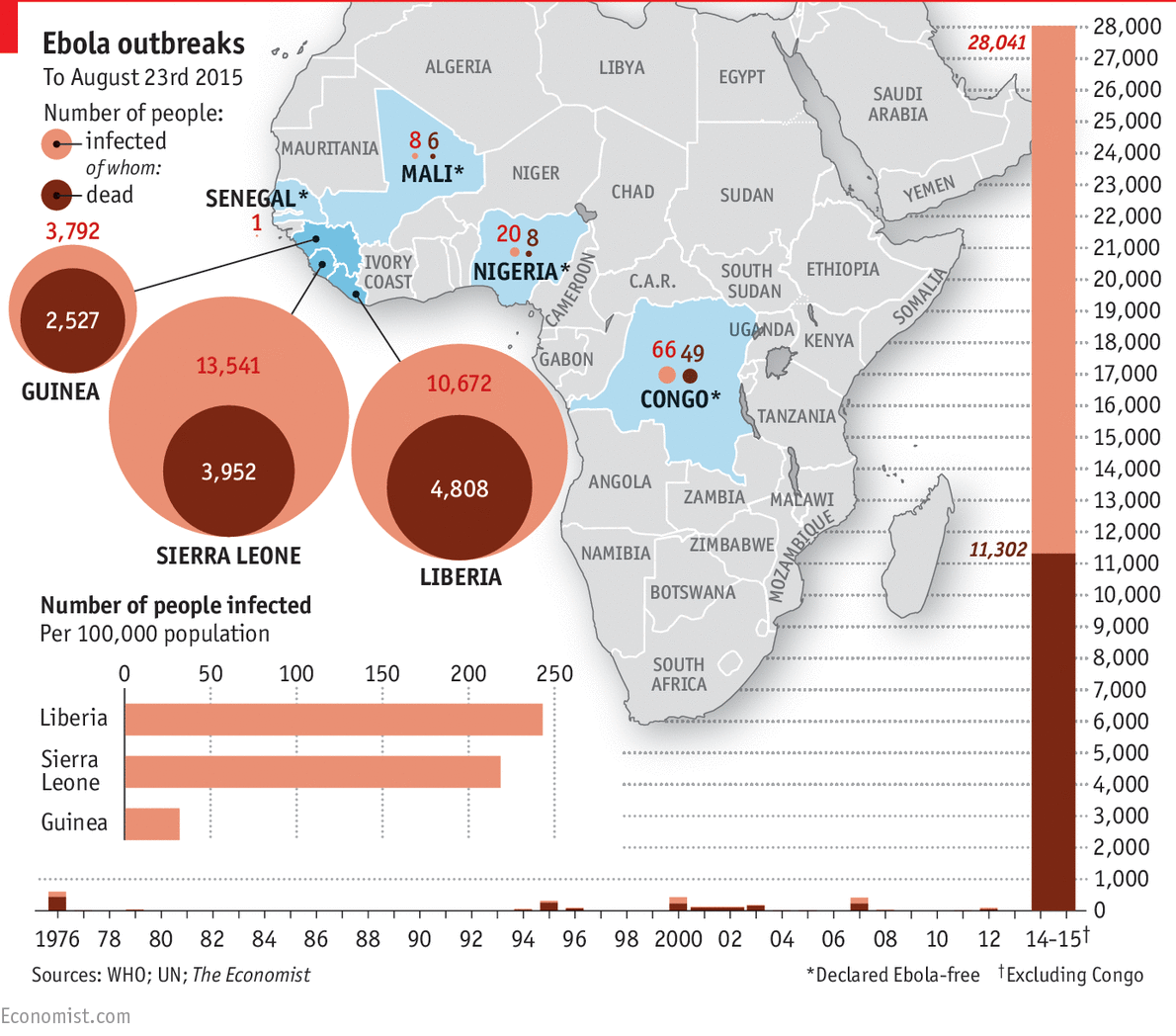 THE first reported case in the Ebola outbreak that has ravaged west Africa dates back to December 2013, in Guéckédou, a forested area of Guinea near the border with Liberia and Sierra Leone. Travellers took it across the border: by late March, Liberia had reported eight suspected cases and Sierra Leone six. By the end of June 759 people had been infected and 467 people had died from the disease, making this the worst ever Ebola outbreak. As of August 23rd 2015, 28,041 cases and 11,302 deaths had been reported worldwide, the vast majority of them in these same three countries. 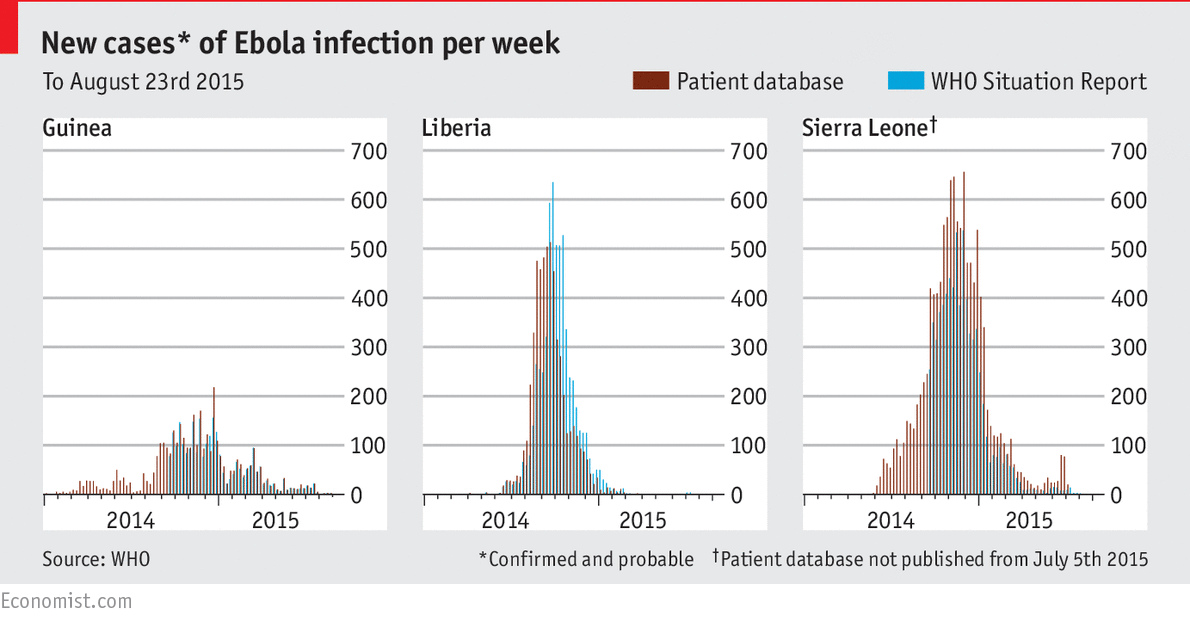 The outbreak continues to claim lives, though the casualty rate has abated this year. Liberia was declared Ebola-free on May 9th this year, but routine surveillance detected a new case on June 29th infected from an unknown source. Both Liberia and Sierra Leone have not recorded any new cases since July, while Guinea has held steady during August with three confirmed cases per week. The World Health Organisation reports that each country now has enough treatment beds to be able to isolate and treat patients with Ebola, and to bury everyone known to have died of the disease. The chart above shows numbers from both the WHO’s regular situation reports and from patient databases, which tend to be more accurate but are less complete for recent weeks.

The rate at which cases give rise to subsequent cases, which epidemiologists call R0, is the key variable in the spread of Ebola. For easily transmitted diseases R0 can be high; for measles it is 18. Ebola is much harder to catch: estimates of R0 in different parts of the outbreak range from 1.5 to 2.2. Any R0 above 1 is bad news. The very high mortality rate of the disease, estimated at around 60% in this outbreak, means that Ebola can quickly claim more lives than other, more established killers. 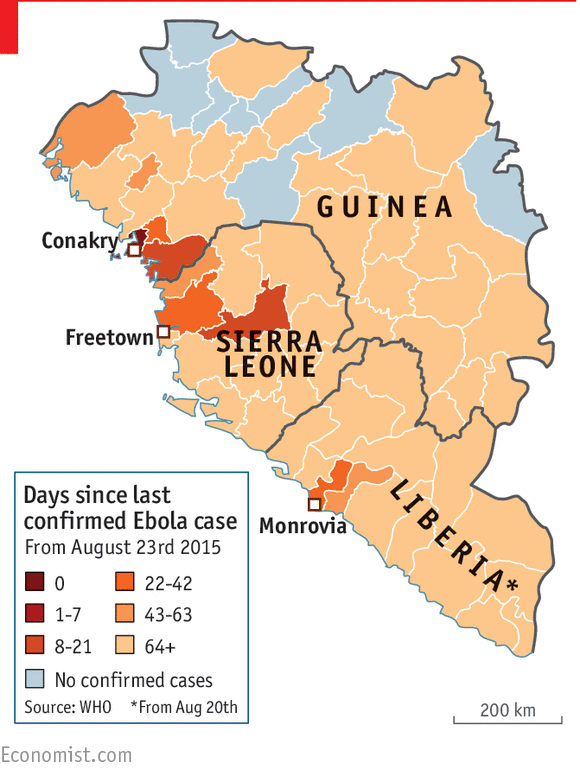 Many of the regions in the three most affected countries are now seeing a slowdown in the number of infections. Liberia hasn’t has a confirmed case since July. Sierra Leone also had no new cases in the week to August 23rd, the country’s second consecutive week without a case. Guinea, however, confirmed three new cases in the week to August 23rd, all in the Ratoma area of the capital, Conakry. The map on the left shows the number of days since the last confirmed infection by region for each country.

The inadequacies of the health-care systems in the three most-affected countries help to explain how the Ebola outbreak got this far. Spain spends over $3,000 per person at purchasing-power parity on health care; for Sierra Leone, the figure is just under $300. The United States has 245 doctors per 100,000 people; Guinea has ten. The particular vulnerability of health-care workers to Ebola is therefore doubly tragic: as of August 23rd there had been 881 cases among medical staff in the three west African countries, and 512 deaths.