Chelsea attempted to beat Manchester United to the signing of French teenager Anthony Martial from Monaco and were prepared to match the record £36.7m fee paid for the 19-year-old. (Sunday Times – subscription required)

Manchester City have also tried to sign Martial in the past, with the France international having had a tour of the Etihad when he was 11. (Sun on Sunday – subscription required) 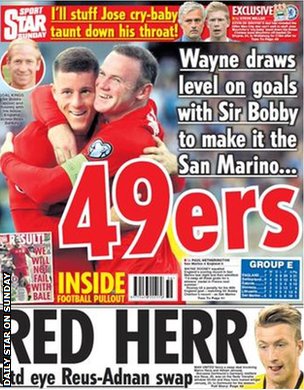 Daily Star on Sunday back page

Manchester United have told Spain goalkeeper David De Gea, 24, he will not be joining Real Madrid in January and will be forced to see out the remainder of his contract. (Sunday Mirror)

Real Madrid’s Wales forward Gareth Bale, 26, is United’s top target next summer and there is also a growing belief at Old Trafford that Cristiano Ronaldo, 30, could make a return to the club. (Sunday Mirror)

Liverpool’s Belgium striker Christian Benteke, 24, is using the mind coach who first guided his career to help him deal with the challenge of his £32.5m move from Aston Villa. (Sunday Mirror)

Real Madrid president Florentino Perez says he wanted Rafael Benitez to take charge of the club in 2009, but the Spaniard turned them down to stay at Liverpool. (Liverpool Echo)

Chris Coleman has hinted he wants to take Wales to the World Cup in 2018 and his Football Association of Wales bosses are willing to give him the chance . (Wales Online)

Coleman has welcomed calls for Wales to face England before Euro 2016 in a ‘Best of British’ match. (Mail on Sunday)

Real Madrid’s Portugal forward Cristiano Ronaldo is the world’s most valuable sports star on Twitter with sponsors paying an average of £169,280 for each post to his 37.7 million followers. (Mail on Sunday)

Former England striker Michael Owen was disappointed that Wayne Rooney was denied the chance to beat England’s goalscoring record when he was substituted after 58 minutes of the 6-0 victory against San Marino. He tweeted:  “Nooooo! Roy, don’t bring him off!”

However, international team-mate Harry Kane, who also scored against San Marino, has backed Rooney to set a new England goalscoring benchmark against Switzerland on Tuesday. “Delighted to get the goal and most importantly qualify for the Euros! Well done to @WayneRooney Hopefully break the record on Tuesday night!” he tweeted.

Former Leeds United captain Lucas Radebe posted a message on the anniversary of his signing for the West Yorkshire club. Hetweeted:  “21 years ago today I signed for @LUFC. Turn back the clock, and I would do the same thing again. #MOT”

A Norwegian couple love Liverpool so much that they have called their daughter ‘YNWA’ after the abbreviation for the club’s anthem You’ll Never Walk Alone. (Metro)

Rapper and actor Lethal Bizzle has accused Arsenal boss Arsene Wenger of being “stubborn” and he “could be counting his days” at the Gunners after failing to buy an outfield player in the transfer window.(Talksport)