SomTribune
Home Somaliland Somaliland Notes: Somaliland’s Version of the Act of Union with Somalia in... 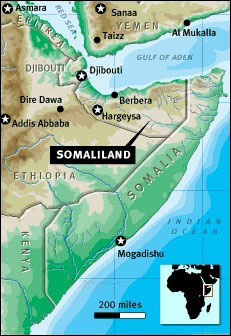 LAW OF UNION BETWEEN SOMALILAND AND SOMALIA:

Prior to attaining independence on 26 June 1960, Somaliland was very much interested in pursuing the dream of a Greater Somali State encompassing all the five territories inhabited by people of Somali ethnic origin.  After discussions in 1960, Representatives of Somaliland and Somalia agreed that an Act of Union will be signed by both states on independence and that this document will be in the nature of an international agreement between the two states. The Legislative Assembly of the independent STATE OF SOMALILAND therefore signed the Union of Somaliland and Somalia Law  (set out below) on 27 June 1960.  The Law was immediately effective in Somaliland, but as set out in the recital, it was supposed to be signed by the representatives of Somalia, as well. In fact, this never happened.  Instead the Legislative Assembly of theSomalia Trust Territory met on 30 June 1960 and decided to approve “in principle” an Act of Union (Atto di Unioni), which was significantly different from this Act of Union.   According to Contini, (The Somali Republic: An Experiment in Legal Integration, Frank Cass & Co. Lt 1969: London), the Assembly requested the “Government of Somalia to establish with the Government of Somaliland a definitive single text of the Act of Union, to be submitted to the National Assembly for approval”.

What happened instead was that on the morning 1st July 1960, the members of the Somaliland Legislative and those of the Somalia Legislative met in a joint session and the Constitution which was drafted in Somalia was accepted on the basis of an acclamation, with no discussion,  and a Provisional President was elected. This step was taken whilst relying on an additional clause inserted on 18 June 1960 in the draft Constitution to the effect that

“immediately after the signing the Act of Union of the two Somali Territories (Somalia and Somaliland), the new National Assembly shall elect … a Provisional President of the Republic…”

Presaging what was to happen again and again in the relationship between Somaliland and Somalia, the newly elected Provisional President than issued on the same day a decree law aiming to formalise the union, but even that was never converted into Law as presidential decree laws always required to be presented  to the National Assembly for conversion into Law under Article 63(3) of the new Constitution within five days of their publication, otherwise they “shall cease to have effect ab initio” i.e from their date of issue.   In any case, the reality was that there were two different versions of the same “law”.

Thus, although the clear plan and agreement between Somaliland and Somalia was that the same Act of Union will be signed by both states, the legal formalities, as agreed, were not completed properly and, according to Contini,

“ the Union of Somaliland and Somalia Law did not have any legal validity in the South (Somalia) and the approval “in principle” of the Atto diUnione was not sufficient to make it legally binding in that territory.”

Cotran [(1968)12 ICLQ 1010] comments that the legal validity of the legislative instruments establishing the union were “questionable” and he summarises the reasons as follows:

“a) The Union of Somaliland and Somalia Law, and the Somalia Act of Union were both drafted in the form of bilateral agreements, but neither of them was signed by the representatives of the two territories.

It was only on 18 January 1961 when a new Act of Union was put to the National Assembly, and was promulgated on 31 January 1961. This Law entitled the “Act of Union”  was made retrospective even though there is a generally accepted principle that laws should not be retroactive. The new Act of Union was different from the one signed by the Somaliland Legislature and re-produced below. The Law of Union passed by the Somaliland Legislature contained some guarantees about the laws applicable in Somaliland, the rights of Somaliland serving officers, which should not become less favourable than was applicable to them at the time of the union, the establishment of a special Commission on laws and its composition etc.  These were, in hindsight,  the only,  rather half hearted, demands that the Somaliland made at the time of the union.  But the 1961 retrospective Act was very clear in repealing anything which was inconsistent with the 1960 Somalia Constitution, and specifically repealed “the provisions of the Union of Somaliland and Somalia (Law No.1 of 1960)” except for Article 11(4) which, as you can see below relates to agreements entered into by the independent State of Somaliland (see Article 9(2) of the 1961 Act of Union).

This was a clear indication that Somaliland was an independent state with a Government of its own, however short that period was, and under Article 11(4) of the 1961 Act of Union, it was again confirmed that

“all rights lawfully vested in or obligations lawfully incurred by the independent Governments of Somaliland and Somalia … shall be deemed to have been transferred to and accepted by the Somali Republic upon its establishment”.

What this confirms again is that there was a union of two states, but more importantly, that Somaliland was an independent state before the union and has entered into treaties with Great Britain during that period.  This is of considerable legal significance because so many people, specially in Africa, still think of Somaliland as a region seceding from the now defunct Somali (Democratic) Republic rather than a former independent state withdrawing, albeit unilaterally, from a union of two states – a position which is currently unique in Africa as there is no other territory or even region in a similar position.

Finally, no one is contesting that the independent State of Somaliland and its people sought to unite with Somalia on 1 July 1960, and Somalilanders are still counting the cost of that precipitate decision. But the issue is that the way the legal formalities of this voluntary union were dealt with and how the Constitution was drafted for Somalia (and not Somaliland) were early harbingers of the tragedy that was to follow, because even the Act of Union formula of a Republic Legislative consisting of the Somaliland Legislative Assembly (of 33) and Somalia’s Legislative Assembly (of 90) was jettisoned a few years later.

LAW OF UNION BETWEEN SOMALILAND AND SOMALIA:  Law No: 1 of 1960 –  Passed by the Independent State of Somaliland Legislature on 27 JUNE 1960

Whereas the State of Somaliland achieved independence and ceased to be under British  protection or within the jurisdiction and sovereignty of Her Britannic Majesty on the 26th day  of June, 1960, being Muharram 1st 1379, and Whereas  the State of Somalia achieved its independence and ceased to have the status of a Trust Territory of  the United Nations Organisation administered by the  Republic of Italy on the 1st day of July, 1960,  being Muharram 6th 1379, and Whereas it is the will  of the peoples of Somaliland and Somalia that their  States shall unite and shall forever be united in the Somali Republic.

Now we the signatories hereof being the duly authorized representatives of the  peoples of Somaliland and Somalia and having vested in us the power to make and enter into this Law of Union on behalf of our respective States and peoples do hereby solemnly and in the name of God the Compassionate and Merciful agree as follows:

(3)        The members of the Council of Ministers after being appointed in accordance with the Constitution shall each make an oath of allegiance to the Somali Republic before the President of the National Assembly.

(2)        Notwithstanding anything in clause 2 hereof there shall be no customs, excise or other tax imposed upon the movement of goods (including animals) between any parts of the territory of the Somali Republic, providing such goods originate from the Region from which they are proceeding.

(3)        The Special Commission shall examine into and make recommendations (which in the event of the Commission not being unanimous shall be the recommendations of a majority of its members to which a minority report shall be attached) as to the provisions to be made from time to time by law for the purpose of establishing uniformity between the laws, institutions, public services and social services presently existing in the regions referred to in clause 2 (1) hereof.
(4)        The Special Commission shall for the aforesaid purposes be empowered to establish sub-commissions or committees, the members whereof may include other persons, and to engage or call for assistance from any person by way of advice or otherwise.

(5)        A Special Commission shall from time to time report to the Council of Ministers as to its recommendations under sub-clause (3) of this Clause and the Council of Ministers shall thereupon with all reasonable dispatch lay such report before the National Assembly together with the proposed legislation to be made to give effect thereto.
(6)        The National Assembly shall thereupon decide by a majority of the members thereof present and voting upon such proposed legislation whether the same shall be enacted.
(7)         Upon the National Assembly so deciding then the President shall assent to such legislation and upon the same coming into operation any condition set forth in clause 2 hereof shall so far as it is inconsistent with such legislation be abrogated.

(3)        For the purposes of the preceding sub-clause, any property which immediately before the making of this Act of Union was vested in, or any liability or obligation which at that time had been incurred by, any person or authority on behalf of the Government of Somaliland the State of Somalia   shall be deemed to be property vested in or a liability or obligation incurred by the respective Government or State.

(3)        The Supreme Court of the Somali Republic shall have appellate jurisdiction in relation to decisions of the Courts
now constituted and which will continue to subsist in the aforesaid Northern Region.

This was the 22nd posting of a reproduction of a series of historical  notes, articles, tracts and academic discourses to mark proud landmarks in the history of Somaliland from 1884 which highlight events leading to the country’s two independences of 1960 & 1991.