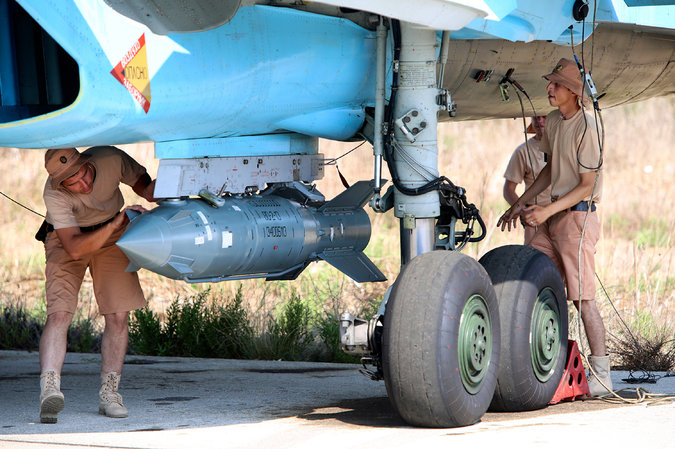 Ratcheting up the confrontation over the Syria war, Russiasaid Monday that its “volunteer” ground forces would join the fight, andNATO warned the Kremlin after at least one Russian warplane trespassed into Turkey’s airspace.

The saber-rattling on both sides reflected a dangerous new big-power entanglement in the war, as longstanding differences between Russia and the United States over President Bashar al-Assad of Syria and his opponents increasingly play out not only in the halls of the United Nations but on the battlefield in Syria.

Russia squared off with Turkey and its NATO allies, calling the air incursion on Saturday an innocent mistake because of foul weather — a claim American officials rejected.

News services said late Monday that a second airspace violation might have been committed on Sunday, but that report could not be immediately confirmed.

A Russian ground force could fundamentally alter the conflict, which has left 250,000 people dead and displaced half the country’s population since it started in 2011.

Although President Vladimir V. Putin of Russia said he would not put troops in Syria, the plan for so-called volunteers was disclosed Monday by his top military liaison to the Parliament, Adm. Vladimir Komoyedov. It seemed similar to Russia’s stealth tactic in using soldiers to seize Crimea from Ukraine in March of 2014 and to aid pro-Moscow rebels in eastern Ukraine.

Moreover, American military officials said they believed that more than 600 Russian military personnel were already on the ground in Syria, not counting aircrews, and that tents for nearly 2,000 people had been seen at Russia’s air base near Latakia, in northwest Syria near the Turkish border.

Russia intensified the airstrikes it began in Syria last week, with new attacks on territory near Palmyra that is indisputably held by the Islamic State. But Russian targets remain a matter of deep contention.

Russian officials say they are targeting the Islamic State, though their bombs have mainly hit territories held by other insurgents who oppose Mr. Assad, Russia’s ally. The strikes have hit the Army of Conquest, an Islamist faction that includes the Nusra Front, Al Qaeda’s Syrian affiliate, as well as more-secular groups that often fight alongside it, including some that have received covert American aid.

The Obama administration, by contrast, says its own airstrikes against theIslamic State in Iraq and Syria can succeed only with a political transition that ends with Mr. Assad’s removal.

The administration’s position was ridiculed Monday by Sergey V. Lavrov, Russia’s foreign minister, who said the American airstrikes, which began more than a year ago, had done little militarily. In comments carried by Russia’s official Tass news agency, Mr. Lavrov said that even the Americans had acknowledged their faltering efforts to create a force of so-called moderate insurgents in Syria.

“Nobody knows about these people,” he said. “Nobody’s really heard about the moderate opposition.”

Foreign Minister Mohammad Javad Zarif of Iran, Mr. Assad’s regional ally, was also dismissive of the American efforts in Syria, both to unseat Mr. Assad and to combat the Islamic State. Sounding emboldened by the Russian airstrikes, Mr. Zarif said at a talk in New York that there was a difference between Russia — which was invited by Mr. Assad to help — and the American-led coalition that has been bombing Syria. “Why are you there?” he said. “Who gave you the right to be there?”

The Russian disclosure that so-called volunteer forces might soon be in Syria fueled speculation of an impending ground offensive against insurgents, one that would involve unprecedented coordination among Mr. Assad’s allies.

It could include Syria’s army fortified by forces from Russia, Iran and the Lebanese militia Hezbollah, which has deployed fighters in Syria for years to help Mr. Assad. Likely targets are Army of Conquest insurgents who threaten Mr. Assad’s coastal strongholds from territory they have seized in Idlib Province, in the north.

After the Turkish airspace incident — which, at least in theory, could have escalated into a confrontation between Russia and NATO — an Obama administration official called Russia’s behavior “deliberately provocative,” while Admiral Komoyedov said his country’s “volunteers” on the way to Syria “cannot be stopped.”

As the global powers postured, gaps deepened between local and regional participants in the war, and predictions that the Russian action would strengthen radicals in the Syrian insurgency appeared to be accurate.

Insurgent groups opposing both Mr. Assad and the Islamic State, including some supported by the Americans, declared that they would no longer participate in any peace process sponsored by Russia, which they accused of occupying their country. Some vowed to work more closely with the Nusra Front.

Forty-one insurgent factions said in a statement that Russia’s “brutal occupation has cut the road to any political solution,” the latest challenge to diplomatic efforts by a special United Nations envoy, Staffan de Mistura.

Separately, in a statement laden with sectarian language, a group of prominent Saudi Arabian clerics called on Muslim and Arab countries to support a jihad, or holy war, against Mr. Assad and his Russian and Iranian patrons — even comparing the Syrian war to the Soviet Union’s invasion of Afghanistan in the 1980s and the jihad against it that drew fighters from around the world.

The statement followed a declaration from the head of the Russian Orthodox Church, Patriarch Kirill, blessing the Russian fight in Syria.

Even the Islamic State, which appeared to be a minor participant in the events of the past week, sought to remind the outside world of its presence, destroying more antiquities. Syrian officials and local activists confirmed that Islamic State demolitionists had wrecked a renowned triple arch at the beginning of a Roman colonnade at the ancient city of Palmyra.

The Russian air offensive turned on Monday to that area, the oasis town of Tadmur and the adjacent ruins of Palmyra, a symbolically important site for the global outrage over the Islamic State’s policy of desecrating archaeological treasures.

A spokesman for the Russian operation, Maj. Gen. Igor Konashenkov, said at a briefing in Moscow that a pair of Su-25 fighter bombers had attacked Islamic State armored vehicles near Tadmur, destroying 20 tanks, three rocket launchers and an ammunition depot. The strike was among the 15 daytime sorties he said Russian pilots had flown.

The potential combination of Russian ground forces and aerial attacks particularly threatens to undermine Turkey’s Syria policy, which aims for the establishment of a “safe zone” along the Turkish border where some Syrian refugees could return in the future.

The Russian air incursion happened on Saturday, when Turkish fighter jets scrambled to intercept a warplane that trespassed into Turkish airspace. On Monday, NATO issued a warning to Russia, as the United States began urgent consultations with Turkey over what they called “next steps.”

Russia’s actions were “an unacceptable violation” of Turkish airspace, NATO’s secretary general, Jens Stoltenberg, said after meeting with the Turkish foreign minister, Feridun Sinirlioglu. Mr. Stoltenberg added, “Russia’s actions are not contributing to the security and stability of the region.”

The Turkish ministry summoned Russia’s ambassador to Ankara, the capital; demanded that the violation not recur; and said that Russia would be responsible for any further escalation, Turkish officials said.

“The steps Russia is taking and the bombing campaign in Syria are quite unacceptable to Turkey,” President Erdogan told reporters at the Istanbul airport on Sunday. “Unfortunately, Russia is making a grave mistake.”

Turkey and Russia have a strong bilateral relationship, but those relations have soured in recent months because of deep differences over Syria and the stalling of a pipeline project to carry Russian gas to Turkey.

Defense Secretary Ashton B. Carter, speaking in Madrid during a news conference with his Spanish counterpart, said American officials were conferring with Turkish authorities over the next steps.

The Russian military spokesman, General Konashenkov, said that the Russian jet’s pilot had mistakenly entered Turkish airspace in bad weather as the aircraft approached its base near Latakia, about 18 miles from the Turkish border.

A senior American official rejected the claim. “The pilot would have known where they were,” said the official, who spoke on the condition of anonymity because the official was not authorized to comment by name. “I’m not a fighter pilot, but there was no way this was accidental. The notion that this was accidental is far-fetched.”