Home World News/International Politics/Diplomacy After a U.S. Shift, Iran Has a Seat at Talks on War... 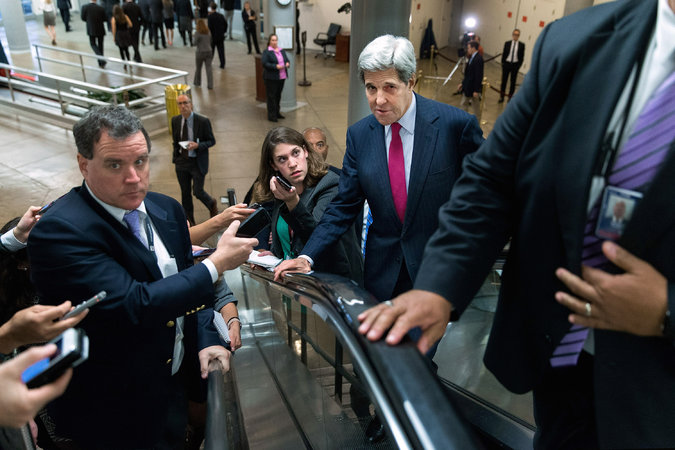 Iran on Wednesday accepted an invitation to attend a broad new round of negotiations to resolve the Syrian war, sitting with longtime adversaries including the United States and Saudi Arabia who once sought to bar the Iranians from any role in Syria’s future.

The inclusion of Iran in the talks represented the first time that the United States has chosen to formally engage the Iranians diplomatically on the Syria issue. It also came a little more than three months after Iran signed a historic nuclear accord with the United States and other powers that promised to end Iran’s economic isolation in return for limits on its nuclear enrichment, suggesting an effort to broaden the discussion beyond that successful negotiation.

Iran’s acceptance of the invitation to join the Syria talks in Vienna, an offer made by Russiaafter President Obama and Secretary of StateJohn Kerry dropped Washington’s past objections, reflected how rapidly the dynamics of the war have changed. Clearly worried about the military support that Russia and Iran are providing to prop up President Bashar al-Assad, the United States has concluded that the only hope for easing Mr. Assad from power is to find a political solution with his two sponsors.

But Iran’s participation also appeared to signal how Iran is emerging from decades of American-imposed marginalization. Only two years ago, it was disinvited from joining Syrian peace talks because of pressure from the United States. Now, with Iran’s enhanced standing in the aftermath of the nuclear agreement, Mr. Kerry appears to be testing whether a broader basis for cooperation is possible.

When Mr. Kerry arrives back in Vienna, where the nuclear accord was struck in July, he will be facing a familiar negotiating adversary: Mohammed Javad Zarif, the American-educated Iranian foreign minister with whom he negotiated the nuclear deal and established an unusually close relationship.

For Mr. Kerry, negotiating Iran’s role will be tricky. Russia and Iran are playing increasingly aggressive military roles in backing President Assad against an array of rebels, some supported by the United States and its Western and Arab allies including Saudi Arabia, Iran’s most powerful regional rival.

In a sign of the tensions that Iran’s participation could generate, Saudi Arabia reacted cautiously and suspiciously. “If they’re serious, we will know, and if they’re not serious, we will also know and stop wasting time with them,” the Saudi foreign minister, Adel al-Jubeiri, told reporters Wednesday at a Riyadh news conference with Britain’s visiting foreign secretary, Philip Hammond.

The Syria war, which began in March 2011, has killed a quarter-million people, contributed to the biggest refugee crisis since World War II and become a breeding ground for the Islamic State and other extremist groups that threaten not only Syria’s neighbors but all the powers supporting one side or the other.

The result has been a gradual but undeniable shift in American strategy. Top American officials who once rejected any outcome that maintained Mr. Assad in power have recently acknowledged that no serious discussion of a possible succession plan in Syria could occur unless Iran was involved. And the Iranians in public have said he is their “red line,” saying replacing Mr. Assad is out of the question — though in private, they have said they were open to a transition to another member of Mr. Assad’s Alawite sect, closely aligned to Iran’s Shia, if one emerged.

Iran’s decision to attend the Syria talks, which Iran’s news media announced Wednesday, also sent an ambiguous signal at home. Just a few weeks ago, Ayatollah Ali Khamenei said any new talks with the United States were forbidden. He described the United States as a persistent enemy of the Islamic revolution, and said that despite the nuclear agreement, it needed to be kept at a distance.

But participating in the multination Syria talks does not contradict Mr. Khamenei’s dictums, some Iranian analysts say.

“Our leader has banned the bilateral relations between Iran and America or any negotiation aimed at resuming relations,” said Hamidreza Taraghi, a political analyst in Tehran considered close to the ayatollah. “Case-by-case negotiations or finding solutions for regional problems on a multilateral basis is all right.”

So, while publicly siding with the hard-liners, the Supreme Leader may well be giving more negotiating room to President Hassan Rouhani, who has advocated more open engagements with the rest of the world. There has already been an unspoken cooperation between Iran and the United States in Iraq, where both are fighting the Islamic State.

“We should thank President Rouhani for his efforts in reaching out to the international community, and the nuclear deal,” said Farshad Ghorbanpour, a political analyst close to the government in Tehran. “Now we are seeing the rewards: We are playing an increasing active role in the international arena.”

That role is something that Iran has desperately sought: Diplomatic weight and respect that bolsters its claim that it, not Saudi Arabia, is the most influential power in the region. “It’s very important because it shows that, following the nuclear agreement, Iran is now ready to cooperate on crisis management in the Middle East,” Seyed Hossein Mousavian, a former Iranian diplomat and nuclear negotiator who now teaches at Princeton, said in a telephone interview. “I’m not surprised, because the leader had said that if the deal were done fairly, with face-saving for all parties, Iran would agree to next steps on other issues. This is a big step forward.”

Cliff Kupchan, an Iran specialist and chairman of the Eurasia Group, a Washington political consultancy, said that given Russia’s recent intervention in Syria to support Mr. Assad, it was clear he would remain in charge for a while, which meant Iran would be attending the Vienna talks from a position of strength.

Still, Mr. Kupchan said in an email, “as U.S.-Iran contacts spread to a broader array of issues, it will be harder and harder for Iranian conservatives to quarantine cooperation.”

The Vienna talks, which begin Thursday, will start with Russia and the United States, Britain, France, Germany, Egypt, Jordan, Qatar, Saudi Arabia, Turkey and the United Arab Emirates. Iran will join Friday; it is not clear if the Iranians and the Saudis will be in the same room at the same time. Just last month, Mr. Zarif said that “unfortunately, our Saudi neighbors are not prepared to discuss these issues with us.”

Mr. Zarif has made no secret of his disdain for the American strategy in Syria, suggesting there is not much of one. “What has the United States done to stop ISIS?” he asked at a public event with the University of Denver, his alma mater, in New York a month ago, referring to the Islamic State militant group.

The last round of talks in Vienna ended last Friday without a resolution, although Mr. Kerry and his Russian counterpart, Sergey V. Lavrov,emphasized common ground: their shared fight against the Islamic State and other violent extremist groups, and a desire to keep Syria as unified and for Syrians to decide the future of their country.

Iran’s participation in Syria talks is something United Nations mediators have sought for years — and faced opposition from the White House for just as long. The most notable moment came in January 2014, when Ban Ki-moon, the secretary-general, announced at a hastily called news conference that he had invited Iranian officials to take part in peace talks in Geneva. The Americans objected immediately, and by the next day, Mr. Ban backtracked. He told reporters that Iran was no longer invited.

Mr. Ban welcomed the news on Wednesday of Iran’s inclusion in the talks, his office said in a statement. “He has long felt Iran should have a role in discussions on Syria,” it said. “Countries that have influence over the Syrian parties need to be part of the discussion and, of course, this includes Iran.”

While Mr. Zarif played a central role in negotiating Iran’s nuclear deal, the extent of his influence over Iran’s policy on Syria is less clear. Gen. Qassim Suleimani, the commander of Iran’s paramilitary Quds Force, is widely assesses to have a considerable role in shaping Iran’s involvement in the war in Syria.

Iranian news media are now reporting deaths of Iranian “volunteers” in Syria on a daily basis, another reflection of Iran’s increased entanglement. On Wednesday, the Mehr news agency reported on the killing of Puya Izadi, a volunteer paramilitary from Isfahan province. The Fars news agency said an Iranian identified as Mehdi Ka’ini was killed by “terrorists in Syria.” But in line with the government’s ambiguity over its precise role in the conflict, Iranian news media never give details on how these Iranians are killed in Syria.