Gunmen stormed a Radisson Blu hotel on Friday morning in Bamako, the capital of the West African nation of Mali, seizing scores of hostages and killing at least three people.An unknown number of gunmen, perhaps four or five, had taken “about 100 hostages” at the beginning of the siege, said Gen. Didier Dacko of the Malian Army.

It was unclear how many hostages remained inside, he said, adding that soldiers had sealed the perimeter and were now “inside looking for the terrorists.”

Several dozen hostages, many of them crying – including women, children and older people – had begun streaming out of the hotel after hiding in their rooms, said Amadou Sidibé, a local reporter at the scene. Two members of the Malian security forces were wounded by shots fired from the seventh floor of the hotel, he added.

Col. Maj. Salif Traoré, the minister of security and civil protection, said the military had evacuated around 30 people from the hotel and taken them to a gymnasium nearby.

Northern Mali fell under the control of Islamist militants in 2012. A French-led offensive ousted them in 2013, but remnants of the group have staged a number of attacks on United Nations peacekeepers and Malian forces. Hundreds of French soldiers remain in the country.

The hotel is a popular place for foreigners to stay in Bamako, a city with a population approaching two million, and French and American citizens were among those taken hostage.

A diplomat at the Chinese embassy in Bamako said that eight Chinese business people had been trapped in the hotel as well. Embassy officials at the scene were in touch with some of the Chinese hostages by WeChat, a Chinese messaging service, the diplomat said.

Kassim Traoré, a Malian journalist who was in a building about 50 meters, or 160 feet, from the Radisson, said the attackers told hostages to recite a declaration of Muslim faith as a way separating Muslims from non-Muslims.

Those who could recite the declaration, the Shahada, were allowed to leave the hotel. The Shabab, al-Qaeda affiliate in East Africa, used a similar approach in the attack at the Westgate Mall in Nairobi in 2013. 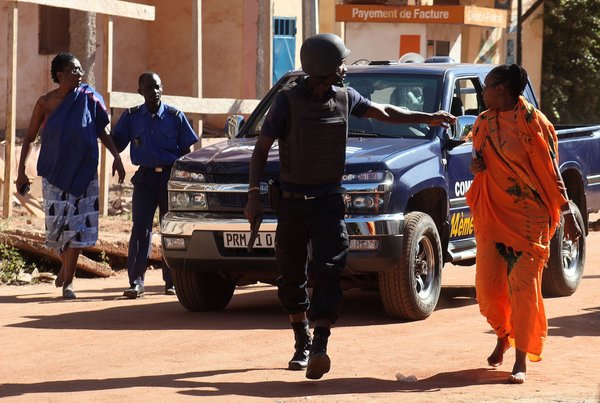 The security forces were moving through the hotel, floor by floor, freeing hostages as they went, Mr. Traoré added. The gunmen were holed up on the 7th floor, with the battle over the hotel still underway.

Some of the people who fled the hotel were not wearing any clothes as they were taken to a police station.

“We were just evacuated from the hotel by security forces, I know that there are a lot of people inside right now,” one hostage who made it to safety told France24 television. “I saw bodies in the lobby. What is happening right now is really horrible.”

“I was hidden in my room barely a couple minutes, a couple seconds ago and someone shouted, telling us to get out, my door was smashed open, the security forces arrived,” the hostage added.

Another French hostage, who did not want to be identified, told a friend in Bamako that a group of people was trapped on the roof of the hotel, along with the body of one person who had died in the attack. The hostage told the friend that the French consulate had told hostages by text message to stay put and wait for a military assault.

Kamissoko Lassine, the chief pastry chef of the Radisson Blu hotel in Bamako, said that two armed men arrived at the hotel between 7 a.m. and 7:30 a.m.

“They were driving a vehicle with diplomatic plates,” he said. “You know how easy that is at the hotel? The guardians just lifted the barrier.”

“They opened fire and wounded the guard at the front,” said Mr. Lassine, who said he was able to slip out a back door and make it home safely. “They took the hotel hostage and moved people into a big hall.”

A member of the United Nations peacekeeping force in Mali, who asked not to be identified, said there were many French people in the hotel, including Air France staff, along with a delegation for the International Organization of French Speakers. Air France later said in a statement that 12 members of its crew were at the hotel and were freed.

Five Turkish Airlines crew members, including pilots and flight attendants, have also been freed, while two remained inside the hotel, a Turkish government official said. 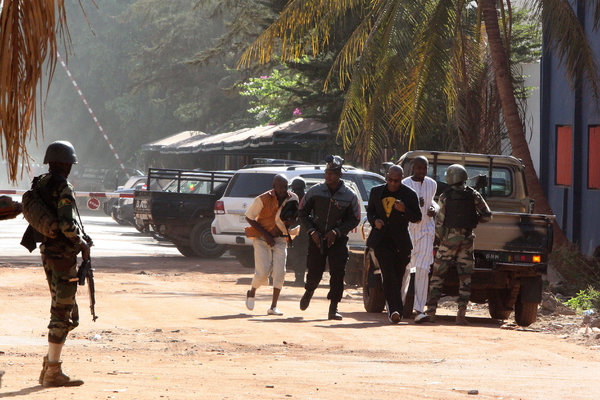 Fleeing from the Radisson Blu hotel in Bamako, Mali, on Friday after gunmen took scores of hostages. CreditHarouna Traore/Associated Press

Mali has been crippled by instability since January, 2012, when rebels and Al Qaeda-linked militants — armed with the remnants of late Libyan leader Col. Muammar el-Qaddafi’s arsenal — began advancing through the country’s vast desert in the north and capturing towns.

A military coup, stirred in part by anger over the government’s handling of the insurrection, overthrew Mali’s elected government in March 2012. Amid the chaos, Islamist rebels managed to consolidate their hold on the northern part of the country, imposing a harsh version of Islamic law.

In January of 2013, the Islamist forces began advancing south from their northern stronghold, heading in the direction of Mali’s capital. France sent in troops to stop them. A brief military campaign halted the Islamist advance, recaptured towns like Timbuktu that had been under the militants’ control, and chased the remaining Islamist fighters back into the desert.

But in a shocking twist, other militants linked to Al Qaeda stormed a vast gas production facility in the desert of neighboring Algeria, taking dozens of expatriate workers hostage. Some 38 were killed during the siege of the gas plant.

With hundreds of French troops still present in Mali and the country highly reliant on donors, elections in the summer of 2013 restored a democratic government. But its hold on the north remains weak.

There are frequent attacks by Islamist fighters, particular on United Nations troops, in the northern provinces. A shaky peace deal signed in June has not stopped the attacks, and in August five United Nations workers were killed in an assault on a hotel in central Mali. Five months before, militants killed five at a restaurant in Bamako.

The Rezidor Hotel Group, the operator of the Radisson Blu Hotel Bamako, said it was in contact with the local authorities, and the United States Embassy said it was aware of the situation and issued a warning to staff members and American citizens to shelter in place.

There was no formal claim of responsibility, but supporters of the Islamic State were posting on Twitter in celebration of the attacks under the hashtags #IslamicState, #ParisIsBurning and #Mali_Is_Burning.

In August, jihadists stormed a hotel in Sévaré, north of the capital, where United Nations staff members were staying, seizing hostages and killing at least five Malian soldiers and a United Nations contractor.