In a preview of the interview with the leader, to be aired fully on Sunday, Erdogan demanded that countries in the region come together to address this plot to stir sectarianism. 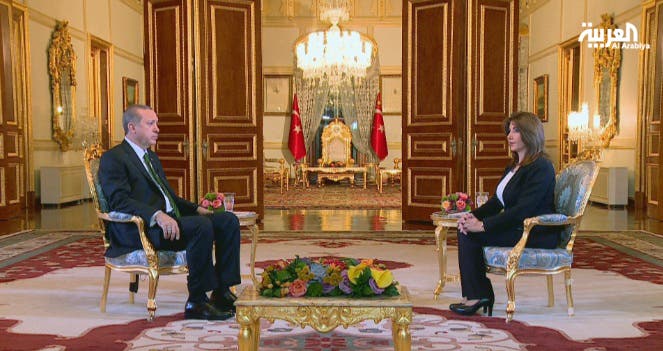 He said there were “disagreements” between Turkey and Iran over regional issues.

“There are disagreements between Turkey and Iran, but I do not want these disparities to affect good neighborly relations … sectarianism should not prompt us to become enemies, Islam must be our reference.

“There are intentions in the world to divide us and we need to join our efforts and come together. Look at what is happening in Iraq, Syria, Palestine and Libya … we have to overcome these problems and if we manage to do so, the Islamic world will be more powerful,” Erdogan added.

On the Iraq crisis, the president said that Turkish forces currently training Iraqis in the Bashiqa Camp near Mosul, came at the request and knowledge of Iraqi authorities. However, he did not say whether these stationed forces will withdraw.

“Iraqi-Turkish relations are good. We tackled developments in Iraq during [Iraqi Prime Minister] Haidar al-Abadi’s visit to Turkey,” he said.

“When ISIS entered Iraq, the Iraqis asked for our help and we told them we were ready. We asked them to assign a suitable site to set up our base and so they did. It all began at the end of last year, and in March, we were allocated the Bashiqa area.”

He added: “The Iraqi defense minister visited the training camp, but it seems that the developments in Syria have affected the situation in Iraq. Syria, Iran, Iraq and Russia have formed a quartet alliance in Baghdad and asked Turkey to join, but I told President [Vladimir] Putin that I cannot sit alongside a president whose legitimacy is distrustful.”