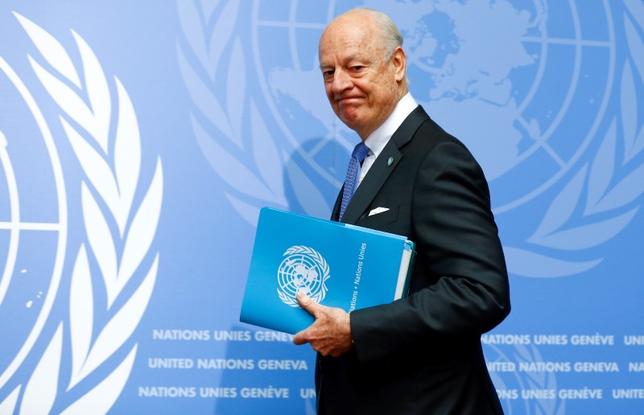 He told a news conference that a political transition was “the mother of all issues” and would be the focus of the talks.

Asked if he would like to see a woman as president, he told Reuters: “I would love that.”

His spokesman Ahmad Fawzi quickly added that the outcome of any election was entirely a matter for the Syrian people.

Opposing views on the fate of Syrian President Bashar al-Assad helped to wreck a previous round of peace talks in 2014, and undermined an attempt to forge a road map for peace in 2012.

The co-sponsors of the current talks, Russia and the United States, have opposing views whether Assad can continue as president after five years of war in which more than 250,000 people have been killed.

Syria, for its part, has shown no sign of shifting, especially since it is now in the ascendancy on the battlefield.

De Mistura has repeatedly said he wants to include more women in the peace process, and teased reporters on Monday by asking them to guess whom he had met first in the current round of peace talks.

After several wrong answers were shouted out, he said he had met the Syrian Women’s Advisory Group for almost an hour and a half on Sunday afternoon.

“They are those who I hope will be able to contribute more than ever before to at least our understanding on how to address the Syrian crisis,” de Mistura said.