In a ‘news’ story recently circulated in some websites and on one or two newspapers in Somaliland, it was purported that the incumbent Speaker of the Somaliland Lower House of Parliament, the House of Representatives, the Hon. Abdirahman M Abdullahi “Irro”, also,  the Chairman of one of Somaliland’s opposition parties – Waddani – met with the Honorable Foreign Minister of Kenya, Amina Mohamed, in Nairobi on April 13, during which meeting Irro ‘requested’  the Minister to open a representative diplomatic ‘Embassy’ in Hargeisa. 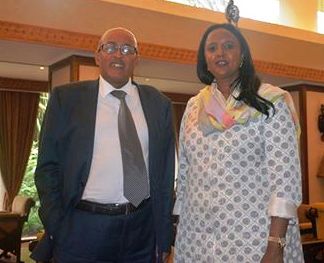 The report went  to a length to intimate that the Waddani Chairman, in his capacity as an opposition leader, initiated the move for the first time in the history of the two countries and that it was favorably received by the Minster.

This report was circulated, too, at a time when officials from the Ministry of Foreign Affairs of Kenya where in Hargeisa to iron out last details on the relocation of a fully-fledged diplomatic presence on the ground to further cement burgeoning cordial, mutually beneficial relations between the Republic of Kenya and the Republic of Somaliland defying the absence of an ‘international community recognition’ of Somaliland as a ‘sovereign’ state.

That a leader of an opposition party meets an official of another government is not a new phenomenon but that such a leader who, at the same time, is the leader of a legislative house of a nation misrepresents those meetings is not only a slur on his party and the Somaliland parliament but the whole nation.

Kenya has already a presence of sorts in Somaliland following its official announcement several years back – and reaffirmed in 2014 – that it will open a fully functioning diplomatic mission in the capital of the Republic of Somaliland, Hargeisa (see below).

The misrepresentation of the facts of the opposition leader’s meeting with the Hon. Amb. Amina Mohamed, the Kenyan Foreign Minister, where it happened, how it happened, what has been discussed, and the outcome as reported by Waddani is a blow to the diplomacy of Kenya – a country that is in the forefront of African diplomacy and correct political behavior.

If the meeting happened as Waddani  reports, then, Kenya has made the worst diplomatic blunder of the year – if not ever. Kenya was not expected not to know who to talk to when it came to the formal opening and the commencement of its diplomatic operations in Somaliland. Chairman Irro, surely, did not look like the ROS Foreign Minister, Dr. Sa’ad Ali Shirreh, nor the President of the republic, His Excellency, Ahmed Silanyo.

The Ambassador Minister must clarify the issue to her country and to Somaliland.

The Chairman, on the other hand, has other roles to play, other responsibilities to fulfill without trying to usurp what an elected government was mandated to do – if, indeed, that was the case.

Several other nations such as Ethiopia, Djibouti and Turkey have independent diplomatic missions open in Hargeisa.  Kenya was already present on the ground in a limited sort of way.