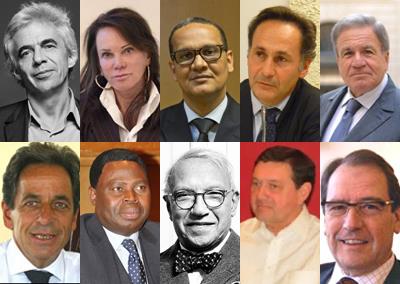 The generation of entrepreneurs and engineers who made their careers in Africa is disappearing but not the generation of lawyers acting for the presidencies of francophone African countries. That generation is still very much alive as is illustrated by this new Insiders special report from West Africa Newsletter. With media coverage, mouth-watering fees, direct contact with presidents, high profile cases and clients with little concern for cost…Africa is still for the stars of the bar an Eldorado where they discover state secrets and take charge of the destinies of the families of presidents and of countries.

Their presences owes a great deal to the language, institutions and common legal systems introduced by colonization but, law and spectacular cases apart, these lawyers also serve as vectors of influence in France. By a kind of mirror effect, they are judged by their real or supposed capacity to convey messages to France’s top political leaders, in some instances via very active freemasonry networks. The reputation of these masters of influence and law rises and falls in line with changes in France’s political leadership. We have included the 10 most influential of them here.

Fiscal specialist Claude Dumont-Beghi came into this exclusive club late when she took on the defence of Gabonese president Ali Bongo but her colleagues Jean-Paul Benoit, Christian Charriere-Bournazel andWilliam Bourdon, who are close to the French Socialist movement, have handled a whole collection of cases forAlassane Ouattara and Patrice Talon. Others, who already have well-established African credentials, like Jean-Pierre Versini-Campinchi, Pierre-Olivier Sur, Francois Meyer and Pierre Haik continue to be called in by such presidents as Denis Sassou Nguesso, Macky Sall, Blaise Compaore, Ibrahim Boubacar Keita and Faure Gnassingbe. Other younger lawyers have also succeeded in in establishing themselves as the exclusive representatives of African heads of state in France. Such is the case for Jemal Taleb, defence counsel and legal adviser to Mohamed Ould Abdel Aziz.