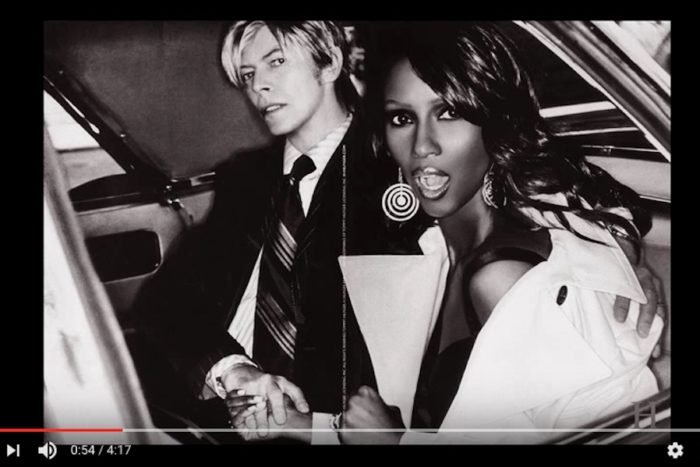 Speaking the language definitely has its benefits: being able to communicate with family members back home, being multilingual in general, and the third, which is my favorite:talking about someone without them knowing. Mostly, Somali allows me to express myself without the whole English-speaking world understanding. As much as I love this, life would be easier if the English language had similar words. So I went to Twitter and connected with Somalis around the world, asking them, ”What’s one Somali word you wish was in the English language?” Here are their top five suggestions:

Screenshot of a YouTube tribute to the young David Bowie and Somali supermodel Iman Abdulmajid.

Ever have friends your parents don’t like because they think they’re a bad influence? Somali has a term for that. Ciyaal literally means “kids” and suuq means “store.” It’s less offensive and a bit funny in Somali: “Why are you hanging with those ciyaalsuuq?” Just know if you have ever been called that, it’s time for some daqan celis.

Daqan celis (pronounced “duh-ken-AW-liss”) is the Somali expression I use the most when speaking English. Literally translated as “culture back,” it is used in multiple contexts. Daqan celis , as in “OMG, my kids are going to be daqan celis,”describes the process of kids in the Somali diaspora forgetting their culture and needing to be sent home to get it back. It’s also used to describe people who can’t speak the Somali language: basically a nice way of saying you’ve gotten way too Westernized.

3. Abti/Adheer/Eedo/Habo — aunts and uncles on both sides

From left to right, the author, her Aunt (Eedo) Fahima Ibraahim and cousins Ilhan Ali and Asma Ali. (Photo courtesy of Ahlaam Ibraahim)

The Somali language is more descriptive than English. We describe our uncles and aunts from our maternal and paternal side differently. Abti (“ub-tee”) is what you call your uncle from your mom’s side, while Adheer (“uh-there”) is your uncle from your dad’s side.Habaryar (“Hub-bar-yaar”) or Habo (“huh-bo”) mean either your mom’s sister — or any Somali lady you see on the street — whereas Eedo is an aunt from your dad’s side. It’s easy to mix these up, but really useful at times. For example: If I’m speaking to my sister in English and state “Aunt Faduma got me flowers,” my sister wouldn’t know which aunt Faduma I’m talking about, but using Somali, I can specify what side of the family she’s on.

VIne and YouTube celebrity “Sadia Arabia” has made a career out of making fun of the Somali generational divide in America. (Screenshot from Vine)

Kullaha (pronounced “koo-luh-ha”) means “said” or “says.” It’s just 10 times better in Somali! If you are mad and want to imitate someone, you will roll your eyes and addkullaha, repeating what they said. (Somalis can be a little feisty, you know). For example, when someone says something really annoying, I will say, “Kullaha ‘no school tomorrow’ (rolls eyes). You think you smart?‘ or “Kullaha ‘I finished your cookies.’ Are you serious?” Obviously, in Somali it makes much more sense and is a bit feistier, but this expression definitely adds the spice.

Wallahi (pronounced “wah-luh-hee”) is Arabic but we Somalis have our own version adding the “i” at the end. This has to be the most commonly used Somali expression. Many classmates and non-Somali friends at Rainier Beach High School started using this word because of the number of times they’ve heard Somali students say it.  It means “I swear to God”. Somalis swear to God a lot. If you ever hear someone saying wallahi,they aren’t lying, they are trying to show that they’re being honest by swearing to God!

Our “Somali 101” class is sadly coming to an end. Let’s end things off by listening to my favorite Somali artist Maxamed BK telling us to welcome the new life.