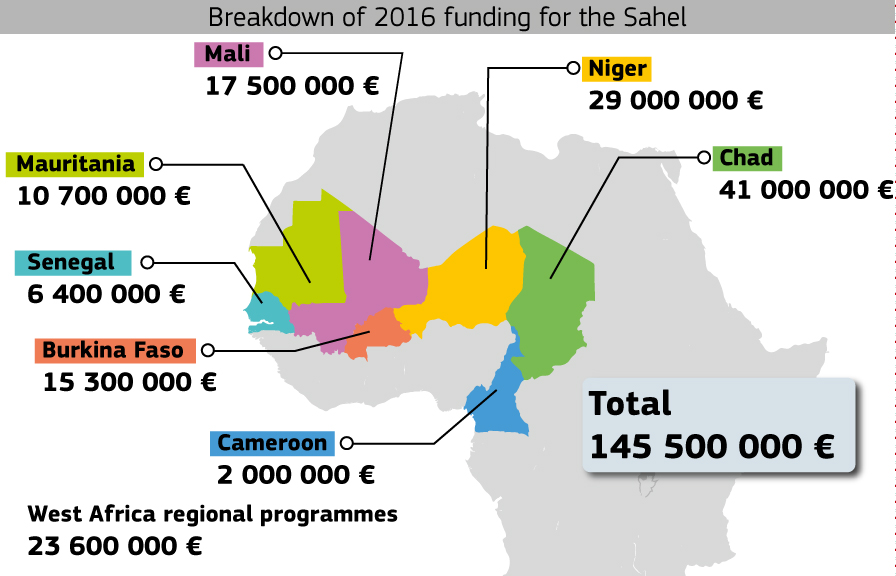 Today the European Commission has announced over €145 million in humanitarian assistance for Africa’s Sahel region in 2016 to address the basic needs of the populations, tackle malnutrition and provide food to the most vulnerable people.

“Saving lives continues to be the EU’s first priority in Niger and the Sahel region. Our new humanitarian funding will provide essential nutrition and health treatment to young children and their mothers, water, sanitation and hygiene as well as training and support to health centres. The EU is working hand in hand with humanitarian organisations to help the most vulnerable“, said Commissioner for Humanitarian Aid and Crisis Management Christos Stylianides, who is currently in Niger visiting EU-funded aid projects.

Overall, funding will be provided to people in need in seven countries: Niger, Burkina Faso, Mali, Mauritania, Senegal, Chad and Cameroon. The Sahel is one of poorest regions in the world, with 2 million children severely malnourished and more than 6 million people in need of emergency food assistance.

The amount of €29 million will be allocated to the most vulnerable individuals in Niger. The country is facing persistent acute food insecurity, child malnutrition and the displacement of people fleeing conflicts in neighbouring Mali and Nigeria.

The Sahel region continues to face a food and nutrition crisis. The prospects for 2016 are worrying, as surveys conducted in 2015 indicate a continuous increase in the number of children affected by severe malnutrition in many countries in the region. The situation in northern Nigeria, Niger, Chad and Mali is critical. Emergency needs in the Sahel will persist unless the root causes of food insecurity and malnutrition are addressed and the resilience of the most vulnerable is strengthened. The European Commission has supported the creation of the Global Alliance for Resilience (AGIR) in West Africa which has set a ‘zero hunger’ goal by 2032.

The Mysterious Disappearance of Two Indian Tourists in Kenya