A Calgary man who wanted to bring his kids to Canada from Somaliland was told they would have to get a DNA test first.

But that would have required his young children to travel through a part of the world so dangerous the federal government warns Canadians against travelling there.

Faysal Hajidiriye and his wife, Nimo Ali, tried for more than three years to get Immigration, Refugees and Citizenship Canada (IRCC) to allow their children — Khalid, 7, and Suleka, 5 — into Canada.

It was only after contacting Go Public that they got the results they hoped for.

“Every single day, seven days a week, the kids are asking us, why did you abandon us? That is the hardest thing as a parent to find an explanation for,” Hajidiriye told Go Public. 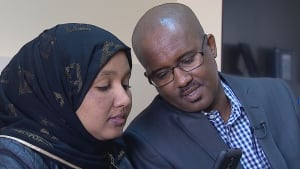 With their kids living with their grandparents in Somaliland, daily Skype sessions were the only contact Canadian parents Nimo Ali and Faysal Hajidiriye had with their two children. (CBC)

The longtime Canadian citizen came to Canada from Somaliland as a teenager, was educated in Ottawa, and graduated from Carleton University with an engineering degree.

He met his wife during a trip to his birthplace, and they married and had a son and daughter.

Hajidiriye spent years going back and forth between Canada and Somaliland until he got a full-time job in 2012 and saved enough money to bring his family to Canada.

She believed her children would follow within two months. The children remained in Somaliland with their grandparents.

Before allowing them to join their parents, the Canadian government wanted a DNA test to prove the children belong to Hajidiriye.

It was a surprising request, he says, since a few years earlier, the government had approved and paid for a paternity leave so he could spend time with his then-newborn son in Somaliland.

That aside, Hajidiriye said he was more than willing to have the test done.

“We’re not asking [IRCC] to bend the rules, to make exceptions to the rules,” he told Go Public.

“We’re saying for the love of god, use common sense, we cannot risk the safety of our children, so we either do the DNA test here in Canada, or we do it in Hargeisa, Somaliland.”

No embassy in Somaliland

There is no Canadian Embassy in Somaliland, so IRCC’s request meant the children would have to be taken on a 4,000-kilometre round trip to neighbouring Ethiopia on dangerous roads where travellers are commonly ambushed and attacked.Almost the entire route from Burco, Somaliland, where the children were staying, to the Canadian Embassy in Addis Ababa, Ethiopia, is under some level of travel warning from the Canadian government. (CBC)

Hajidiriye says he and immigration officials were at a stalemate for years, with his letters to IRCC going unanswered.

“I have their tracking numbers; they have not responded to a single one of them,” he says.

“If you file a complaint about [IRCC], you will get a response, a computer-generated response that’s literally … like, there’s no human being,” Hajidiriye says.

Go Public contacted Immigration, Refugees and Citizenship Canada about the case, and days later, the agency contacted Hajidiriye and got things moving on the file.

A few months later, Hajidiriye was on a flight to Somaliland to collect his children, their Canadian passports and citizenship certificates in hand. No DNA test required.

Go Public was at the Calgary International Airport on Sept. 8, when the children arrived with their father.

“It’s the most exciting time in my life. Having these two kids with me is something I’ve been fighting for for the last 3½ years. It’s finally a reality,” Hajidiriye says. 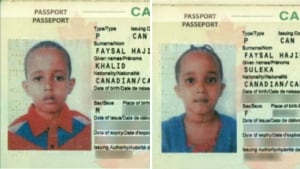 Khalid, 7, and Suleka, 5, received their Canadian passports on Aug. 31 and arrived in Canada Sept. 8.

“If it hadn’t been you guys getting involved, I guarantee you, my kids would not be here today.”

Hajidiriye says he’s also grateful to immigration officials for their work reuniting his family in Canada.

According to Vancouver immigration lawyer Zool Suleman, this is not a unique story. 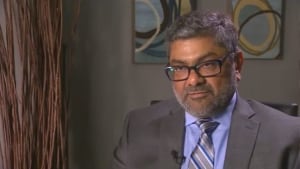 He says every month thousands of people trying to access the immigration system are shut out.

The problem, according to Suleman, is Canada’s immigration department becoming increasingly automated, partly, he says, due to cost cutting.

“There is a replacement of humans with algorithms and web interfaces and portals,” he said.

Suleman says IRCC’s website gets a million hits a month and the automated system can effectively deal with the files of 80 per cent of applicants, but that neglects the remaining 20 per cent, usually people who are facing more complicated situations.

“That’s hundreds of thousand of inquiries that are not being met,” Suleman told Go Public.

“And that’s a perfect recipe for a crisis. A crisis in the system, and a crisis of confidence for people who want to use immigration services.”

“By stepping up our modernization efforts, we have reduced overhead costs while continuing to streamline programs and operations,” wrote IRCC communications adviser Nancy Chan in an email to Go Public.

“The government of Canada continues to take action to more efficiently process immigration applications in order to provide greatest value for money for taxpayers and improved service to individuals.”

Rosa Marchitelli has more than a decade of experience reporting and in the anchor chair. She is currently host of the CBC News segment Go Public. Go Public stories come almost exclusively from people who write in story ideas. The segment seeks to shed light on untold stories that are of public interest and hold those responsible accountable.