Hungary’s parliament has rejected an attempt by Prime Minister Viktor Orban to block the settlement of refugees.

His ruling Fidesz party failed to attract the two opposition votes necessary for a two-thirds majority in parliament.

The bill had sought to rebuff an EU-set quota scheme that would relocate 1,294 refugees in Hungary.

It was the latest move in Mr Orban’s anti-EU and anti-migrant drive, say correspondents.

But he was thwarted by the anti-immigration Jobbik party, which normally would have been viewed as a natural supporter of the bill but abstained.\

Jobbik argued the immigration ban should apply to all foreigners. 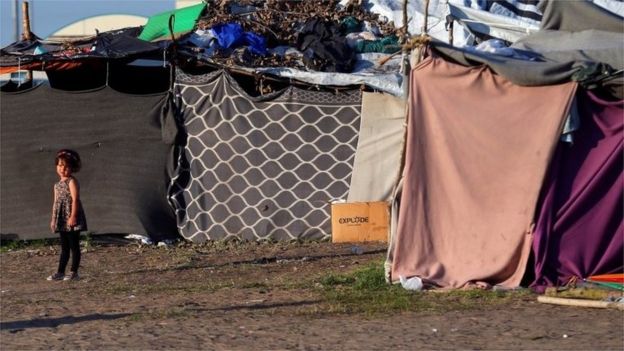 REUTERS. Hungary sealed its borders with Serbia and Croatia after it became a transit country last year

Mr Orban called the vote in parliament after a divisive referendum on 2 October, again over the EU’s 2015 resettlement scheme to relocate 160,000 refugees across the bloc.

Of those who voted, 98% – or 3.3m voters – supported Hungarian Prime Minister Victor Orban’s call to block the quotas. But only 40.4% of voters cast valid ballots, short of the required 50% threshold.

Nevertheless, he declared victory and immediately called the constitutional vote.

This is the second blow in a month for Viktor Orban, following the failure of his 2 October referendum.

Now he can be expected to turn his guns on the Jobbik party for their “treachery” for refusing to support the constitutional amendment. 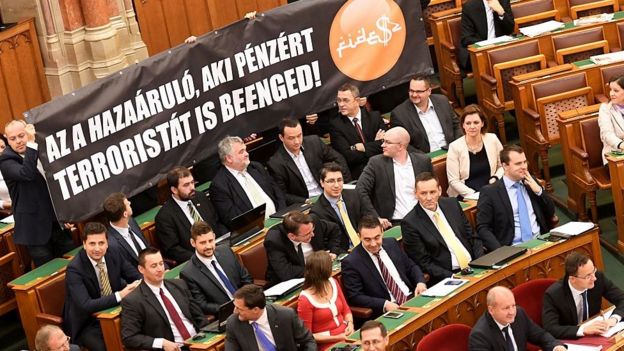 AFP. Members of Jobbik – the radical-right challengers to Mr Orban’s Fidesz party – held aloft a banner during the vote, reading: “The traitor is the one who allows terrorists into the country for money”

Jobbik were prepared in advance for that accusation.

As the results of the amendment vote were announced, Jobbik deputies unrolled a banner with the words: “The traitor is the one who allows terrorists into the country for money.” According to Hungarian reports, a Saudi citizen who once had business contacts with Osama Bin Laden and who is also on an FBI wanted list, bought residency in Hungary under the bond scheme.

Hungary has already refused to accept 1,294 asylum seekers requested by the European Commission. It has taken the Commission to the European Court of Justice over the case, with a verdict expected next year.

If Hungary loses, it will have no choice but to accept the 1,294. If the constitutional amendment had passed now, it would have blocked any future attempts by the EU to impose quotas on Hungary.

Jobbik has been jockeying with the Socialists for position as Hungary’s second biggest party.

Mr Orban’s defeat in Tuesday’s vote is an unusual blow for a man whose party won a two-thirds majority in parliament when he first came to power in 2010 and has since enacted six constitutional amendments.

The setback is likely to herald a period of increasing rivalry between his Fidesz party and Jobbik. 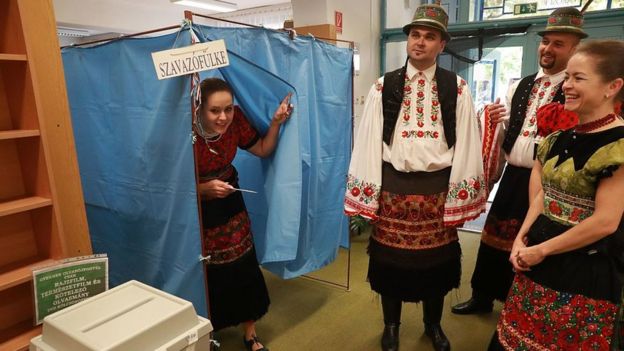 AFP. A referendum on blocking the EU quota took place on 2 October – but turnout failed to meet the required level

Immigration is a key battleground, and the constitutional vote was a chance for Jobbik to flex its muscles, correspondents say.

“We are ready to vote for the amendment of the constitution but we are not ready for partial solutions,” Jobbik leader Gabor Vona said in October. “We can only support a solution which creates Hungary’s real security.”

Thousands of non-EU citizens – many from the Middle East, China and the former Soviet Union – have bought residency in Hungary with the “foreigner bonds”.

Jobbik says more people have come into the country under that scheme than would have come under the EU migrant quota.

But it says it remains willing to support Fidesz’s constitutional amendment if it backs down and scraps the scheme.