Three Kenya Defence Force (KDF) soldiers have reportedly been killed near the Kenyan border with Somalia.

The Kenyan soldiers are said to have attacked an al-Shabaab base near the village of Nusdariq, Gedo region in Somalia.

The KDF soldiers during the engagement with the militants hit a landmine which caused a huge explosion.

Eleven other KDF soldiers were reported to have been wounded during the explosion.

KDF soldiers managed to kill four al-Shabaab militants during the fighting with the rest of the militants fleeing. KDF has not yet released a statement to confirm the attack, which occured on Sunday, January 15, exactly one year after the deadly El Adde attack.

The El Adde attack claimed lives of more than 100 Kenyan soldiers, with several others injured and captured by the militants, after they raided the Kenyan military camp at dawn. 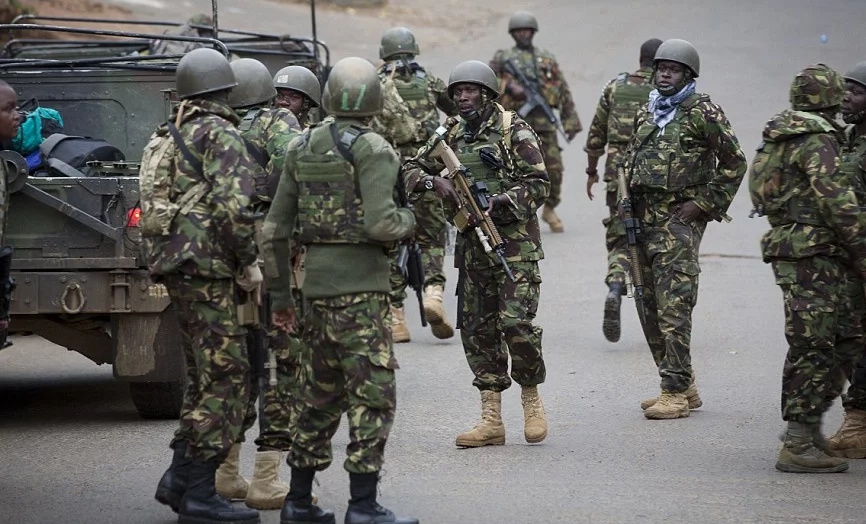 KDF has not yet released a statement to confirm the attack, which occurred on Sunday, January 15, exactly one year after the deadly El Adde attack.

According to residents of Nusdariq, KDF had planned to flush out the militants before a fierce gunfight broke out.

#BREAKING:
3 KDF killed
11 KDF wounded
4 #Alshabaab killed
in a fighting between them in #Somalia's Gedo region near #Kenya border.

Separately on Saturday, January 14, at least two Kenyan soldiers were injured in an IED explosion in same area near Nusdariq village.

“Hundreds of KDF soldiers were seen walking through the forest after the explosions, copters transported the wounded back into Kenya,” VOA journalist Harun Maruf tweeted.

Watch a video of the El Adde attack below.